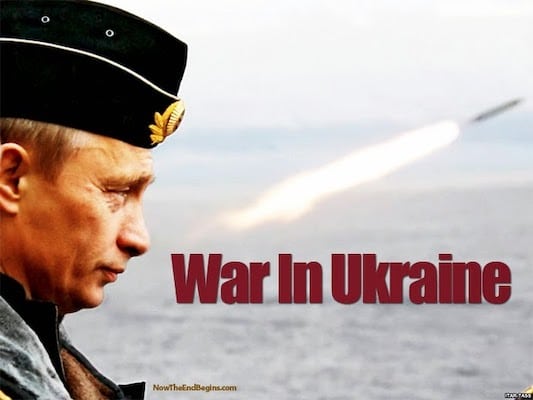 Like Orwell’s ‘Ministry of Truth’, propaganda is pouring out of the U.S. that is shaping our perceptions of the war in Ukraine. It is produced by the CIA, it is pronounced by the State Department and it is published by the media. It is coming from everywhere.

The heroes and the villains were cast from the start. The media rewrote history and created the myth of the “unprovoked war.” As if Russia’s launching of an illegal war was not sufficient to cast them as the villain in our minds, the media everywhere added the adjective “unprovoked” to create the super-villain needed to produce the necessary support for the war. As if NATO had not broken its promise not to encroach on Russia’s borders. As if Russia’s security concerns had not been ignored. As if Russia has not been surrounded by military bases and missiles. As if Ukraine wasn’t being flooded with weapons. As if Yeltsin and Putin had not protested and drawn their red lines for years.

The heroes and villains were further developed and characterized by stories that came out of Ukraine in the early days of the war. On the first day of the war, a Russian ship aimed its guns at Snake Island and demanded the surrender of the Ukrainian forces. Establishing the roles of super-villain and super-hero in our minds, the Ukrainians bravely defied the Russians, and the Russians remorselessly murdered the Ukrainians. The Ukrainian guards “died heroically,” Zelensky said, promising that “All of them will be posthumously awarded the title of Hero of Ukraine.”

But the guards couldn’t be posthumously awarded anything because they weren’t dead. They were captured and released a few days later. But the characters had been cast in our minds. Not enough that the Ukrainians really were heroically defending their land against an illegal and villainous Russian assault, to produce the necessary war fervor, a super-villain was needed.

Only days later, a Russian warship was seriously damaged or destroyed by Ukrainian forces only, like the guards of Snake Island, to seemingly show up a few days later.

The western media would also continue to clean up the story and clarify the hero and the villain by erasing the Ukrainian ultranationalists from history and from the story, from their role in the Donbas to their role in 2019 of pressuring Zelensky out of making peace with Russia and signing the Minsk Agreement to their role today.

But a senior analyst at the Defense Intelligence Agency leaked to Newsweek  that, in the first month of the war, “almost all of the long-range strikes have been aimed at military targets.” A retired Air Force officer, working with a “large military contractor advising the Pentagon,” told Newsweek that “the Russian military has actually been showing restraint in its long-range attacks.” The advisor warned that “If we merely convince ourselves that Russia is bombing indiscriminately . . . then we are not seeing the real conflict.” The Newsweek article points out that the U.S. dropped more missiles on the first day in Iraq in 2003 than Russia dropped on Ukraine in the first 24 days. “The vast majority of the airstrikes are over the battlefield, with Russian aircraft providing “close air support” to ground forces. The remainder–less than 20 percent, according to U.S. experts–has been aimed at military airfields, barracks and supporting depots.” The DIA analyst concluded that “that’s what the facts show. This suggests to me, at least, that Putin is not intentionally attacking civilians. . . . I know that the news keeps repeating that Putin is targeting civilians, but there is no evidence that Russia is intentionally doing so.”

It’s bad. And I don’t want to say it’s not too bad. But I can’t help but stress that beyond the clamor, we are not seeing the war clearly. Where there has been intense ground fighting and a standoff between Ukrainian and Russian forces, the destruction is almost total. But in terms of actual damage in Kyiv or other cities outside the battle zone, and with regard to the number of civilian casualties overall, the evidence contradicts the dominant narrative.

According to Washington and the media, Russia was not only targeting civilians from the very beginning of the war, they were also planning possible chemical weapons attacks. President Biden, himself, claimed that Putin was considering using chemical weapons in Ukraine. But a “senior U.S. defense official,” in a leak that was reported by Reuters on March 22, said that “There’s no indication that there’s something imminent in that regard right now.”

Two weeks later, “three U.S. officials” told NBC News that “there is no evidence Russia has brought any chemical weapons near Ukraine.” It was disinformation intended, they said, “to deter Russia from using banned munitions.”

The disinformation campaign is being coordinated by the White House National Security Council. The released declassified information, the officials said, “wasn’t rock solid:” they were publicizing “low-confidence intelligence.” It was propaganda being used in the disinformation war against Russia. But that disinformation is being consumed by the U.S. public and shaping its perceptions of the war to create the necessary war fervor.

The promised false flag attack against the Russian speaking people of the Donbas that would justify the Russian invasion and feature video of fake corpses, “never materialized.”

The U.S. also tried to “get inside Putin’s head” and, perhaps more importantly, shape public perception in the West of a weak, incompetent and disconnected Putin, by releasing intelligence that discovered that Putin is being misled by his advisors about Russia’s military performance in Ukraine. While some officials said that intelligence was reliable, others said it “wasn’t conclusive–based more on analysis than hard evidence.” When questioned, Biden later classified it as “speculation” and “an open question.”

Another case of disclosing disinformation in an attempt to warn China, to negatively shape public perception of China and to continue to attempt to drive a wedge between Russia and China was the claim by U.S. officials that Russia had asked China to supply weapons. European and U.S. officials told NBC that that accusation “lacked hard evidence” and that, in fact, “there are no indications China is considering providing weapons to Russia.”

While U.S. officials say the disinformation war is meant to deter Russian actions and to get inside Putin’s head, it is simultaneously being consumed by Americans and getting inside their heads, shaping their perceptions of Putin, Russia and the war.

The shaping of the American mind by the media has a long history in the CIA. In the first quarter century of the CIA, according to Carl Bernstein, “more than 400 American journalists . . . carried out assignments for the Central Intelligence Agency, according to documents on file at CIA headquarters.” Occasionally, “full‑time CIA employees masquerad[ed] as journalists abroad.” Cooperation included articles written by the CIA running almost word for word under columnists’ bylines and “planting misinformation advantageous to American policy.”

The disinformation war was not confined to new organizations. The Church Committee found that, by the end of 1967, the CIA had already subsidized the publication of well over one thousand books.

By 1955, the CIA was collaborating with Hollywood to shape the American mind through movies. In Finks: How the CIA Tricked the World’s Best Writers, Joel Whitney says “the goal was ‘to insert in their scripts and in their action the right ideas with the proper subtlety’.” The Joint Chiefs of Staff plotted on how to insert those ideas and actually met with top Hollywood figures at the MGM Studios office of director John Ford. The CIA would go so far as to have operatives infiltrate Hollywood studios. Paramount Studios even had an executive and censor who was a CIA operative who made sure Paramount’s movies cut out any anti-American content or criticism of U.S. foreign policy.

So, where’s the truth. For most Americans, being informed citizens of the world and informed participants in democracy means turning to the newspapers and news outlets. But those newspapers and news outlets are reporting disinformation emanating from the CIA, the State Department and the White House that is shaping the perceptions and the minds of the American people.

Ted Snider has a graduate degree in philosophy and writes on analyzing patterns in U.S. foreign policy and history.