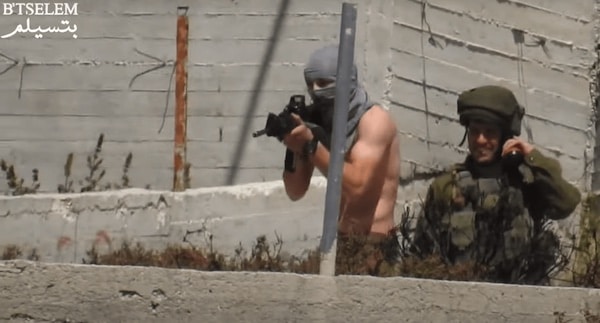 B’TSELEM IMAGE FROM MAY 14, 2021 OF A MASKED SETTLER WEARING MILITARY TROUSERS INVADING THE PALESTINIAN VILLAGE OF ‘URIF IN THE OCCUPIED WEST BANK AND FIRING ON PALESTINIANS AS AN ISRAELI SOLDIER WATCHES. SCREENSHOT.

It is not beyond my comprehension to understand the policies of the Israeli government in light of Jewish history under the Nazis. We know Jews have suffered and have been victims. Is it that mentality behind the walls, the indescribable destruction, loss of land, houses, deaths, the decrepit prisons of torture? Are Jews really still victims of paranoia and fear?

Nationalism revisited is now twisted into a parody of the Nazi credo, “Deutschland uber alles” extolling Germany over all others, with only pure Germans as inhabitants. How is it possible that Israeli Jews, whose ancestors have been victims of the worst nightmares of the Final Solution, can turn away in blind denial? “Get rid of the undesirables who are beneath contempt.” It is all so familiar yet cruelly deranged how a once-hunted people have become hunters and haters. In my view, this hatred has been projected onto the “other,” a Palestinian.

Many older generations of Jews (certainly not all), their psychology and work left undone, still carry with them scars of the Nazi Holocaust that has remained imprinted and lives in forms of guilt, victimhood and fear of another Holocaust brought on by the enormous antisemitism of today. They must protect Israel for they hear, “without Israel there would be no safe Jews.” These fears are exported within the context of Zionist racist ideology. The cycle of abuse plays out endlessly, and this is how I understand Palestinians to be the last victims of the Holocaust.

It is a painful to attempt to understand what drove the Zionist movement on its determined path to have a Jewish nation state acquired through brute force and violent occupation. I look through a window whose shades have been drawn under the guise of the only democracy in the middle east. The shades can no longer hide the window of despair unless one refuses to see the truth. True Zionist nationalism and apartheid is both violent and racist. It lives to destroy. If you have not been there, including the misery of Gaza, it can be difficult to understand as truth becomes distorted and lies translate to what one wishes to see. The hatred of Palestinians has been so manipulated throughout Israel, Europe and the U.S.. I as a Jewish refugee from Nazi Germany cannot help but see an echo of early Nazi Jew hatred. I fervently believe these systems destroy the fabric of what it means to be an evolved human being.

Archbishop Desmond Tutu, the South African anti-apartheid and human rights activist, said of Zionist Israel, “This is apartheid, like ours, only worse.” It is only when Israel/Palestine become a unified country living with dignity and equal rights that there can be change. Now there is one-state Israel, an apartheid state. To declare Israel an apartheid state is unbearable but it is the truth. We need to mobilize international pressure along with churches for a binational democratic state in Israel. I believe it is only the outside world that can force change.

Yes, it is time to step back and reflect, to let go of moral superiority and to remember that we are all connected. We must remember who we are. Zionism was once created to be a safe haven for Jews within a model of a secular nation state. What is that? A nation state for me has resulted in mass evictions of other nationalities and ethnic cleansing. Do Jews who have been victimized have the moral right to occupy and disenfranchise another people?

Nothing about the characterization of Palestinian life is based on reality. It is a myth, a means to end the Palestinian “problem.” It is a fearful and extremely dangerous road. What needs clarification over and over again is that blinded supporters of Zionist Israel are by the very nature of their support complicit with Zionist Israel’s war crimes. To pretend Israel is a peace-loving democracy is to be cajoled into a deception. Claiming that what has been done to Palestinians by Zionists is done in the name of Jews is false. What is being done to Palestinians by the Israeli Zionists will never be in my name as a Jew or as a human being.

Zionism in its attempt to hide behind the shade of normalcy is the Nakba, a catastrophe for Palestinians who once lived a rich life on land they called their own. It is also the despair of human rights activists vilified as antisemites, labeled delegitimizers, terrorists and dangerous in order to hide the truth of Israeli crimes. It is the despair of Jews afraid to see the truth of Zionism that is so consumed with racial hate.

The nightmare is leaking through the false pretend Democracy. Zionism can no longer hide its agenda of a Jewish only state with echoes of “judenrein” from another time. I understand this as an aberration, a missing piece of humanity that has led descendants of the final solution to engage in the actions as victimizers and killers while filled with righteous hate. It all sounds too familiar. I remember and then I know despair, for the Palestinian story is also my story.

Lillian Rosengarten is author of the book “Survival and Conscience: From The Shadow Of Nazi Germany To The Jewish Boat To Gaza.“(October 2015, Just World Books) It has been published in German. (Zambon 7/14).