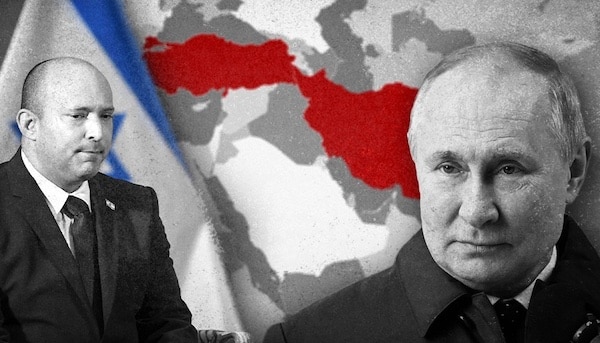 Winners and losers: West Asian geopolitics are shuffling during the Russia-Ukraine conflict, as states are increasingly forced to take sides. (Photo: The Cradle)

The closure of Turkey’s air space to all Russian aircraft has not come as a surprise to Moscow, which is aware that Ankara and Washington are involved in a new dalliance and that there is a full spectrum calibration of Turkish regional policies under way.

The best evidence of it is that President Recep Tayyip Erdogan now says that a “reasonable, consistent and balanced relationship” with Israel is the only way to effectively defend the Palestinian cause, while Ankara’s rapprochement with Jerusalem solidifies despite intense tensions over the Al-Aqsa Mosque.

However, the closure of Turkish air space to Russian planes has broader regional implications. Russia has bases in Syria and although the conflict in that country has subsided, it remains “kinetic” with Turkey on the prowl with a large force of Syrian rebels it has trained and equipped over the last few years–at least 20,000 fighters following a unified command structure under what is being called the Syrian National Army.

Suffice to say that Moscow, which anticipated the non-availability of the Turkish air space sooner or later, would have worked out alternate arrangements. The air route via the Caucasus and Iran is one option. Of course, Moscow and Tehran have congruent interests that the military balance in Syria should not tilt, although some redeployment of Russian forces from Syria to the conflict zones in Ukraine is to be expected.

Collaterally, Iran’s role as a stabilizer in the Syrian situation can only become more prominent. Meanwhile, Erdogan sees a window of opportunity to tiptoe around the presence of U.S. and Russian forces in northern Syria and take control over the Kurdish autonomous regions. Turkey has also moved hundreds of troops, armor, and firepower to boost its presence around Idlib in northwestern Syria, which, if Ankara fails to reach an understanding with Russia, could come under attack.

There was a time until recently when Moscow and Washington stood in the way of any Turkish offensive to take territory from Kurdish forces. But that looks like a bygone era now. Turkey finds itself in a far better position than ever before to cut the Gordian knot that thwarted its ambitions and delayed any large scale offensive to pursue those ambitions in northern Syria.

An opportunity for Iran?

This evolving segment of the Syrian conundrum must be bothering Iran. However, no less significant is the contradiction regarding Russia’s relations with Israel, which provided the latter the space to attack Iranian assets in Syria.

Iran is intensely conscious that Israeli intelligence is ’embedded’ in U.S. bases all across the region, which not only gives cover for intelligence gathering but also grooms Israel, as it were, for future roles as a subaltern of the U.S. Central Command (CENTCOM)–the U.S. military’s command center which covers activities from Egypt and West Asia to Central and South Asia.

Last year in January, the Pentagon reported a change in the Unified Command Plan shifting Israel from U.S. European Command (EUCOM) to CENTCOM in a move envisaging the “strategic upgrade” of that country’s future role in West Asia as Washington pays greater attention to the Indo-Pacific.

All things considered, it must be a welcome development for Iran that there is greater clarity now about the limits to the Russian-Israeli relationship. Israel tried hard initially to remain neutral in the conflict between Ukraine and Russia and even projected an aspirational role as facilitator-cum-mediator. But the Biden Administration would have none of it and has come down on the Naftali Bennett government like a ton of bricks, demanding that it must behave like any subaltern is expected to do.

Israel-Russia relations are being tested

Israelis are realists. Which is why Foreign Minister Yair Lapid went down on his knees to explicitly accuse Russia of war crimes in Ukraine. But in the process, Lapid went somewhat overboard, as he chose a venue in Greece in the presence of his Greek and Cypriot counterparts to lambast Russia:

A large and powerful country has invaded a smaller neighbour without any justification. Once again, the ground is soaked with the blood of innocent civilians. The images and testimony from Ukraine are horrific. Russian forces committed war crimes against a defenceless civilian population. I strongly condemn these war crimes.

Lapid, a former general himself who is no stranger to war crimes, probably ingratiated himself personally with the Russophobic “hawks” in Washington, being Israel’s next prime minister. But he twisted the knife deep into the Russian consciousness. And Moscow’s reaction has been swift.

Not only was the Israeli ambassador summoned by the Russian Foreign Ministry but two other things happened in quick succession. First, in a not-too-subtle hint, Admiral Oleg Zhuravlev, the deputy chief of the Russian Centre for Reconciliation of the Opposing Parties in Syria, disclosed that  a Syrian-operated, Russian-made Buk M2E air defense system had recently intercepted a guided missile fired from an Israeli F-16 fighter jet in Syrian airspace.

The disclosure of the Syrian interception was as good a warning as there could be that Russia might no longer tolerate future Israeli strikes against targets in Syria (which are mostly Iranian assets.)

Second, Putin himself appeared on the scene writing a letter to Bennett demanding that Israel should transfer control of Jerusalem’s Church of St. Alexander Nevsky to Russia, as was promised by Netanyahu as part of a deal two years ago to win the release of an Israeli-American national detained in Russia on drug charges.

This latter issue will be a bitter pill for Bennett to swallow–to transfer to Russia the custodianship of the church located in Jerusalem’s Old City. The church is of exceptional importance to the Russian Orthodox Church and is a place of pilgrimage for Orthodox Russians who are inextricably linked with the rising tide of Russian nationalism.

A Voice of America report lost no time in noting that “the issue is one of the latest flashpoint in the increasingly contentious relations between the two countries during the Russian war against Ukraine.”

While Israel has a parochial and time-serving foreign policy, what distinguishes Iran’s compass is its sheer breadth of strategic vision. Iran understands perfectly well that the west is pursuing dangerous intentions in the Ukraine crisis.

Tehran sees through “the west’s strategy of turning Ukraine into a deadly quagmire for Russia to create the conditions for the west to play a more active role on the world stage, especially in the eastern hemisphere, by removing it from the list of major players on the international stage,” as an influential Iranian commentator wrote last week.

Conceivably, Iran’s best hope and interest would lie in Russia’s success in overcoming the crisis which may lead to a reset of the world order in the direction of greater multipolarity away from the prevailing western-led political and financial systems.

Evidently, the Biden administration is taking its own time to reach an agreement with Iran on the lifting of sanctions against Iran. It is baiting Tehran with patently-contrived, fantastic propositions almost on a daily basis: while Washington may remove the Islamic Revolutionary Guard Corps (IRGC) from the terror list, its elite Quds Force shall remain branded as such; and so forth.

However, the heart of the matter is that the Biden administration’s foreign policies are currently Russia-centric (rather, ‘Putin-centric’) and will remain so for the foreseeable future. Washington is seeking reasonable certainty that Iran is willing to distance itself from Russia. The specter that haunts the Biden administration is the sheer possibility of two energy superpowers–with ideological affinities for a just and equitable world order and multipolar trade and currency regimes–working in tandem, which the U.S. is hard-pressed to counter effectively.