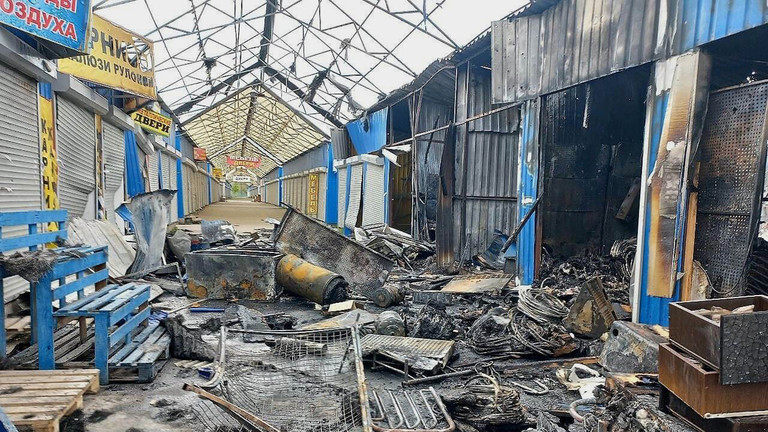 When artillery hit a busy public space in Donetsk, it brought flashbacks of attacks in Gaza and Syria

If the Donetsk marketplace that was hit by rocket artillery on Thursday had been in a city controlled by Kiev, the names and faces of the five civilians killed would be on all major news sites. But because it was another Ukrainian attack on civilians in the Donetsk People’s Republic (DPR), the deaths and 23 additional civilians injured will almost certainly go unreported, as has the been the norm during the regime’s eight years of the Donbass and Western media’s eight years of ignoring the attacks.

According to the DPR’s Healthcare Ministry,

The strike at the Tekstilschik neighbourhood in the Kirovsky district killed four people on the spot. One patient died in an ambulance during the transportation. 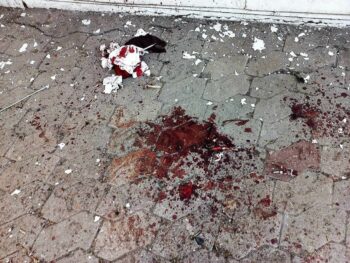 With another journalist, I went in a taxi to the bombed markets. Two of the dead still lay at the site when we arrived, splayed on the ground. The other bodies had already been removed, but traces of their blood remained on the ground, doors nearby were riddled with shrapnel holes and debris from the strike was all around.

Presumably, rescue workers dealt with the injured first and didn’t prioritize retrieving all the dead as further Ukrainian strikes were possible. I saw this during my experience in Gaza, where Israeli’s waited for people to come to the scene of their attack, then bombed again.

According to Gennady Andreevich, a local employee of the district’s safety commission, at 11:40 am Grad missiles struck two different nearby markets: the vegetable and clothing market where the bodies lay, and a household chemicals and building materials market across and down the street. The latter was far more damaged, stalls completely burnt out, but no one was killed there.

Gennady walked with us to the vegetable market, speaking about previous Ukrainian attacks–which have been happening since 2014. More recent shellings hit near a gas station outside the market, at a residential building beyond the market, and in his own market administrative building, killing two colleagues.

He noted that at this time of day the market would have been filled with people, and that Ukraine knows very well what it is firing at.

“They know there is a market here and that from 10am to 1pm there are many people here,” Gennady said as we walked past shops.

This is a completely civilian area, no military installations.

Who else attacks markets and public spaces?

Striking crowded markets and streets at a busy time of the day is something terrorists in Syria did for years, to the silence of Western media. It is something Israel has also done for a long time, hitting residential and public areas of Gaza–one of the most densely inhabited places on earth.

During the 2009 war on Gaza, Israel bombed crowded mosques, hospitals, and buildings housing displaced Palestinians. One of the more notable incidents was when Tel Aviv targeted a UN-run school in Jabaliya sheltering nearly 1,500 people. At least 40 were killed. Another horrific attack on a crowded place was in the Zeitoun district, after Israeli soldiers forced at gunpoint nearly 100 of the extended Samouni family into one home and later bombed it, killing 48 members of the clan.

During the war, I accompanied medics in their ambulances, documenting Israel’s war crimes. A medic (Arafa abd al-Dayem) I had accompanied was killed one day when the Israeli army fired a prohibited flechette (dart) shell directly at him and the ambulance he stood beside. The following day, Israel struck the crowded mourning tents, also with flechettes, killing six and injuring 25 of the relatives and friends who had gathered in one small space to mourn Arafa’s death.

Damascus’ old city is a maze of twisting lanes, overlapping houses, churches, mosques, schools, crowded outdoor eateries, and markets. Terrorist factions occupying eastern Ghouta shelled most frequently when children would be going to or from school, people to markets.

Having spent a lot of time in the East Gate and Thomas Gate areas of the old city, I experienced the shelling and, unfortunately, acquired many accounts of the terrorists shelling crowded places.

Even today, walking around Old Damascus, you’ll find the imprint of mortar blasts. And if you do walk those lanes, you’ll see how crowded they usually are, meaning many people would have been injured and killed per single mortar blast.

In mid April 2014, for example, they hit an elementary school and a kindergarten, killing one child and injuring 65 more, just some of the countless children killed and injured by shelling over the years.

Incidentally, I later wrote about how the BBC were present at the same hospital where I saw these injured children, and were told explicitly that terrorists were mortaring the city every single day. The BBC article that later followed included the line:

the government is also accused of launching them into neighborhoods under its control.

I also wrote about terrorist bombings of Aleppo, citing one day in November 2016 when I was in the city, which by the end of the day killed 18 and injured more than 200 civilians. These were some of the nearly 11,000 civilians killed in Aleppo alone by terrorist attacks on homes and public places.

I could continue citing such acts of terrorism in Syria, in Palestine, elsewhere, but I’ve made my point: when Ukraine bombs a crowded market, it is an intentional act of terrorism. As is Ukraine’s relentless bombing of homes in the Donbass republics these past eight years.

Western Media won’t report on this; Western politicians won’t condemn this; virtue signallers won’t speak about this. And when you actually go and document it, they will silence you relentlessly.

My initial tweet about the market attack was predictably trolled, with comments claiming the bodies were fakes, the bombing never occurred, “prove it” sort of remarks.

Since my observations and photos, as well as Gennady’s testimony, will still not be proof enough, in my video I also included footage taken by a local who was in the market when it was bombed and filmed the immediate aftermath. Gennady himself showed photos on his phone of firefighters dousing the flames, and scenes of the wounded and dead, clearly surrounded by new bomb debris.

But this is what we’ve come to today: Ukraine, often using weapons acquired from the West, can continue to bomb busy civilian areas of the Donbass republics, killing still more civilians, and not only do the hypocrites of the West so keen to accuse Russia of war crimes (which they can never prove and often contradict themselves over), but media and troll farms work in lockstep to gaslight the public and whitewash Ukraine’s war crimes.