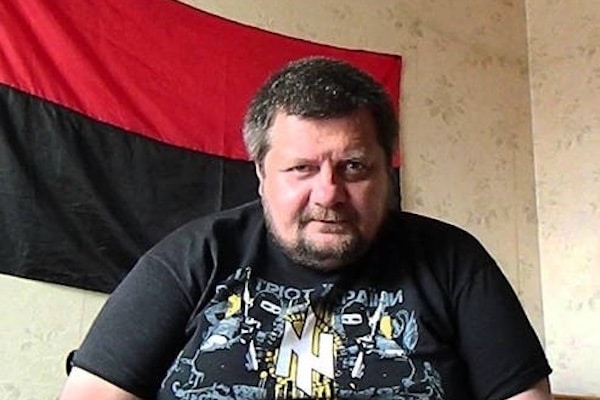 If you do not know this sordid character, you should know that the man is one of the leaders of the neo-Nazi party Pravy Sektor, a party that is very influential in military circles and very active in repression and assassinations. Pravy Sektor units were at work on the Donbass front, in Mariupol in particular, but also in all the cities of Ukraine to repress and persecute ethnic Russians, who would have had the intention of resisting, even through their culture or their language. Activists of this anti-Semitic and ultra-violent party participated not only in the Mayan, but also in the massacres in Odessa (May 2, 2014), and then in Mariupol (May 9), not to mention of course the Donbass. In my continuing research to try to show that decidedly yes, there are many neo-Nazi and ultra-nationalist extremists, here is now a character who is a caricature in his own right, Igor Mosyichuk.

From the nostalgic UPA massacres to the National Socialist Party of Ukraine. Mosiychuk was born in 1972 in the Poltava region of central Ukraine. Unlike many ultranationalist leaders, he did not study, but did his military service in the Soviet army. It was after the army that he started militant activities, first as an author of articles in an oriented press, advocating the ideals of the Great Ukraine, the white superior race, anti-Semitism and ultranationalism. He joined the UNA-UNSO (1994), one of the most violent neo-Nazi parties in Ukraine, which was also led by Yuri Shukhevych, the son of Roman, one of the “heroes” adulated by today’s Ukraine. Shukhevych had been one of the most active participants in the Nazi-orchestrated Holocaust by bullets (1941-1943) on the Eastern Front.  He was one of the worst collaborators of Hitler’s Germany, killed with his weapons (1950). The UNA-UNSO, which was founded in Lvov (1990), provided fighters for the Transnistrian War, a civil war in Moldova which saw the defeat of Moldovan and Romanian ultranationalists who wanted to enslave the ethnic Russians in this region of former Bessarabia. It had also sent fighters to fight Russia in Chechnya, a war that was also lost. The party then campaigned for the rehabilitation of the UPA’s Nazi collaborators (now done), and then sent fighters to Georgia, in a new lost war (2008). In the meantime, the party supported the candidacy of President Yushchenko (whose wife is an American of Ukrainian origin and a CIA agent), before merging with Yaroch’s neo-Nazi party, the Pravy Sektor (2014).

From criminal and terrorist to Maidan glory. However, Mosiychuk followed a different path, joining the National Socialist Party of Ukraine, Svoboda (1998), of neo-Nazi Oleg Tiahnybok. At that time, he integrated the paramilitary organisation of this party, The Patriots of Ukraine, which was dissolved (2004), then re-founded (2005), and officially separated from Svoboda (2007). This branch was indeed even more extremist than this party (that’s saying something!). During this time he first worked as an adviser to Rada deputy Yuri Tyma and had a run-in with the law. He was arrested once for fraud and sentenced to 6 months in prison, but was released thanks to interventions by crooked politicians. A second case soon broke out, being accused of theft (2006), and then for non-payment of alimony, cases which remained unresolved. After Yanukovych came to power (2010), he was soon arrested as a city councilor with two neo-Nazis, Sergei Bevza and Vladimir Spahr, in possession of an explosive device (2011). The investigation revealed that he was planning an attack on the Lenin monument in Borispol, not far from Kiev, as well as a terrorist attack in Kiev on Independence Day. He and his accomplice Bevza were thrown into prison, and remained in pre-trial detention for a long time (2011-2014). The famous Maïdan revolution of “dignity” seriously disrupted his trial, sentenced to 6 years in prison (10 January 2014), the ultranationalist tide swept away everything in its path. He was soon released under the delirious pressure of the armed Maidan militias, and rehabilitated by a law voted by the Rada, declaring a general amnesty for all “political prisoners” (February 2014). Soon, the Kiev Court of Appeal cleared the two men of all charges, and they were finally acquitted (February 2015).

Beatings and death threats in the Rada. Having become an emblematic figure in the Ukraine of the Mayan, he immediately issued threats against Crimea (24 February 2014), indicating that a “friendship train” would come to clean up the peninsula. After the Odessa massacre, he declared that “this was the first victory against the secular enemy”. At the time, he was also deputy commander for public relations of the Azov battalion, which was mainly made up of members of the Nazi party Pravy Sektor, which he himself had joined on his release from prison. He distinguished himself in the Azov uniform by making police officers kneel down, weapons in hand, after they dared to stop his vehicle without a number plate and declared: ‘Now you will remember forever who Azov is’. (22 May).  He had no trouble getting elected to the Kyiv City Council (25 May 2014), and even as a deputy in the Rada (November), soon making a name for himself with incessant provocations. After Ukrainian sabotage in Crimea partially deprived it of electricity, he made the following statement:

In addition to the food blockade of Crimea, Ukraine and Ukrainians must implement three main steps for the rapid liberation of Crimea from the Moscow invaders: 1) continue the energy blockade of Crimea by all possible means, 2) cut off the water supply to the occupied peninsula 3) stop the supply and transit of gas to temporarily occupied Crimea. If the Kiev regime does not take these steps to liberate the peninsula occupied by Moscow’s invaders, Ukrainians have a duty to fight for the liberation of Crimea without any mandate or permission from the ruling authorities. Remember that Crimea must be Ukrainian or deserted.

He then took up the cause of the Chechen Islamists (9 December), welcoming the opening of a second front against Russia, following bomb attacks. A criminal case was opened against him for apology and support of terrorism. He interposed himself between the judiciary and 14 teenagers arrested for destroying a plaque commemorating Marshal Zhukov, and by intimidation obtained their release (May 2015). His boundless violence exploded when, together with another neo-Nazi MP, Andrei Lozovoy, he beat up political opponent Alexander Baraboshko and TV presenter Alexei Durneva (21 July). Still unmolested, he threatened to kill MP and doctor Larissa Kulbatch, saying “I shot people like you”, and then beat a private citizen in his car in Odessa (August). This time, having gone really too far, the Kiev regime, embarrassed by his violent actions and crimes, lifted his parliamentary immunity and had him arrested, after a stormy session punctuated by insults and fights in the Rada (17 September).

In total and absolute impunity. The man was quickly exposed for several offences: corruption following bribes, racketeering, abuse of power in the framework of his functions as a deputy, vandalism and hooliganism, death threats against civil servants, interference in the judicial system and finally threats against magistrates. Like his neo-Nazi comrade, Savtchenko of the Aidar battalion imprisoned in Russia, he went on hunger strike, but had to withdraw his candidacy for the municipal elections in Kiev. Efforts to have him released failed, although the court provided concrete evidence of a bribe he had received (October), but his detention ended at the end of his custody (15 November). Under pressure from Poroshenko’s government, the Supreme Court of Ukraine annulled the vote of the Rada deputies and declared the prosecution of Mosiychuk illegal (March-May 2016), demonstrating, if it were still necessary, that there was a great deal of collusion between neo-Nazi circles and the regime. He continued to make headlines with shameless scandals, first by deserting the Rada benches, and soon photographed on ‘holiday’ in Dubai (October), at the expense of the princess. In trouble, it was proved that he had used a diplomatic passport (which he was not supposed to use), and once again fell through the cracks.

He again assaulted a former parliamentary assistant of political opponent Victor Medvedchuk in the Rada (16 November). He was again caught red-handed, several times, in the Rada, pushing the voting buttons of other deputies (2016-2017), always escaping punishment. He again attacked MP Sergei Kaplin in the Pechersk District Court in Kyiv (18 July 2017). He attacked social democratic party activists in a drunken state, tore up flags and trampled on them, then spat in the MP’s face and threw himself at him. Continuing his circus, during a television broadcast, he attacked the Georgian defector Saakashvili, chasing him with a cane (November), after a memorable spat. He escaped a bomb attack, which killed a police officer and a retired lieutenant-colonel in the streets of Kiev (25 October). Without any restraint, he started a general brawl in the Ternopol Regional Council (5 June 2018), by assaulting a deputy of this council, which ended with chairs. The cup still not being full, he again got into a long brawl with the doctor of political science Semchenko (24 December), live on the TV set of the NewsOne channel. Having been separated and Semchenko having left the studio, he found him at the exit to attack him again with his famous cane.

The end of the show and the return to darkness. At the end of his mandate, he was fined for violating the law on electoral campaigning (12 April 2019), having published information on social networks during the day of the 1st round of the presidential election (31 March). He indicated that he did not want to stand for re-election to the Rada assembly, but was indeed a candidate. He was very cumbersome, literally and figuratively, and having destroyed what little legitimacy he had to sit, he scored only 1% and was finally ousted (May). Russia started a new criminal case against him over the attack he and other neo-Nazi MPs had committed against the Russian embassy in Kiev in 2016 (December 2019). This case led to an arrest warrant issued by a Moscow court (2020). Although he had probably never set foot in the University of Lvov, he had graduated in business law from this university (2017). He reappeared when the Kiev prosecutor’s office announced the end of the preliminary investigation into the attack on him in late 2017. He had stated in this connection that he had been the target of special Russian agents… The prosecutor’s office did not accept this theory and two Ukrainian citizens on the run were to be tried in absentia (17 February 2021).

He has now disappeared completely from the scene, blending into the background and little is visible of him since the heyday of his antics. Very thinned out in the latest photos available, the question remains as to his true geolocation. He had an open conflict with Chechen President Kadyrov, and had threatened each other with death. With the sending of a Chechen division to the field of the special operation in Russia, it is possible that he is on the run… becoming a simple refugee in a hotel in Poland or elsewhere. Still, men like him have been the cancer of Ukraine for years. Enjoying unheard of immunity, even for a Ukrainian thug in his own country, we can honestly question why he has been such an almost unwavering supporter of the Ukrainian regime throughout this period. In 2014, the neo-Nazi party of which he is a member, Pravy Sektor, registered around 350,000 across Ukraine. In the West, and it was a phrase uttered by Laurent Fabius, Minister of Foreign Affairs in 2015:

there are no Nazis in Ukraine but a democratic regime and patriots.