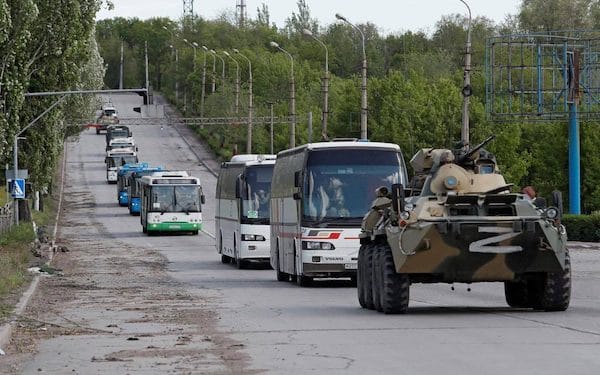 On 16 May 2022, the Ukrainian soldiers still in the basement of the Azovstal factory in Mariupol began to surrender to Russia and the DPR (Donetsk People’s Republic).

While we were in Mariupol to film the reopening of a school on 16 May, we were surprised by the silence in the area around the factory. As a reminder, following the evacuation of the last civilians from the basement of Azovstal, the Russian army was shelling the factory daily to prevent Ukrainian soldiers from setting up new firing positions.

But on Monday 16 May 2022, not a single shot was fired at the factory, no Russian army aircraft flew over Azovstal. Nothing. This silence seems strange to us, but because the telephone network is still fully functional, we cannot get any information on what is happening.

It is only on the way back to Donetsk that we learn that a group of about ten Ukrainian soldiers came out of Azovstal to negotiate with the DPR and Russia.

According to the doctors who examined the wounded, they are in a very poor condition, suffering from malnutrition, which suggests that the remaining Ukrainian troops in the factory will have to surrender quickly anyway due to lack of food.

We therefore returned to Mariupol on the morning of 17 May, hoping to film the surrender of the next group of Ukrainian soldiers still present in Azovstal. Except that the latter refused to leave if they were filmed leaving. Surrender yes, but their surrender must not be too public. So all the journalists present near the factory are sent away, hoping that this will finally push the Ukrainian soldiers to come out.

See the report filmed on site:

A strategy that paid off, as later in the day a new group of Ukrainian soldiers left Azovstal and surrendered. As in the first group, some of them were wounded, some in serious condition, who had to be taken away in the many ambulances that had been brought near the factory that morning.

The others were taken to a penitentiary centre, the time to determine who is who, and what will be their fate. Because among these Ukrainian soldiers (a generic term I use to facilitate the writing and avoid long sentences) there are several categories of prisoners:

1) The fighters of the neo-Nazi Azov regiment, who will have to be judged, and are not exchangeable for Russian soldiers captured by Kiev, as Russia has recalled;

2) Soldiers of the 36th Brigade of the Ukrainian Armed Forces (FAU), who, if they have not committed war crimes, could be exchanged for Russian soldiers, or released at the end of the special military operation;

3) Members of the border guards, who, except for war crimes, could also be exchanged or released at the end of the military operation;

4) And there may also be foreign fighters (mercenaries fighting for Kiev or who knows maybe military instructors or advisors), whose treatment will depend on their status. A mercenary will clearly not be treated by the Russians in the same way as a military instructor or advisor from one of the NATO countries. The media impact will not be the same either.

In any case, what is certain is that contrary to what Zelensky tried to make believe (in a totally delirious way), this is not an evacuation, but a surrender of the Ukrainian soldiers who are in the Azovstal factory. These soldiers are not being sent to Ukraine, but to the DPR and Russia. All the communication strategies that Kiev can use to try to transform this mismanagement into a pseudo-victory will not change this fact, this reality!

Although Volodymyr Zelensky has tried to make people believe that those who are now leaving the Azovstal factory will be exchanged, and will therefore be able to return home, this is not the case for many of them. The fighters of the neo-Nazi Azov regiment, and some or all of the soldiers of the 36th brigade of the FAU, will have to answer for their crimes against the civilians of the Donbass, and will therefore be tried, with no possibility of being released at the end of the military operation or exchanged for Russian soldiers. Potential foreigners present in Azovstal will not be exchangeable either.

At the time of writing we do not yet have precise figures on the number of Ukrainian soldiers who left Azovstal on 17 May. But given the large number of soldiers who were in the basement of the factory (more than 2,000, including nearly 800 members of the Azov regiment) it will take several days to manage their total surrender and send them to hospital or prison, depending on their condition. It will also be necessary to evacuate and identify the 200 frozen bodies present in the factory’s basement.