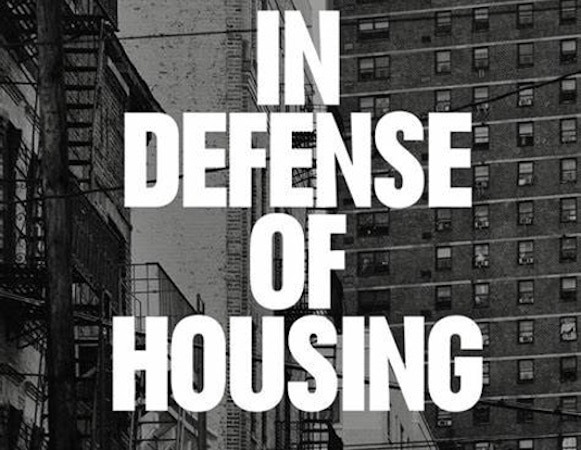 Madden and Marcuse’s essential book on the political economy of housing shows how in an alienated capitalist society, affordable/free housing becomes an “underperforming asset” and gentrification and becomes a “business plan.” From the enclosure of the commons in early modern England to the 20th century trend of deregulation, class war dominates the social relations which determine housing.

America made a neoliberal deal with the devil when it began to whittle away New Deal protections for the vulnerable. The rise of the U.S. prison population and the crisis of homelessness are direct results of this ideology of disposability. In Defense of Housing by David Madden and Peter Marcuse points to the commodification, financialization, and deregulation of the global housing system as some of the roots of modern housing insecurity. In Defense of Housing cites social movements, history, economic data, and social theory to advocate a world where “housing is not real estate, but a home.” (p. 218)

Coming from the Portland, Oregon area, homelessness and gentrification are impossible phenomena to ignore. However, these issues seem to bewilder the middle class people I typically engage with. While I think I’ve long known that capitalism and greed are at the heart of the problem, I also fell into the misconception that the issue of homelessness was “complicated.” The sociologist and urban planner who wrote In Defense of Housing are clearly very well-read and smarter than me on this subject, but reading their book has elucidated how simple the housing crisis actually is. This should be the goal of an academics of liberation: to make comprehensible that which is incomprehensible. “When housing units are bought on the assumption that they can be turned into more liquid commodities, displacement is the predictable result.” (p. 43) Identifying the unequal power relations at play, Madden and Marcuse write that the removal of policies which reign in landowners “shifts power towards power towards capital and away from residents—while also, not coincidentally making land more valuable and more amenable to speculation.” They continue, “The commodification of housing is a political project that refuses to acknowledge itself as such.” (p. 47)

While transnational speculation in the form of private equity drives development projects and raises rents, local communities see their wages stagnant or declining. In class with Poor People’s Campaign co-chair Rev. Dr. Liz Theoharis, Washington state homeless organizer Rev. Sarah Monroe quoted Isaiah 5:8, “Woe to those who attach house to house and join field to field, until there is no more room, and you alone are a landowner in the midst of the land!” Far from the neoliberal claim that the free market is “efficient” and “rational,” Madden and Marcuse write that “developers routinely engage in land hoarding and other strategies centered on speculation and scarcity.” (p. 48) From the enclosure of the commons in early modern England to the 20th century trend of deregulation, class war dominates the social relations which determine housing. One of the many chilling Henri Lefebvre quotes in the book can be found on page 38: “The Olympians of the new bourgeois aristocracy no longer inhabit. They go from grand hotel to grand hotel, or from castle to castle, commanding a fleet or a country from a yacht.” While increasingly less high-end real estate becomes a “primary residence” and increasingly more becomes a “second home,” luxury housing becomes a currency in itself.

The transformation of housing from dwelling to commodity or status symbol is brought out in the first chapter on commodification, and even deeper in the second chapter on “Residential Alienation.” Madden and Marcuse write, “If something is ‘alienable,’ it is exchangeable. It can be bought and sold. Alienation is thus the precondition of all private property.” (p. 56) This theoretical discussion is a powerful counterpart to the materialist grounding of the book. “Feeling at home” is contrasted with the concept of alienation, which economically forces so many to live in overcrowded, unsafe, and inadequate conditions. In an alienated society, gentrification becomes a “business plan.” Affordable homes become “underperforming assets.” Jesus says foxes have holes, birds have nests, but ben-adam “son of man” children of humanity, live without homes. Homelessness is the ultimate expression of alienation. Humanity was not made for society; society was made for humanity. As Jesus says in Matthew 6, we cannot serve both God and wealth. In the same way, housing cannot serve both humanity and wealth. Madden and Marcuse are clear about what is needed: “More than a simple legal claim, a real right to housing needs to take the form of an ongoing effort to democratize and decommodify housing, and to end the alienation that the existing housing system engenders.”
​
The demands of the book include the revitalization of public housing, rent control, public ownership of land, limits on speculation, and breaking the monopoly of for-profit developers. Harlem-based Movement for Justice in El Barrio is cited by Madden and Marcuse, “We all share a common enemy and it’s called neoliberalism.” The MJB document continues, “This displacement is created by the greed, ambition, and violence of a global empire of money that seeks to take control of all the land, labor, and life on earth.” (p. 182) Rather than seeing New York City as a “luxury product” like Mayor Bloomberg (p. 181), our neighborhoods must be understood as the lifeblood of our society—havens for the wellbeing of ourselves and our children. If America’s housing system isn’t working for the least of us, it’s not working for any of us. Like access to healthcare, water, clean air, and electricity, housing should not be an opportunity for corporate profiteering, but a human right.

Zachary White is an M.Div. student at Union Theological Seminary in New York City. From Portland, Oregon, Zac is interested in the history of the  U.S. empire, film, and the Christian liberation traditions which Friedrich Engels traces back to the book of Revelation.