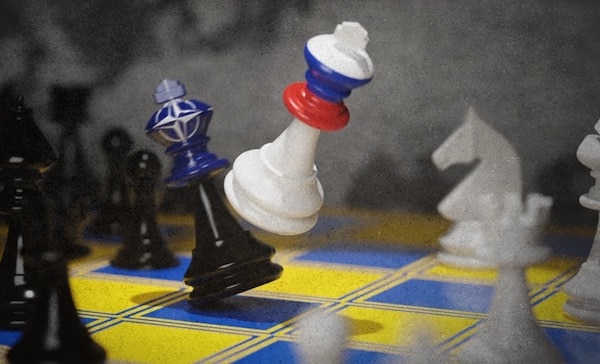 NATO vs Russia. (Photo: The Cradle)

Three months after the start of Russia’s Operation Z in Ukraine, the battle of The West (12 percent) against The Rest (88 percent) keeps metastasizing. Yet the narrative–oddly–remains the same.

On Monday, from Davos, World Economic Forum Executive Chairman Klaus Schwab introduced Ukrainian comedian-cum-President Volodymyr Zelensky, on the latest leg of his weapons-solicitation-tour, with a glowing tribute. Herr Schwab stressed that an actor impersonating a president defending neo-Nazis is supported by “all of Europe and the international order.”

He means, of course, everyone except the 88 percent of the planet that subscribes to the Rule of Law–instead of the faux construct the west calls a ‘rules-based international order.’

Back in the real world, Russia, slowly but surely has been rewriting the Art of Hybrid War. Yet within the carnival of NATO psyops, aggressive cognitive infiltration, and stunning media sycophancy, much is being made of the new $40 billion U.S. ‘aid’ package to Ukraine, deemed capable of becoming a game-changer in the war.

This ‘game-changing’ narrative comes courtesy of the same people who burned though trillions of dollars to secure Afghanistan and Iraq. And we saw how that went down.

Ukraine is the Holy Grail of international corruption. That $40 billion can be a game-changer for only two classes of people: First, the U.S. military-industrial complex, and second, a bunch of Ukrainian oligarchs and neo-connish NGOs, that will corner the black market for weapons and humanitarian aid, and then launder the profits in the Cayman Islands.

A quick breakdown of the $40 billion reveals $8.7 billion will go to replenish the U.S. weapons stockpile (thus not going to Ukraine at all); $3.9 billion for USEUCOM (the ‘office’ that dictates military tactics to Kiev); $5 billion for a fuzzy, unspecified “global food supply chain”; $6 billion for actual weapons and “training” to Ukraine; $9 billion in “economic assistance” (which will disappear into selected pockets); and $0.9 billion for refugees.

U.S. risk agencies have downgraded Kiev to the dumpster of non-reimbursing-loan entities, so large American investment funds are ditching Ukraine, leaving the European Union (EU) and its member-states as the country’s only option.

Few of those countries, apart from Russophobic entities such as Poland, can justify to their own populations sending huge sums of direct aid to a failed state. So it will fall to the Brussels-based EU machine to do just enough to maintain Ukraine in an economic coma–independent from any input from member-states and institutions.

These EU ‘loans’–mostly in the form of weapons shipments–can always be reimbursed by Kiev’s wheat exports. This is already happening on a small scale via the port of Constanta in Romania, where Ukrainian wheat arrives in barges over the Danube and is loaded into dozens of cargo ships everyday. Or, via convoys of trucks rolling with the weapons-for-wheat racket. However, Ukrainian wheat will keep feeding the wealthy west, not impoverished Ukrainians.

Moreover, expect NATO this summer to come up with another monster psyop to defend its divine (not legal) right to enter the Black Sea with warships to escort Ukrainian vessels transporting wheat. Pro-NATO media will spin it as the west being ‘saved’ from the global food crisis–which happens to be directly caused by serial, hysterical packages of western sanctions.

NATO is indeed massively ramping up its ‘support’ to Ukraine via the western border with Poland. That’s in synch with Washington’s two overarching targets: First, a ‘long war,’ insurgency-style, just like Afghanistan in the 1980s, with jihadis replaced by mercenaries and neo-Nazis. Second, the sanctions instrumentalized to “weaken” Russia, militarily and economically.

Other targets remain unchanged, but are subordinate to the Top Two: make sure that the Democrats are re-elected in the mid-terms (that’s not going to happen); irrigate the industrial-military complex with funds that are recycled back as kickbacks (already happening); and keep the hegemony of the U.S. dollar by all means (tricky: the multipolar world is getting its act together).

A key target being met with astonishing ease is the destruction of the German–and consequently the EU’s–economy, with a great deal of the surviving companies to be eventually sold off to American interests.

Take, for instance, BMW board member Milan Nedeljkovic telling Reuters that “our industry accounts for about 37 percent of natural gas consumption in Germany” which will sink without Russian gas supplies.

Washington’s plan is to keep the new ‘long war’ going at a not-too-incandescent level–think Syria during the 2010s–fueled by rows of mercenaries, and featuring periodic NATO escalations by anyone from Poland and the Baltic midgets to Germany.

Last week, that pitiful Eurocrat posing as High Representative of the EU for Foreign Affairs and Security Policy, Josep Borrell, gave away the game when previewing the upcoming meeting of the EU Foreign Affairs Council.

Borrell admitted that “the conflict will be long” and “the priority of the EU member states” in Ukraine “consists in the supply of heavy weapons.”

Then Polish President Andrzej Duda met with Zelensky in Kiev. The slew of agreements the two signed indicate that Warsaw intends to profit handsomely from the war to enhance its politico-military, economic, and cultural influence in western Ukraine. Polish nationals will be allowed to be elected to Ukrainian government bodies and even aim to become constitutional judges.

In practice, that means Kiev is all but transferring management of the Ukrainian failed state to Poland. Warsaw won’t even have to send troops. Call it a soft annexation.

The steamroller on the move

As it stands, the situation on the battlefield can be examined in this map. Intercepted communications from the Ukrainian command reveal their aim to build a layered defense from Poltava through Dnepropetrovsk, Zaporozhia, Krivoy Rog, and Nikolaev–which happens to be a shield for the already fortified Odessa. None of that guarantees success against the incoming Russian onslaught.

It’s always important to remember that Operation Z started on February 24 with around 150,000 or so fighters–and definitely not Russia’s elite forces. And yet they liberated Mariupol and destroyed the elite neo-Nazi Azov batallion in a matter of only fifty days, cleaning up a city of 400,000 people with minimal casualties.

While fighting a real war on the ground–not those indiscriminate U.S. bombings from the air–in a huge country against a large army, facing multiple technical, financial and logistical challenges, the Russians also managed to liberate Kherson, Zaporizhia and virtually the whole area of the ‘baby twins,’ the popular republics of Donetsk and Luhansk.

Russia’s ground forces commander, General Aleksandr Dvornikov, has turbo-charged missile, artillery and air strikes to a pace five times faster than during the first phase of Operation Z, while the Ukrainians, overall, are low or very low on fuel, ammo for artillery, trained specialists, drones, and radars.

What American armchair and TV generals simply cannot comprehend is that in Russia’s view of this war–which military expert Andrei Martyanov defines as a “combined arms and police operation”–the two top targets are the destruction of all military assets of the enemy while preserving the life of its own soldiers.

So while losing tanks is not a big deal for Moscow, losing lives is. And that accounts for those massive Russian bombings; each military target must be conclusively destroyed. Precision strikes are crucial.

There is a raging debate among Russian military experts on why the Ministry of Defense does not go for a fast strategic victory. They could have reduced Ukraine to rubble–American style–in no time. That’s not going to happen. The Russians prefer to advance slowly and surely, in a sort of steamroller pattern. They only advance after sappers have fully surveilled the terrain; after all there are mines everywhere.

The overall pattern is unmistakable, whatever the NATO spin barrage. Ukrainian losses are becoming exponential–as many as 1,500 killed or wounded each day, everyday. If there are 50,000 Ukrainians in the several Donbass cauldrons, they will be gone by the end of June.

Ukraine must have lost as many as 20,000 soldiers in and around Mariupol alone. That’s a massive military defeat, largely surpassing Debaltsevo in 2015 and previously Ilovaisk in 2014. The losses near Izyum may be even higher than in Mariupol. And now come the losses in the Severodonetsk corner.

We’re talking here about the best Ukrainian forces. It doesn’t even matter that only 70 percent of Western weapons sent by NATO ever make it to the battlefield: the major problem is that the best soldiers are going…going…gone, and won’t be replaced. Azov neo-Nazis, the 24th Brigade, the 36th Brigade, various Air Assault brigades–they all suffered losses of 60+ percent or have been completely demolished.

So the key question, as several Russian military experts have stressed, is not when Kiev will ‘lose’ as a point of no return; it is how many soldiers Moscow is prepared to lose to get to this point.

The entire Ukrainian defense is based on artillery. So the key battles ahead involve long-range artillery. There will be problems, because the U.S. is about to deliver M270 MLRS systems with precision-guided ammunition, capable of hitting targets at a distance of up to 70 kilometers or more.

Russia, though, has a counterpunch: the Hermes Small Operational-Tactical Complex, using high precision munitions, possibility of laser guidance, and a range of more than 100 kilometers. And they can work in conjunction with the already mass-produced Pantsir air defense systems.

Ukraine, within its current borders, is already a thing of the past. Georgy Muradov, permanent representative of Crimea to the President of Russia and Deputy Prime Minister of the Crimean government, is adamant:

Ukraine in the form in which it was, I think, will no longer remain. This is already the former Ukraine.

The Sea of Azov has now become a “sea of joint use” by Russia and the Donetsk People’s Republic (DPR), as confirmed by Muradov.

Mariupol will be restored. Russia has had plenty of experience in this business in both Grozny and Crimea. The Russia-Crimea land corridor is on. Four hospitals among five in Mariupol have already reopened and public transportation is back, as well as three gas stations.

The imminent loss of Severodonetsk and Lysichansk will ring serious alarm bells in Washington and Brussels, because that will represent the beginning of the end of the current regime in Kiev. And that, for all practical purposes–and beyond all the lofty rhetoric of “the west stands with you”–means heavy players won’t be exactly encouraged to bet on a sinking ship.

On the sanctions front, Moscow knows exactly what to expect, as detailed by Minister of Economic Development Maxim Reshetnikov:

On efforts to “intimidate Russia,” players would be wise to listen to the hypersonic sound of 50 Sarmat state-of-the-art missiles ready for combat this autumn, as explained by Roscosmos head Dmitry Rogozin.

This week’s meetings in Davos brings to light another alignment forming in the world’s overarching unipolar vs. multipolar battle. Russia, the baby twins, Chechnya and allies such as Belarus are now pitted against ‘Davos leaders’–in other words, the combined western elite, with a few exceptions like Hungary’s Prime Minister Viktor Orban.

Zelensky will be fine. He’s protected by British and American special forces. The family is reportedly living in an $8 million mansion in Israel. He owns a $34 million villa in Miami Beach, and another in Tuscany. Average Ukrainians were lied to, robbed, and in many cases, murdered, by the Kiev gang he presides over–oligarchs, security service (SBU) fanatics, neo-Nazis. And those Ukrainians that remain (10 million have already fled) will continue to be treated as expendable.

Meanwhile, Russian President Vladimir “the new Hitler” Putin is in absolutely no hurry to end this larger than life drama that is ruining and rotting the already decaying west to its core. Why should he? He tried everything, since 2007, on the “why can’t we get along” front. Putin was totally rejected. So now it’s time to sit back, relax, and watch the Decline of the West.