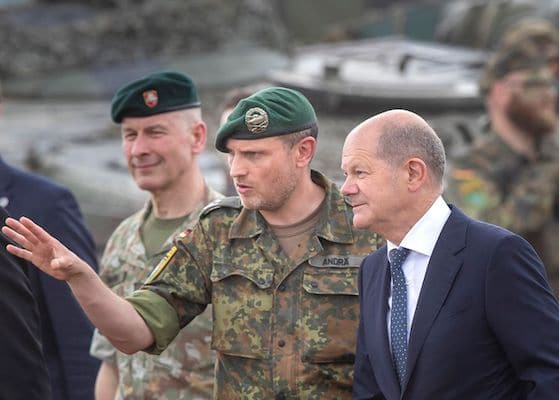 Germany is playing an increasingly aggressive role in NATO’s war offensive against Russia. During his visit to Lithuania on Tuesday, Chancellor Olaf Scholz announced Germany would increase the number of its combat troops on the ground in that country.

“We are determined that we will increase our contribution,” Scholz said at a meeting with Lithuanian President Gitanas Nauseda and the heads of government of the three Baltic states in Vilnius. The German presence was to be developed “in the direction of a robust combat brigade.”

This means a massive expansion of the German commitment. Currently, just under 1,000 Bundeswehr soldiers are stationed in Lithuania; a brigade consists of up to 5,000 soldiers. 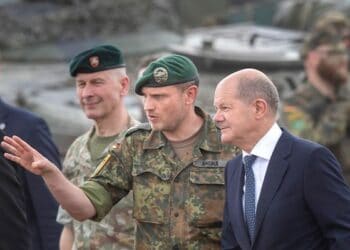 Nauseda called Russia a “terrorist state” towards which there could be “no dialogue or cooperation, no appeasement or yielding.” Instead, he said, Moscow’s “complete isolation must be sought” and “we must respond decisively to the Russian threat and strengthen our defences.”

He criticised French President Emmanuel Macron’s remark that Moscow should not be humiliated. “We will humiliate Russia in Macron’s sense, both militarily and economically,” he rumbled.

Scholz made it clear to members of the press that his telephone conversations with Russian President Vladimir Putin were aimed at forcing Moscow to capitulate. The point, he said, was to make it clear to Putin again and again that his strategy of attacking Ukraine was not working.

Scholz then boasted about Germany’s massive rearmament. He said he was “very happy to be here today because this is a day that follows shortly on the heels of the decision that the German Bundestag made last Friday.” With a “constitution-amending majority,” he said,

a special fund for the Bundeswehr has been set in motion, comprising 100 billion euros, which will make it possible to further strengthen the German armed forces, which are already very strong.

The increase in defence spending would enable Germany to “ensure that the Bundeswehr, which will then probably possess by far the largest conventional army in Europe, can guarantee its task of organising and ensuring common defence within the framework of NATO.” As allies in NATO, we “feel obliged to each other, and we will defend every inch of NATO territory in the event of an attack.”

Germany would continue to supply Kiev with weapons until Russia was defeated, Scholz declared. “We will continue to support Ukraine with arms deliveries.” Germany was “doing this more intensively than almost anyone else and will continue its support in the near future as long as it is necessary to be able to repel Russian aggression.”

This now apparently also involves battle tanks made in Germany. In the case of a Spanish application for an export licence for Leopard infantry fighting vehicles to Ukraine, his government would “carefully examine” it, Scholz assured. At the weekend, the Spanish newspaper El País reported that Madrid was planning to supply Kiev with German Leopard 2 A4 main battle tanks and air defence missiles. The German government would have to approve their export.

Only last week, Scholz had held out the prospect of another round of massive arms deliveries as part of the adoption of the “Bundeswehr Special Fund.” Among other things, he promised the delivery of a modern Iris-T air defence system and a tracking radar.

According to Scholz, the decision was made in coordination with the US, which is also supplying Ukraine with modern missile systems that can also reach targets in Russia itself. Thus the war, which was deliberately provoked by NATO, is developing ever more directly in the direction of an open conflict between nuclear powers.

The massive war offensive refutes the official propaganda of a supposedly defensive approach “against Russian aggression,” as claimed by Scholz in Vilnius.

Indeed, since the dissolution of the Soviet Union 30 years ago, the NATO powers have been tightening the noose around Russia. In Ukraine, Washington and Berlin orchestrated a coup in early 2014 in cooperation with fascist forces like Svoboda and Right Sector to bring a pro-Western regime to power in Kiev. Subsequently, the imperialist powers have continued to fuel the conflict. 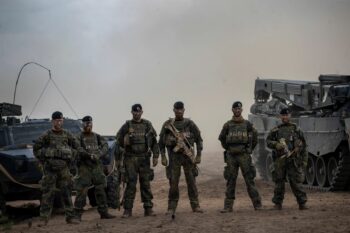 The German-led “battlegroup” in Lithuania, which is now to be massively enlarged, was established in 2017, along with other “battlegroups” in Estonia, Latvia and Poland. It is already armed to the teeth. “The battlegroup is equipped with a sizable number of large vehicles, including several dozen tanks (combat, recovery, engineer, bridge-laying and infantry fighting vehicles),” reads a brochure published by the Bundeswehr Operations Command.

As part of his trip, Scholz visited German combat forces at the military training area in Prabade. According to an official report on the government website, he thanked the soldiers there “for their work, on behalf of the entire federal government.”

The martial display of German imperialism in Eastern Europe and the mobilisation of German combat units for war against Russia are part of a decidedly fascist tradition. 81 years ago, Hitler’s army, the Wehrmacht, invaded the Soviet Union and waged a war of extermination throughout Eastern Europe, killing at least 27 million people—including 6 million Jews in the Holocaust.

Despite these monstrous crimes, the imperialist powers are once again pursuing the goal of dismembering Russia and plundering its huge reserves of raw materials. In doing so, they rely on fascist forces and traditions, not only in Ukraine.

In Lithuania, the German-led “battlegroup,” which itself has repeatedly attracted attention for its neo-Nazi activities, is under the “Iron Wolf” brigade of the Lithuanian armed forces. Originally, the Iron Wolf (Geležinis vilkas) was a fascist fighting alliance founded in 1927 under the dictator Antanas Smetona. During the Second World War, members of the Iron Wolf collaborated with the Nazi occupiers and were involved in massacres of the Jewish population in Lithuania.