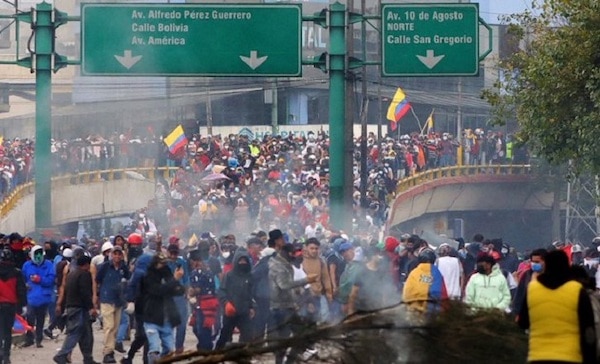 On Tuesday, the Confederation of Indigenous Nationalities of the Ecuadorian Amazon (CONFENAIE) denounced the death of an Indigenous protester as a result of police brutality in the city of Puyo, in the province of Pastaza.

“The hands of the National Police and the Guillermo Lasso administration are stained with the blood of our brother who was vilely murdered with a shot at close range,” the CONFENIAE said and released images in which Byron Guatatuca can be seen dying on the ground. .

The Confederation of Indigenous Nationalities of Ecuador (CONAIE) denounced that the repression has increased since President Lasso decreed the State of Exception to try to end the national strike, which has already completed 9 consecutive days.

“It is worrying how military and police violence has escalated against those who exercise their right to protest and resist,” the Alliance of Ecuadorian Human Rights Organizations said and released videos showing violence used by the police and the army against civilians.

The tweet reads, “Ecuador has had eight consecutive days of Indigenous protests. Fertilizer shortages, rising prices of agricultural raw materials, and the cost of transportation have impoverished families. Protesters are shouting that the Lasso government must fall.”

Unlike previous days, the protests intensified in Guayaquil, a coastal city traditionally controlled by right-wing parties that does not usually mobilize in support of Indigenous organizations. Thousands of people took to the streets and highways to demand the departure of President Lasso. In other provincial capitals the scenes were similar.

In the Ecuadorian Amazon, where there is a large concentration of the indigenous population, the protests became violent due to the outrage of citizens over the death of Guatatoca. The crowd tried to burn down some branches of the Bank of Guayaquil, which is owned by President Lasso.

Given the increase in repression, the CONAIE President Leonidas Iza conditioned the dialogue with the Ecuadorian government to the repeal of the state of emergency in force in 6 out of 24 provinces of the country.

“The government’s response to the protests has only managed to exacerbate the spirits of the population and generate a serious escalation of violence,” he said.

The national strike called by CONAIE will continue until the Lasso administration grants guarantees so that social organizations can start a dialogue process. Among the causes of the strike are citizen demands for the high cost of living, budget cuts in education and health, insecurity, illegal mining, and unemployment.

Ecuador's Ministry of Defense asserted that indigenous protests seek to "create panic with aggressions against companies". At the same time, indigenous protesters denounced the response of the police army corps with brutal repression that left at least one dead. #Ecuador pic.twitter.com/UdEcPqntLZ