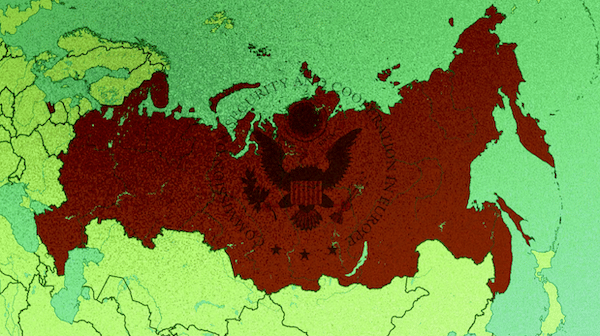 A U.S. government body held a Congressional briefing plotting ways to break up Russia as a country, in the name of supposed “decolonization.”

The participants urged the United States to give more support to separatist movements inside Russia and in the diaspora.

They proposed the independence of numerous republics in the Russian Federation, including Chechnya, Tatarstan, and Dagestan, as well as historic areas that existed centuries ago such as Circassia.

This is far from the first time that hawks in Washington have fantasized about carving up foreign countries. During the first cold war, the U.S. sponsored secessionist groups inside the Soviet Union. In the 1990s, the U.S.-led NATO military cartel successfully dismantled Yugoslavia. And Washington has long backed separatists in the Chinese regions of Tibet, Xinjiang, Hong Kong, and Taiwan.

After the overthrow of the USSR, neoconservative operative and future Vice President Dick Cheney wanted to slice up Russia into several smaller countries. Former U.S. National Security Advisor Zbigniew Brzezinski even published an article in elite Foreign Affairs magazine in 1997 proposing to create a “loosely confederated Russia–composed of a European Russia, a Siberian Republic, and a Far Eastern Republic.”

Yet this Congressional hearing was one of the most high-profile and provocative calls for balkanization yet, held in broad daylight.

Titled “Decolonizing Russia: A Moral and Strategic Imperative,” the June 23 briefing was organized by the U.S. Commission on Security and Cooperation in Europe (CSCE), known more commonly as the Helsinki Commission.

This commission claims to be “independent,” but it is a U.S. government agency created and overseen by Congress.

The event was introduced by Congressman Steve Cohen, a Democrat from Tennessee who co-chairs the commission.

Representative Cohen claimed Russians “have in essence colonized their own country,” and argued that Russia is “not a strict nation, in the sense that we’ve known in the past.”

At the virtual hearing, which was livestreamed on YouTube, the congressman was joined by veteran regime-change activists who have worked for an array of U.S. government agencies.

The event was moderated by Bakhti Nishanov, a senior policy advisor to the Commission on Security and Cooperation in Europe.

He excitedly noted, “We have many, many participants. I think this is pretty much a record for a House commission briefing.”

Nishanov argued that Western condemnation of Moscow’s war in Ukraine should expand to opposition to “Russia’s interior empire.”

He added that the panelists hoped to “come up with ideas that will actually contain Russia.”

The most active speaker in the hearing was Casey Michel, a millennial neoconservative activist who has made a career out of advocating for regime change against the U.S. government’s adversaries.

Michel got his start professionally working for the U.S. Peace Corps on the Russia-Kazakhstan border, and later capitalized on the new cold war hysteria in Washington.

He is an adjunct fellow at the ironically named Kleptocracy Initiative of the Hudson Institute, a right-wing DC think tank that has been handsomely funded by the Koch oligarchs, WalMart’s Walton family, massive corporations like ExxonMobil, and the Pentagon.

In May, Michel published an article in Washington’s establishment magazine The Atlantic, titled “Decolonize Russia,” which appears to have been an inspiration for the Congressional briefing.

The neoconservative activist lamented that the United States did not use the fall of the Soviet Union in 1991 to break up Russia itself. He complained that Western support for secessionist movements in Russia did not go far enough.

“These are colonized nations that we consider to be part of Russia proper, even though, again, these are non-Russian nations themselves that remain colonized by, as we’ve seen yet again, another dictatorship in the Kremlin,” Michel said.

He insisted that the event was not simply about advocating for the “dismemberment and partition” of Russia, but was rather motivated by genuine opposition to colonialism and imperialism.

This was deeply ironic, because Michel has spent years viciously smearing the anti-imperialist left in the United States, while frequently caricaturing the term to demonize the governments of Cuba, Venezuela, Nicaragua, and Bolivia.

When it comes to supporting separatist movements inside Russia, however, Michel curiously fashions himself one of the world’s most vocal advocates of a unique form of “anti-imperialism” that just so happens to advance U.S. foreign policy interests.

.@cjcmichel: choosing to ignore the kinds of anti-colonial, pro-sovereignty, and anti-imperial movements that will emerge in Russia is a luxury we no longer have. https://t.co/RQA2bR4pd9

Joining Michel at the Congressional briefing was Erica Marat, a professor at the College of International Security Affairs at the Pentagon’s National Defense University.

Marat accused Russia of committing “genocide.” She condemned so-called “imperial collaborators” in Russia, singling out Chechen leader Ramzan Kadyrov. She did not acknowledge the incongruity that she herself works for the U.S. Department of Defense.

Marat also complained that the “Global South continues to consider Russia as an anti-Western, anti-colonial power and denies the dignity of non-Russian people and especially people of color from the former Soviet states.”

Similar comments were made by fellow panelist Botakoz Kassymbekova, a lecturer at Switzerland’s University of Basel.

Kassymbekova lamented that the Soviet Union’s anti-imperialist “narrative was very attractive, especially in the Global South.”

She rejected “the Marxian idea, that was popular all around the world, that capitalism produces colonialism,” and the “very successful anti-Western narrative of the Soviet Union that colonialism is a Western problem.”

Kassymbekova insisted that the USSR was colonialist, although her argument was contradictory because she simultaneously admitted that, after the Bolshevik Revolution, the former Russian czarist empire “partially underwent decolonization.”

Ironically, she also repeatedly mentioned “Stalinism” and the need for thorough “de-Stalinization,” without ever acknowledging that Joseph Stalin was himself Georgian, not Russian.

Kassymbekova used the briefing to call for the U.S. government to provide more resources for secessionist movements by “supporting civic initiatives and civil societies of its neighbors and within Russia.”

.@BotakozKassymb1: Today Russia attempts to restore the Soviet empire based on the idea of Russian cultural superiority and genocidal suppression of peoples. https://t.co/RQA2bR4pd9

Another panelist was Fatima Tlis, a Circassian separatist activist from Russia who was given a fellowship by the National Endowment for Democracy (NED), a notorious CIA cutout used to finance U.S. regime-change operations around the globe.

Tlis has worked extensively with U.S. government propaganda outlets Voice of America and Radio Free Europe/Radio Liberty. According to her publicly available LinkedIn profile, Tlis has also worked with the Jamestown Foundation, a neoconservative DC think tank closely linked to the CIA.

Tlis claimed in the hearing that her “homeland” Circassia is “occupied” by Russia. She also spoke of “white slavery.”

In the Q&A session, a guest asked how the panelists could discuss “decolonization” in Russia while they are in the United States and work for the U.S. government, which was founded on genocide of Indigenous peoples. Tlis dismissively shot back, “As for your question, everybody who has ever dealt with the Russian disinformation and propaganda would immediately recognize it for what it is. It’s called–there’s actually a professional term for this disinformation: whataboutism.”

Kassymbekova responded similarly, arguing “this is kind of a very typical way of blaming the West rather than looking inwards.”

The final participant in the briefing was Hanna Hopko, a former of member of Ukraine’s parliament, who previously chaired its Foreign Affairs Committee, and a significant figure in the 2014 U.S.-sponsored coup in Ukraine, marketed as Euromaidan.

Hopko insisted that Washington must think “how to change not just the regime, but how to change the imperialistic nature of Russian statehood.”

But because she was traveling, Hopko’s call signal was very weak, and she was not able to speak much in the briefing.

The panelists concluded the hearing condemning Russia’s military intervention in Syria, while making no mention of the billions of dollars the United States, its European allies, Gulf monarchies, Israel, and NATO member Turkey spent arming and training sectarian Islamist rebels in order to wage a proxy war in the country.

They likewise failed to acknowledge that Russia only entered Syria at the request of the country’s internationally recognized government. Tlis referred to Syrian President Bashar al-Assad as an illegitimate Russian “asset,” and depicted Moscow’s defense of Syria’s territorial integrity against Western attempts at state collapse as a form of aggression.

Intersectional imperialism
This “Decolonizing Russia” briefing is one of a growing number of examples of the U.S. government co-opting left-wing rhetoric in order to advance its imperial interests.

Numerous Biden administration officials have exploited rhetoric about “intersectionality,” the principle that various forms of oppression like racism and sexism intersect.

The CIA published a recruitment ad featuring a Latina agent who proudly called herself a feminist. The spy agency–which is notorious for organizing right-wing coups d’etat and torturing detainees–has likewise portrayed itself as a supporter of the trans community.

The U.S. government funds a podcast co-created and hosted by a CIA veteran that claims to speak on behalf of the “Uyghur diaspora” and employs intersectional feminist rhetoric to demonize China.

This strategy of intersectional imperialism shows how Washington has modified its propaganda strategy, employing progressive-sounding talking points to appeal to left-leaning youth.

DC’s call to “decolonize” Russia is reminiscent of an award-winning paper by academic Cara Daggett, titled “Drone Disorientations: How ‘Unmanned’ Weapons Queer the Experience of Killing in War.” This article whitewashed the U.S. assassination program by arguing it is subversive and anti-heteronormative, because “Killing with drones produces queer moments of disorientation.”