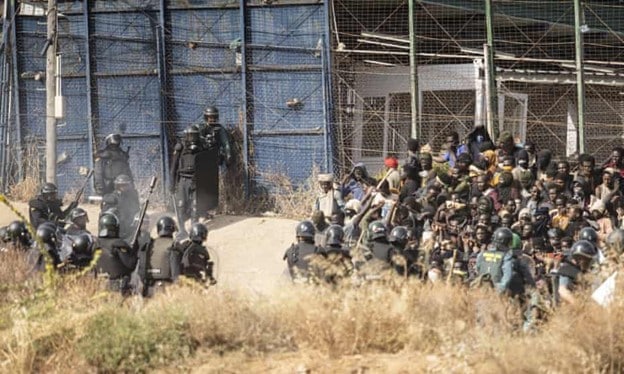 Video images captured the horrific actions of Moroccan security forces armed and trained by the United States through the U.S. Africa Command (AFRICOM) and working on behalf of the Spanish government, systematically beating and slaughtering African migrants on June 24, 2022. The migrants’ only crime was attempting to cross from Morocco to Europe via the Spanish held enclave of Melilla. For that, at least 39 human beings were beaten to death, as recorded by the NGO Walking Borders. This racist barbarism by a U.S.-backed neo-colonial regime and the lack of swift and unambiguous condemnation by the U.S. State demonstrates, yet again, that human life, especially African lives hold no value for U.S. officials.

The Black Alliance for Peace (BAP) denounces first, the Moroccan government’s security forces and the Spanish government for their collaboration in this massacre and their ongoing dehumanizing treatment of African asylum seekers. We must note that, as the Moroccan police were beating and hog-tying the African migrants, AFRICOM was carrying out “Operation African Lion” – military exercises in Morocco with more than 7,500 troops from Western nations and African neo-colonies. Soon after, NATO nations (the coterie of U.S. minions) held their meeting in Spain, with no acknowledgement of the massacre.

We especially condemn the United States government for its unmitigated hypocrisy in claiming that its presence and policies in Africa are to “promote regional security, stability, and prosperity.” The only securing and stabilizing AFRICOM and U.S. policy are doing in Africa are for the prosperity of international finance capital and hegemony of U.S. interests. We know that U.S. militarism – which guarantees European imperialism on the African continent, while giving cover to the repressive actions of neo-colonial states such as Morocco – will continue to be the main cause of escalating violence for the African people.

“All evidence suggests that U.S. militarism and training of police, and other repressive forces in Africa has only intensified death and destruction;” says Netfa Freeman, Co-Coordinator of BAP’s Africa Team.

BAP extends solidarity to all the African migrants and their families, victims of the brutal racist attack. We also demand a full independent investigation and indictment of the actions of Morocco, Spain, and the U.S. And we demand, once again, that the U.S. get out of Africa and that NATO and AFRICOM be shut down!

The Black Alliance for Peace calls on all anti-imperialists to join the U.S. Out of Africa Network to help us achieve this imperative.

No Compromise! No Retreat!