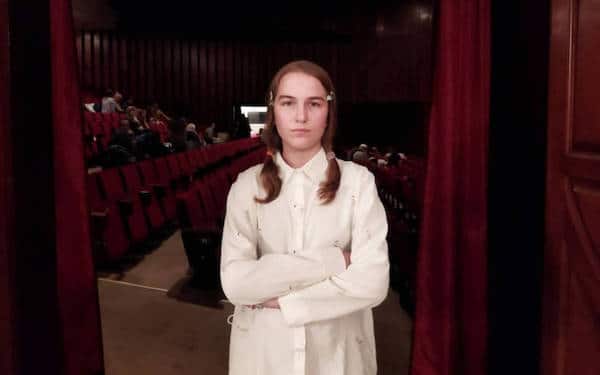 If you ask most teenagers in the United States or Europe what they like to do, they’ll probably tell you they enjoy playing video games like “Call of Duty,” where they pretend to be at war. For them, war is a game. An entertaining way to spend their time after school or on weekends. For 13-year-old Faina Savenkova, war is no game, but a terrifying daily reality she has faced for eight long years. Two weeks ago, I first wrote about Faina, the child-writer from eastern Ukraine. She has been surrounded by war since she was just five years old. She first began writing about it when she was ten, as a way to cope with the daily fear of bombardment. And she hopes that her writing will bring attention to the plight of other children in the war-torn region of Donbas where she lives.

In the west, most people seem to believe that the war in Ukraine began in February, 2022, when Russian forces first crossed the border. And mainstream media makes the war sound simplistic and two-dimensional, like a comic book, with “bad guys” and “good guys.” As though Russians are Orcs from Mordor, and President Vladimir Putin is an evil madman who invaded Ukraine for no reason other than his seething hatred for humanity and his desire for world domination.

As they say, truth is the first casualty of war.

In reality, many of the people living in eastern Ukraine begged Putin to intervene for years before he finally relented. And during those years, the people of Donbas lived in their basements as Ukrainian nationalists, who idealize mass-murderers like Stepan Bandera and Roman Shukhevich, bombed their homes, churches, schools, markets and other civilian places. The Russian-speaking residents of eastern Ukraine have been under attack by Ukrainian forces, backed by the U.S. and NATO, ever since the Maidan coup which ripped Ukraine asunder in 2014. Just last week, Russian forces finally secured the entire region of Lugansk, wresting it out of Ukrainian control. But the war rages on in Donetsk and in other parts of eastern Ukraine, and civilians continue to die, many of them children.

Faina wants Americans to know what she and other children in the breakaway People’s Republics of Lugansk and Donetsk have been going through all this time. I talked with her via text on VKontakte, a Russian social media site where we have become acquainted. I also invited her to write an open letter to the American people, which I will include in this article.
Here is our conversation, translated from Russian.

Deborah Armstrong: How old were you when the war started, and what are your first memories of the war?

Faina Savenkova: When the war began, I was five years old. My first memories are of the frightening rumbling, the dark basement, dogs and cats which were abandoned, roaming the yards and streets. At that age, you perceive everything differently. You don’t have the sense of fear that adults have. It’s probably because you don’t understand that you could die. So, you just sit there, counting the explosions, studying a spider that weaves its web in the corner of the damp basement, praying that it will end quickly.

DA: How has the war changed your life?

FS: I became more focused. After all, to live in a war is to know all the time that you could be killed. A missile or a shell could come, even if you live on the outskirts of town. I was once asked what the difference is between children living in war and children from Europe or the United States. My answer was that we are not much different, except that we are in a hurry to live, not putting things off until tomorrow. Because that “tomorrow” may not come for us.

DA: How has the war changed your family’s lives? Your friends’ lives?

FS: My parents did not leave either in 2014 or in 2022. Of course, the war impacted all of our lives, but it has become sort of a daily routine that we have gotten used to, so it’s hard to say right away how it affected us. Some of my former classmates had relatives killed because of the war, so their lives changed much more than mine.

DA: Americans don’t believe that there are Nazis in Ukraine. What would you say to them?

FS: Unfortunately, in America not many people know much about what happened in our country. Even the fact that we have had a war going on. Americans only learned about it in 2022, when the Russian operation in Ukraine began. The American media said that evil Putin attacked poor Ukraine. Of course, many believed it. True, the media forgot to mention that Ukraine has been killing civilians in Donbas for eight years. I don’t know what Nazism means to Americans. To me, it’s lack of freedom, prohibition to speak your mind, the worship of Bandera and Hitler, the shelling of peaceful cities, the killing of children. That’s Nazism. But I would probably suggest that these people come to Donetsk and Makeyevka and live there under the bombardment.

DA: How do you feel about the U.S. and NATO “defending” Ukraine?

FS: I don’t think that they are defending Ukraine. Handing them weapons is not helping them, because Ukrainian soldiers are dying. Not American or NATO soldiers. So, this isn’t supporting them, it’s sending an entire nation to its death.

DA: What do you think about Russia’s “special military operation”?

FS: When I signed a letter from 100 fiction writers in support of Russia’s special operation in Ukraine, many people condemned me. Both then and now, I have no doubts about the rightness of this decision. Ukraine is killing children and women. They shoot at kindergartens, schools and homes, and people are dying because of it. And the only country that can save us is Russia. Of course, Russia might not have sent its army to help Donbas, because Russian soldiers are also dying. But thanks to the army, I can live more-or-less peacefully in Lugansk and I already fear less for my life.

DA: How do you feel about your country, the Lugansk People’s Republic, gaining independence?

FS: To me, it’s something which has already happened.

FS: I know that the United States celebrates Independence Day on the Fourth of July. Britain, too, was once unhappy, calling Americans “separatists.” I don’t think that a big state likes it when some region wants to live on its own, but it doesn’t happen that simply. Things like this happen when politicians can’t agree. Donbas and Crimea only wanted their rights respected, our heroes honored, and for the Russian language not to be banned. We also wanted good relations with Russia. But no one listened to us. And anyway, I don’t consider myself a “separatist.”

DA: Faina also wants to draw attention again to the Ukrainian website Mirotvorets, which has published a database of thousands of names, including hers, along with personal information like home addresses. The people listed, mostly journalists, activists and writers like herself, are deemed to be “enemies of Ukraine.” At least one journalist on this list has been killed, and after his death, the Ukrainian word for “liquidated” was put over his photograph in red letters.Despite demands from international human rights organizations, Mirotvorets, which ironically means “Peacemaker,” continues to operate. You can visit the site, but be prepared to see graphic images of violence. The website’s home page is covered with photographs of dead Russian soldiers, and that is only the beginning of the horror. And yet the website remains. This is what Faina had to say about it:

FS: I wrote a video appeal to the UN last year, about how children shouldn’t die [in war]. In October, this website posted my contact information and home address, violating international laws on personal data. Now my data is on the Internet. This is a danger to my life, because in addition to nationalists, there are human traffickers and just murderers. My case caused a scandal and reached the UN Secretary General and UNICEF but unfortunately, all they did was express concern, and the danger to my life remains. Nevertheless, I will continue to fight this site, because it’s not just me, but many other children as well. It’s difficult for me to explain to Americans what Mirotvorets is. This site posts the data of those who disagree with the authorities of Ukraine under the pretext that these people are “enemies of Ukraine.” By comparison, imagine if the Ku Klux Klan opened such a website in the U.S., with a server located in Russia, and listed politicians, actors, musicians, public figures and anyone who expresses a different opinion and posted their addresses and bank accounts and openly called for reprisals against them? Of course, I fear for my life, but I will do everything I can to have this site shut down and the organizers brought before an international court. European journalists and the Russian Foundation for Battling Injustice and Mira Terada [the foundation’s spokesperson], are helping me. I hope that everything will work out for us.

DA: What is the main thing you wish Americans knew about this war?

FS: I would like Americans to know the truth. When they tell you that some [people] are bad and others are good, it’s not the truth, it’s propaganda.

To my friends in America

Two events recently took place in the world. In America, in the suburbs of Chicago, people were killed during Independence Day celebrations. And in the last three days, artillery fire from Ukraine in Donbas, in Donetsk and Makeyevka, killed five children. A 10-year-old girl was torn apart by a Ukrainian shell. But did American journalists notice this? No.

I can understand why Americas mourn the dead on Independence Day. But they stubbornly refuse to see what Ukraine is doing. I live in Donbas, and after children were killed by the weapons you and Europe supply, I should probably hate you and be rejoice that God punishes those who cause the death of our children. But I am Russian and I have been living in a war for eight years now. I understand what death is, so I do not feel anger and hatred. And I grieve with you for those who died. Human life is priceless, and murder is always terrible because you cannot bring back those who are lost, you cannot dull this pain. Just as you cannot shut out the war, because the war, which your government is as much to blame for as anyone else, is bound to come back to you.

I’m sorry that many in America don’t know that it all started eight years ago. And Ukraine is killing civilians, destroying our cities, killing children. But your politicians hardly pay attention to this. They are ready to fight to the last Ukrainian and, apparently, they think they will defeat Russia in a nuclear war. They won’t. I would like you to understand that war is bad, just like killing innocent people is. I hope this will soon be over, and that humanity will once again understand the value of life and a peaceful future, and that Russia and America will be friends.