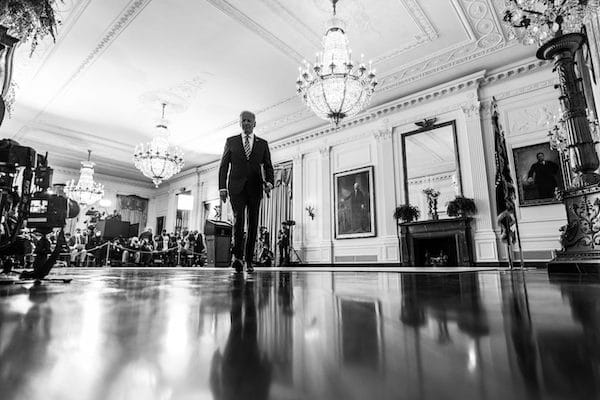 What were the policy cliques, “the intelligence community” and the press that serves both going to do when the kind of war in Ukraine they talked incessantly about turned out to be imaginary, a Marvel Comics of a conflict with little grounding in reality? I have wondered about this since the Russian intervention began on Feb. 24. I knew the answer would be interesting when finally we had one.

Now we have one. Taking the government-supervised New York Times as a guide, the result is a variant of what we saw as the Russiagate fiasco came unglued: Those who manufacture orthodoxies as well as consent are slithering out the side door.

I could tell you I don’t intend to single out the Times in this wild chicanery, except that I do. The once-but-no-longer newspaper of record continues to be singularly wicked in its deceits and deceptions as it imposes the official but imaginary version of the war on unsuspecting readers.

As Consortium News’s properly suspecting readers will recall, Vladimir Putin was clear when he told the world Russia’s intentions as it began its intervention. These were two: Russian forces went into Ukraine to “demilitarize and de–Nazify” it, a pair of limited, defined objectives.

An astute reader of these commentaries pointed out in a recent comment thread that the Russian president had once again proven, whatever else one may think of him, a focused statesman with an excellent grasp of history. At the Potsdam Conference in July 1945, the Allied Control Council declared its postwar purpose in Germany as “the four D’s.”  These were de–Nazification, demilitarization, democratization and decentralization.

Let’s give David Thompson, who brought this historical reference to my attention, a deserved byline here:

Putin’s reiteration of the de–Nazification and demilitarization principles established from the Potsdam Conference is not just some quaint tip of the hat to history. He was laying down a marker to the United States and the United Kingdom that the agreement reached at Potsdam in 1945 is still relevant and valid …. 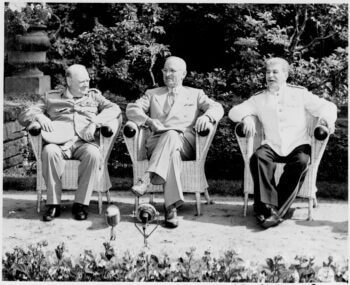 The Russian president, whose entire argument with the West is that a just and stable order in Europe must serve the security interests of all sides, was simply restating objectives the trans–Atlantic alliance had once signed on to accomplish. In other words, he was pointing out said alliance’s gross hypocrisy as it arms the ideological descendants of German Nazis.

I dwell on this matter because the imaginary war began with the Biden regime’s and the press’s quite irresponsible misrepresentations of the Russian Federation’s aims in Ukraine. All else has flowed from it.

You remember: Russian forces were going to “conquer” the whole of the nation, wipe out the Kiev regime, install a puppet government and then drive on to Poland, the Baltic states, Transnistria and the rest of Moldova, and who could imagine what after that. De–Nazification, we can now read, is a phony Kremlin dodge.

Having lied outright on this score, the next edition of the comic went onto the market. Russia is failing to achieve its imaginary objectives. Low morale, desertions, poorly trained troops with not enough to eat, logistical failures, lousy artillery, inadequate ordnance, incompetent officers: The Russians were riding for a fall on Ukrainian soil.

The corollary here was the heroism, courage and battlefield grit of Ukrainian troops, least of all, the Azov Battalion, who were not any longer neo–Nazis.  Never mind the Times, The Guardian, the BBC and various other mainstream publications and broadcasters had earlier told us about these ideological fanatics. That was then, this is now.

The problem at this point was there were no battlefield successes to report. The defeats, indeed, had begun. In May, roughly when the Azov Battalion, heroic and democratic as it is, was forced to surrender in Mariupol, it was time for–this just had to be–Russian atrocities.

We had the theater and the maternity hospital in Mariupol, we had the infamous slaughter in Bucha, the Kiev suburb; various others have followed. Just what happened in these cases has never been established by credible, disinterested investigators; plentiful evidence that Ukrainian forces bear responsibility is dismissed out of hand. But who needs investigations and evidence when the brutal, criminal, indiscriminately ruthless Rrrrusssians, must be culpable if the imaginary war is to proceed?

My unchallenged favorites in this line come courtesy of CNN, which went long this spring on allegations–Ukrainian allegations, of course–that Russian soldiers were raping young girls and young boys right down to months-old infants. Three such specimens are here, here and here.

The network abruptly dropped this line of inquiry after the senior Ukrainian official disseminating these allegations was removed from office because the charges are fabrications. A wise move on CNN’s part, I think: Propaganda does not have to be very subtle, as history shows, but it does have its limits.

Just after the atrocities narrative had ripened, the Russians-are-stealing-Ukrainian-grain theme began. The BBC offered an especially wonderful account of this. Look at this video and text presentation and tell me it isn’t the cutest thing you’ve ever seen, as many holes in it as my Irish grandma’s lace curtains.

But at this point, problems. Russian forces, with their desertions, antiquated guns, and dumb generals, were taking one city after another in eastern Ukraine. These were not–the fly in the ointment–imaginary victories. 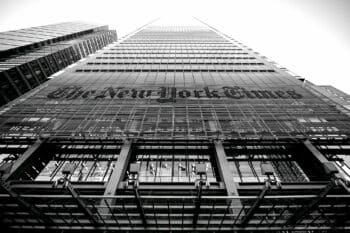 Out with the war-is-going-well theme and in with the brutal Russians’ indiscriminate use of artillery. This was a “primitive strategy,” the Times wanted us to know. In the awfulness of war, you simply don’t shell an enemy position as a preliminary to taking it. Medieval.

Lately, there’s another problem for the conjurors of imaginary war. This is the death toll. The U.N. Human Rights Monitoring Mission reported May 10 that the casualty count to date was in excess of 3,380 civilian fatalities, bumped up in June to 4,509, and 3,680 civilians injured. (And both sides shoot and kill in a war.)

Goddamn it, they exclaimed on Eighth Avenue.  That is nowhere near enough in the imaginary war. Desperate for a gruesomely high death toll, the Times, on June 18, published “Death in Ukraine: A Special Report.” What a read. There is nothing in it other than innuendo and weightless surmise. But the imaginary war must grind on.

The Times’s “special report”— dum-da-da-dum–rests on phrases such as “witness testimony and other evidence” and “the thousands believed killed.” The evidence, to be noted, derives almost entirely from Ukrainian officials–as does an inordinate amount of what the Times publishes.

There is a great quotation:  “People are killed indiscriminately or suddenly or without rhyme or reason.” Wow. Is this damning or what?

But another problem. This observation comes from one Richard Kohn, who is emeritus at the University of North Carolina. I hope the professor is having a good summer down in Chapel Hill.

In late June, Sievierodonetsk fell–or rose, depending on your point of view–and in short order so did Lysychansk and the whole of Luhansk province. Now come the ’fessing up stories, here and there. The Ukrainian forces are so discombobulated they are shooting one another, we read. They can’t operate their radios and–an artful back flip here–they are running out of food and ammunition and morale. Untrained soldiers who signed up to patrol their neighborhoods are deserting the front lines. 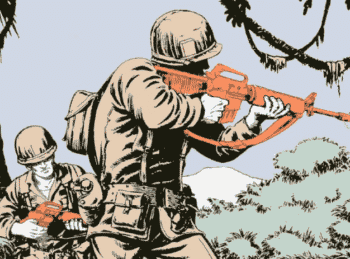 There are the holdouts. The Times reported last week that the Ukrainians, done for in Luhansk, are planning a counteroffensive in the south to reclaim lost territory. We all need our dreams, I suppose.

To the surprise of many, Patrick Lang, the ordinarily astute observer of military matters, published “Unable to even fix its own tanks, Russia’s humiliation is now complete” on his Turcopolier last Friday. The retired colonel predicts the Russians are in for “a sudden reversal of fortunes.” No, I’m not holding my breath.

Have you had enough of the imaginary war? I have. I read this junk daily as a professional obligation. Some of it I find amusing, but in the main it sickens when I think of what the American press has done to itself and to its readers.

For the record, it is hard to tell exactly what occurs on Ukraine’s tragic fields of war. As noted previously in this space, we have very little coverage from professional, properly disinterested correspondents. But I offer here my surmise, and it is nothing more.

This war has proceeded, more or less inexorably, in one direction: In the real war, the Ukrainians have been on a slow march to defeat from the first. They are too corrupt, too mesmerized by their fanatical Russophobia to organize an effective force or even to see straight.

This is not a grinding war of attrition, as we are supposed to think. It has proceeded slowly because Russian forces appear to be taking care to limit casualties–their own and among Ukrainian civilians. I put more faith in the U.N.’s numbers than in that silly, nothing-in-it “special report” the Times just published.

I do not know why Russian forces approached the outskirts of Kiev from the north early in the conflict and then withdrew, but there is no indication they intended to take the capital. There were battles, but they were certainly not “beaten back.” That is sheer nonsense.

I await proper investigations–admittedly unlikely–of the atrocities that have certainly occurred but without, so far, any conclusive indication of culpability.

Avril Haines, the director of national intelligence, remarked recently Russia’s objective remains to take most of Ukraine. In a speech at the end of June in Ashgabat, the Turkmenistan capital, Putin appeared notably at ease and asserted, “Everything is going according to plan. Nothing has changed.” The objective, he said, remained “to liberate Donbass, to protect these people, and to create conditions that would guarantee the safety of Russia itself. That’s it.”

Putting these two statements side by side, there is vastly more evidence supporting Putin’s than there is for Haines.

Intentionally or otherwise–and I often have the impression the Times does not grasp the implications of what it publishes–the paper put out a story Sunday headlined, “Ukraine and the Contest of Global Stamina.” The outcome of this conflict, it reported, now depends on “whether the United States and its allies can maintain their military, political and financial commitments to holding off Russia.”

Can they possibly not understand down on Eighth Avenue that they have just described Ukraine as a basket-case client? Do they know they have just announced that the imaginary war they have waged these past four and some months is ending in defeat, given there is no one in Ukraine to win it?