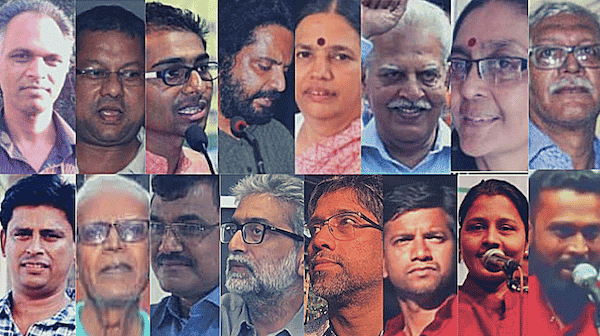 The 16 arrested in connection with the Elgar Parishad case. One of them, Father Stan Swamy, passed away in custody. (Photo: The Wire.)

It has been a year since The Wire, along with 16 other international media organisations–all part of the Pegasus Project–reported how at least eight activists, lawyers and academics arrested for their supposed role in the Elgar Parishad case were on the leaked database as probable Pegasus targets. Besides the accused persons, their family members, lawyers, associated activists and, in some cases, minor children too appeared on the list.

The Wire’s investigation meticulously laid out the chronology of the appearance of the names in the list, and the probable time their phone numbers were selected for surveillance by a client of Israel’s NSO Group. Among the first names to be added on the list–as early as in mid-2017–were Hany Babu Musaliyarveettil Tharayil, an associate professor from Delhi University (DU), and Rona Wilson, a prisoners’ rights activist. Wilson was arrested within a year; Hany Babu in 2020. Other names–rights activist Vernon Gonsalves, academic and civil liberties activist Anand Teltumbde, retired professor Shoma Sen (her number was first selected in 2017), journalist and rights activist Gautam Navlakha, lawyer Arun Ferreira, and academic and activist Sudha Bharadwaj–too showed up on the list of probable targets.

The Pegasus Project gave consolidated evidence pertaining to at least nine numbers belonging to eight rights activists arrested in the Elgar Parishad case, raising serious doubts over how some of the finest grassroots-level activists, human rights lawyers and academics were made to languish in jail for over four years. Amnesty International’s technical assistance was roped in to find traces of Pegasus on several phones. But those belonging to the accused in the Elgar Parishad case could not be checked as the phones were in the custody of the National Investigation Agency (NIA), which is handling the case.

Months later in December, however, in a first breakthrough, a Massachusetts-based digital forensics firm, Arsenal Consulting, concluded that Wilson’s phone, an Apple make, was not just selected for surveillance by a client of Israel’s NSO Group but was also successfully compromised on many occasions. Arsenal Consulting, which was engaged by Wilson’s defence lawyers to study the electronic evidence submitted against him in the Elgar Parishad case, says it has found Pegasus indicators on the Windows volume of Wilson’s computer in two iTunes backups from an iPhone 6S.

The judiciary, however, didn’t take any note of these findings.

In the Elgar Parishad case, first investigated by the local Pune police for three years and later handed over to the NIA, 16 persons were arrested. The investigating agency claimed that the accused persons were a part of the “Urban Naxal” group and among several allegations were trying to assassinate Prime Minister Narendra Modi. Since the arrest, the police’s version has changed from time to time, raising serious doubts about the veracity of the allegations made.

Of them, 84-year-old Jharkhand-based tribal rights activist and Jesuit priest Father Stan Swamy, who was arrested in October 2020, died on July 5, 2021 at a hospital in Mumbai, awaiting bail on medical grounds. Another accused person, Varavara Roa, an 83-year-old poet and activist, has been let out on medical bail. Activist and lawyer Sudha Bharadwaj was granted default bail at the end of 2021. Others continue to be lodged in Mumbai’s prison and have been denied bail on multiple occasions.

The Pegasus Project is not the only one that has found patterns of manipulation, surveillance and chances of evidence planting in the case. In February 2021, Arsenal Consulting had found that “a cyber attacker had allegedly gained access to Wilson’s laptop and planted at least 10 incriminating letters on it”. These letters have been used to implicate Wilson and other activists in the case.

The report released by Arsenal Consulting should have ideally gained significance as the NIA’s case is solely dependent on the “evidence” they claimed to have seized from arrested persons, including from Wilson’s computer. Hoping so, the defence lawyers even moved a petition in the Bombay high court. It has been over a year and a half, and the petition is still waiting to be heard.

A few months later, Arsenal Consulting, in another explosive investigation, revealed an eerie pattern of malware attacks carried out on the computer belonging to Nagpur-based human rights lawyer Surendra Gadling. The report, in a blow-by-blow account, has revealed that the attacker had made three particularly relevant attempts at compromising Gadling’s computer through emails. In the report, Mark Spencer, president of Arsenal Consulting, concluded that the attacker in both Gadling and Wilson’s cases was “identical”.

One more independent investigation, this time by the California-based cybersecurity firm SentinelOne, stated that Wilson was subjected to a digital attack since at least 2013. The report also mentioned that several Indian human rights defenders, activists, academics, journalists and legal professionals have been subjected to digital attack since at least 2012. In a 19-page detailed report, the researchers have stated that Wilson was subjected to two specific cyberattacks: one that can be linked to widely documented cyber-espionage campaigns against military targets in China and Pakistan, and another name ‘ModifiedElephant’ by SentinelOne.

Each time these reports were put out in the public domain, it led to a furore. Rights activists and civil society groups from time to time have demanded that the state and the investigating agency looks into these reports closely. Several appeals and petitions have also been made before both the trial and high court. But none of these appeals have been acted upon. Even after four years and three rounds of chargesheets (one main chargesheet and two supplementary), the trial in the case is yet to commence.

Early this year, seven accused persons–Wilson, Bharadwaj, Gonsalves, Hany Babu, Sen, Teltumbde and  Rao–wrote to the Supreme Court-set up Pegasus committee stating that they suspected their devices were infected by Pegasus spyware. The committee had written to the NIA seeking the devices after the pleas of the seven said that they want to submit their devices but are not in a position to do so since they are with the court.

Following the applications, the NIA court had ordered the agency to hand over seven phones to the Supreme Court’s Pegasus committee.