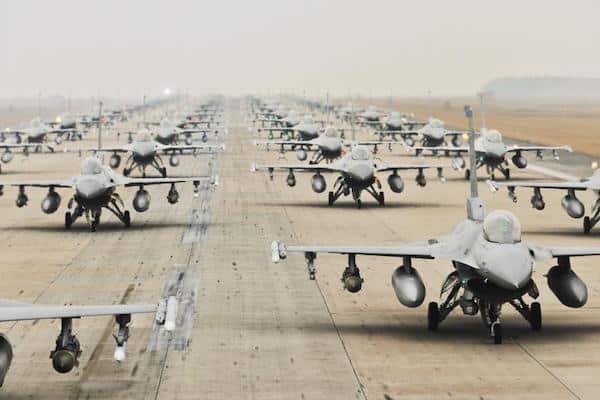 In a massive expansion of U.S. involvement in the imperialist proxy war in Ukraine, the Pentagon is actively preparing to send new, modern military aircraft made in NATO countries to fight against Russian forces in Ukraine, the Washington Post reported Wednesday.

Gen. Charles Q. Brown Jr., chief of staff of the U.S. Air Force, told the newspaper that “discussions are ongoing” to send the fighters to Ukraine. Speaking at the Aspen Security Conference, Brown was asked,

To this, Brown replied,

[i]t’ll be something non-Russian, I could probably tell you that.

Today US Air Force Chief of Staff Gen. Charles Q. Brown effectively has confirmed that the US will provide new, high-end NATO fighters for the war against Russia.

By “non-Russian,” Brown was referring to an earlier proposal by Poland to send Soviet-made MiG fighters to Ukraine which was rejected by the Biden administration on the grounds that it was too likely to escalate the war.

At the time, Biden declared that the move could start “World War III,” saying,

The idea that we’re going to send in offensive equipment and have planes and tanks and trains going in with American pilots and American crews–just understand, don’t kid yourself, no matter what y’all say, that’s called World War III.

Brown’s proposal is, however, a far more provocative move than the earlier plan to send aging and semi-obsolete Soviet aircraft.

His comments came the same day that the Pentagon announced that it would send four more HIMARS long-range missile systems to Ukraine, bringing the total deployed in the country to 16.

“(We) will keep finding innovative ways to sustain our long-term support for the brave men and women of the Ukrainian armed forces, and we will tailor our assistance to ensure that Ukraine has the technology, the ammunition and the sheer firepower to defend itself,” U.S. Defense Secretary Lloyd Austin said Wednesday.

“Ukrainian forces are now using long-range rocket systems to great effect, including HIMARS provided by the United States and other systems from our allies and partners,” Austin said, adding,

Ukrainian and U.S. officials are more and more openly discussing the details of a plan to amass an enormous stockpile of high-end U.S. weapons systems, allowing Kiev to stage a major counteroffensive in the fall with the aim of sinking the Russian fleet and “retaking” the Crimean Peninsula in the Black Sea, which Russia annexed in the wake of the 2014 coup in Kiev.

During a visit to the UK, Ukraine’s Deputy Defense Minister Volodymyr Havrylov pledged to use U.S.-supplied heavy weapons to mount an offensive against Crimea. “We are receiving anti-ship capabilities, and sooner or later we will target the fleet. It is inevitable because we have to guarantee the security of our people,” he said. “Russia will have to leave Crimea if they wish to exist as a country,” Havrylov insisted.

On Saturday, Ukrainian military intelligence official Vadym Skibitsky said that Ukraine would use HIMARS missile systems to attack targets in Crimea, which he said “had to be destroyed for the safety of our citizens, our facilities and our Ukraine.”

The increasingly open talk of a Ukrainian offensive to retake Crimea has prompted extremely sharp warnings from Russian officials.

Our American counterparts … really want to turn this war into a real war and start a confrontation between Russia and European states.

[Ukraine is] not just [being] pumped with weapons. They are forced to use these weapons in an increasingly risky way.

On Sunday, the former Russian president and deputy chairman of Russia’s Security Council Dmitry Medvedev said that an attack on Crimea would pose a “systemic threat to Russia,” prompting a “Judgment Day” response from Russia.

In the event of a Ukrainian effort to retake Crimea, “Judgment Day will come very fast and hard,” Medvedev said.

Geopolitical commentators have warned that Russia views the defense of Crimea as a vital state interest and would use nuclear weapons to protect the territory.

Inviting U.S. arms manufacturers to take part in this joint effort by the United States and the Kiev regime, Ukrainian Defense Minister Oleksii Reznikov openly declared Wednesday that the country should be viewed as a “testing ground” for U.S. defense contractors.

“We are inviting arms manufacturers to test new products here,” he said.

Defense Minister Oleksii Reznikov bluntly describes #Ukraine as a "testing ground" for western arms manufacturers. So much for the fight for freedom & democracy! Ukrainian soldiers are being used as cannon fodder in NATO's filthy proxy war.
https://t.co/CSQyelZO7t via @YouTube

The enormously dangerous escalation of the war comes as the energy crisis triggered by the conflict is having increasingly devastating consequences for the population of Europe and the whole world. “We have to prepare for a potential full disruption of Russian gas,” European Commission President Ursula von der Leyen said Wednesday, calling this “a likely scenario.”

On Wednesday, the EU rolled out a plan for its member states to begin rationing energy supplies, in preparation for a full shutoff of gas supplies over the winter. That same day, the IMF warned that a total shutdown of Russian gas supplies could shrink the economies of some EU member states by 6 percent and send them into recession.

The revelation that the U.S. plans to send NATO-made aircraft to Ukraine comes just two weeks after New York City’s Office of Emergency Management (OEM) released a 90-second public service announcement (PSA), giving instructions to city residents on what to do in the event of a nuclear attack on America’s largest city.

The video begins with the narration,

So there has been a nuclear attack. Don’t ask me how or why, just know that the big one has hit.

The extraordinary recklessness with which the United States is escalating its war with Russia raises the very real danger of just such a disastrous outcome.