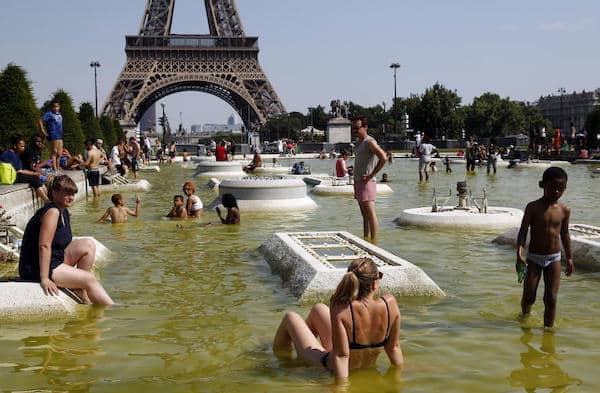 Why apartments are failing the heat stress test. (Photo: Pursuit by The University of Melbourne)

The heat wave devastating southern and western Europe gradually began to recede yesterday, as violent storms brought cooler weather across parts of France and Britain. The heat wave continued in southern Europe, with temperatures close to 40°C across much of southern Spain and Italy, and wildfires are still burning across the region.

Already, the horrific impact of European heat waves caused by global warming is apparent. Health officials confirmed over 1,700 deaths in Spain and Portugal alone, as workers labor in sweltering heat and large numbers of the elderly live without air conditioning. While Spain has lost 15,000 hectares of forest to fire in the last week, Europe’s largest forest fires have been in France’s Gironde, where over 20,000 hectares of forest have been destroyed so far and 40,000 people evacuated.

While the worst of this heat wave may have passed, much of Europe remains in drought conditions. Cities and towns in Italy’s Po Valley region are rationing water. River levels are so low in southern Germany that river-based transport has been suspended. With several weeks of summer to come, more extreme heat waves, continued drought and larger wildfires are highly likely.

Yet already, top officials across Western Europe are signaling that no substantial action will be taken to halt emissions that are fueling global warming, or build the necessary infrastructure to deal with growing droughts, rising ocean levels, and intensifying wildfires.

In Britain, the Tory government, which has cut 11,500 firefighters since 2010, did not even make a pretense of action in response to the heat wave. Deputy Prime Minister Dominic Raab blithely told Britons to “enjoy the heat” on Sunday. Yesterday, cabinet minister Kit Malthouse declared:

Britain may be unaccustomed to such high temperatures but the UK, along with our European neighbors, must learn to live with extreme events.

These comments mimic European governments’ insistence that the population must “learn to live with COVID-19,” which has become a euphemism for mass death and infection without any measures to prevent contagion.

It was the busiest day for the fire service in London since the second world war. They received more than 2,600 calls—more than a dozen simultaneous fires requiring 30 engines, a couple requiring 15, and some requiring 12.

While other European governments’ statements were less provocatively worded, all of them laid out the same policy of inaction and indifference.

Spanish Socialist Party (PSOE) Prime Minister Pedro Sanchez, who rules in coalition with the pseudo-left Podemos party, tried yesterday to adopt a pose of concern. He announced that over 500 Spaniards had died from the heat, though Spain’s Carlos III Institute had confirmed 678 heat-related deaths the day before. Sanchez concluded by asking “citizens to exercise extreme caution” and to recognize the blindingly obvious fact that “climate emergency is a reality.”

On Wednesday afternoon, French President Emmanuel Macron travelled to La Teste-de-Buch in Gironde to meet with firefighters who have been fighting to contain blazes in the region since July 12. He remarked, “We are at the beginning of the season… We know that it will take several weeks to completely stabilize the situation.’

Trying to put the best face on the situation and look forward to the future, Macron added:

There is the day after. After [the fire is extinguished] we will have to replant and rebuild … We are going to launch a major national project to replant this forest and prevent the risks of today and tomorrow.

These vague remarks, void of any concrete proposals beyond replanting trees, signal that there will be no real change to his government’s approach to global warming and extreme weather. Indeed, in 2019 French fire-fighters threatened to go on strike against low staffing levels and poor equipment. Though France has among the larger fleets of water-dropping planes in Europe, it is too small, concentrated around the city of Nîmes, and arrived too late to prevent the blazes in Gironde from escalating beyond a size the planes could put out.

The decisive question in addressing climate change and its impact is the mobilization of the working class and youth in a political struggle, taking as its point of departure that fighting climate change requires fighting the capitalist system. It is apparent that Europe’s capitalist governments have no plans to make the vast investments in research and infrastructure that are necessary to protect the population from deaths in future heat waves and wildfires, or halt greenhouse gas emissions that are driving global warming.

Despite differences in presentation, Macron, Sanchez and the Tories follow the same fundamental policy toward global warming and resulting extreme weather events. While they hand out trillions of euros to the banks and corporations and pour hundreds of billions into NATO’s war against Russia in Ukraine, no resources are left to take meaningful action on climate change. It is impossible, as Europe descends into war, for capitalist governments to internationally coordinate such action. As a result, nothing is done.

This has had disastrous consequences. Since the pre-industrial era the world’s temperature has risen 1.1 degrees Celsius. The 2015 Paris Accords, hailed by world governments as the solution to global warming and its effects, sought to limit this rise to 2 degrees Celsius. Even if one were to suppose that capitalist governments were to stay within this limit, the consequences of just half the target level are already proving to be deadly.

The last five years have already seen unprecedented wildfires in Australia, Portugal, Greece, Russia and the U.S., wiping whole towns off the map. In the last year, flash floods, another consequence of global warming, have killed thousands in Australia, India, Bangladesh, Germany, the U.S. and Turkey.

Despite scores of deadly wildfire events throughout the Mediterranean in recent years, including 66 deaths in Portugal in 2017 and 90 deaths in Algeria last year, neither the EU nor national governments made any major changes to prepare for wildfires like the current ones.

In Greece, which experienced its worst wildfire season on record last year, evacuations are continuing on Mount Penteli just north-east of Athens. Winds of 80 kilometers per hour are driving a rapid expansion of the wildfire burning in that area. The localities of Drafi, Anthousa, Dioni and Dasamari have all been evacuated, including a hospital. Emergency firefighters have been called in from Romania to assist in the battle against the blaze.

Workers and young people must draw the necessary lessons from the inaction of capitalist governments across Europe and the world against wildfires and global warming. The struggle against climate change and to protect the environment is a political and class struggle. As is the case with the ongoing COVID-19 pandemic, war and inflation, the only solution to global warming is a direct assault on the ill-gotten wealth of the capitalist class and the socialist transformation of world society.