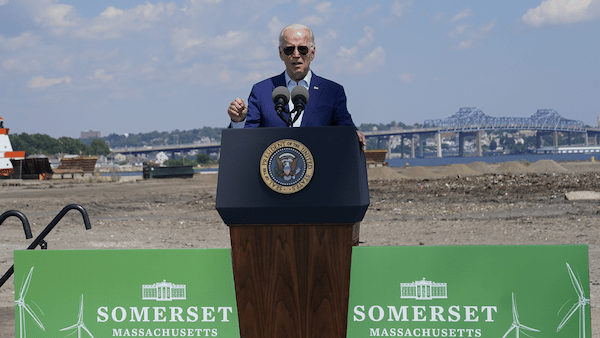 President Joe Biden’s surrender on climate policy amid the intensifying crisis has prompted his own agency experts to sound a rare public alarm about their boss’s retreat, according to a letter being circulated throughout the administration and Capitol Hill.

The letter to Biden and Senate Majority Leader Chuck Schumer (D-N.Y.)–provided to The Lever by a House Democratic staffer–is initialed by 165 staffers at federal health and environmental agencies and at 75 congressional offices. They are demanding the president use more aggressive tactics to pass his long-promised climate agenda through the Senate.

“President Biden, you have an exigent responsibility to reduce suffering all over the world, and the power and skills to do so, but time is running out,” says the letter, which is now being circulated throughout the administration for more signatures. “You are the president of the United States of America at a pivotal moment in the history of the world. All that we ask is that you do everything in your power. We’ve done our part. We implore you to do yours.”

The letter was provided to The Lever by Saul Levin, a House Democratic staffer and coordinator of the Congressional Progressive Staff Association Climate Working Group. The officials signed the letter anonymously with their initials, to protect against political retribution. Another House Democratic staffer confirmed that the letter was being circulated to government officials for their signatures.

​​“Our house is on fire, and Manchin burned the stairs. Democratic leaders are walking away,” Levin told The Lever. “We cannot. We must test the fire escape, find the fire extinguisher, tie some sheets together if we have to: Our lives depend on it.”

Levin was referring to Sen. Joe Manchin (D-W.Va.) once again proclaiming that he was walking away from negotiations on $375 billion in clean energy tax credits. It also follows Biden declining to declare a climate emergency, which would allow him to institute a ban on crude oil exports, halt fossil fuel imports, and block investments in fossil fuel projects, among other things.

Echoing the letter, Rep. Ro Khanna (D-Calif.) told The Lever: “President Biden must declare a climate emergency now. This is the time we need a moonshot for renewable energy.”

This unusual action from staffers at Biden’s own agencies spotlights the high stakes of the moment–the window of opportunity to pass climate legislation under a Democratic trifecta may be coming to an end, and it could be years before massive investments in clean energy become possible again.

The letter calls on Biden to “immediately declare a climate emergency and end fossil fuel extraction on federal lands. Then, and most importantly, you must intervene in stalled Senate negotiations.”

While the average age of a U.S. senator is 64, and Biden is 79, the average staffer is much younger–and will live through the consequences of their bosses’ inaction.

Specifically, the staffers are calling on Biden to send a public letter to Manchin giving him two options.

“The first option must be for Senator Manchin to vote to pass the House Build Back Better climate justice provisions by the end of July, as part of a reconciliation package,” the staffers wrote.

The second must represent a bold and creative alternative that Senator Manchin understands to be much worse. For example, you and Senator Schumer could strip Senator Manchin of his Chairmanship of the Senate Energy and Natural Resources Committee, shut down the Mountain Valley Pipeline Project, eliminate the use of mountaintop removal and coal burning, and establish stringent water and air pollution standards.

Just days after they sent that letter, Manchin told Democratic leadership, after weeks of negotiations, he would not support a reconciliation package that included climate spending. He soon hedged, saying he would potentially support a broader package after the August recess if inflation seems to be abating.

Manchin’s concerns about inflation should ring hollow: There is overwhelming consensus among economists that subsidizing clean energy would actually reduce inflation by making energy cheaper for consumers.

Summarizing academic testimony to lawmakers, climate reporter David Wallace-Wells noted in a recent column that “the public health costs of air pollution [are] so high that a total decarbonization would entirely pay for itself through the public health benefits alone. You don’t even need to consider climate, in other words, for decarbonization to make sense, even according to the strictest cost-benefit analysis.”

On the other hand, Manchin is a millionaire who has made his fortune in coal and has taken more campaign contributions from the oil and gas industry than any other senator. Every year, Manchin receives hundreds of thousands of dollars from a coal brokerage that he founded and which his son now runs.

After Manchin’s declaration imperiling the climate spending, Biden urged Democratic congressional leadership to move ahead with a much smaller spending package that would only include an extension of Affordable Care Act subsidies and a prescription drug price negotiation provision.

Last Wednesday, Schumer confirmed that the Senate would move forward with the health care-only reconciliation bill, saying they would make a renewed push for climate spending after July’s inflation numbers are published. “There is always a second reconciliation bill available to us,” he told E&E News.

Other senators have been less willing to give up on a climate package.

“We’re much closer to a climate deal than people realize,” Sen. John Hickenlooper (D-Colo.) tweeted after Schumer announced the Senate would proceed with a health care-only package. “Let’s not throw in the towel just yet.”

But, by publishing this letter, staffers are telling the public that Biden and Schumer have given up too early, especially when the stakes are so high.