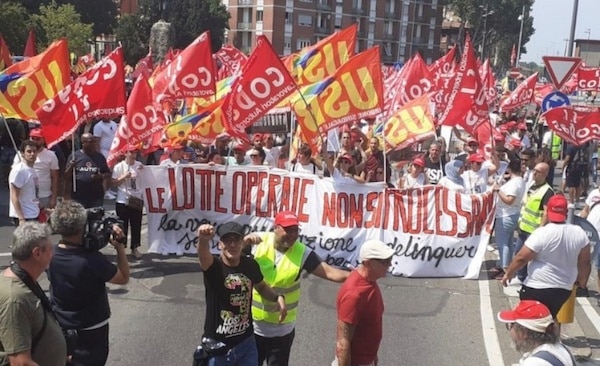 With a massive demonstration held in Piacenza, in Italy’s northern region of Emilia Romagna, thousands of workers, men and women, people of every age, demanded the release of the eight trade unionists of Si Cobas and USB who remain under house arrest.

The trade unionists were placed under house arrest and searched on July 19th, based on a 350-page indictment of the Piacenza Public Prosecutor’s Office against USB and Si Cobas unions.

They are accused of instigating and organizing strikes and mobilizations at warehouses of multinational logistic monopolies, including Amazon, FedEx-TNT, Nippon Express and others. A few months earlier, in April, police officers raided the national headquarters of USB under the pretext of searching for weapons. The police raid took place after protests organized by USB against the use of Italian ports, such as the one of Genova, to dispatch ammunition and arms to be used in the imperialist war in Ukraine. 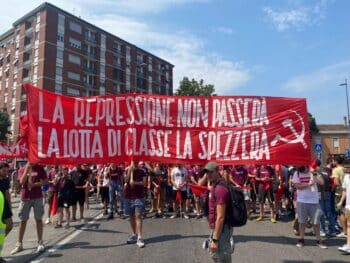 Banner of the Front of Communist Youth (FGC) in Piacenza rally.

In a joint communique issued on July 20th, Si Cobas, USB and other trade unions point out that they “are facing a large-scale political attack aimed at outlawing strikes and bargaining in companies, thus definitively eliminating the class and conflict union from the workplace”. They add that “the advance of the capitalist crisis and the growing social malaise following the war economy and the high cost of living, produce an ever more stringent offensive against the workers, and in particular against the trade union and social avant-gardes of struggle”.

The Front of Communist Youth (Fronte della Gioventu Comunista, FGC) has expressed its full solidarity with the trade unionists and participated in the Piacenza protest.

In a statement published in social media, FGC points out:

Thousands demonstrated in Piacenza to give a clear answer to those who want to suppress the workers’ struggle. Free the imprisoned union activists: Union struggle is not a crime! The criminal organization is the corporate bosses and their governments.

We are ready to respond swiftly to any attack. This should only be the first step in building a great united general strike of all class and combat forces.The repression will not prevail–the class struggle will crush it!.

KKE MEPs: Question on the unacceptable persecution of trade unionists in Italy

The MEPs of the Communist Party of Greece (KKE) submitted a question to the European Commission denouncing the persecution of trade unionists of USB and SI Cobas in Italy, who are demanding an improvement in their working conditions.

Lefteris Nikolaou-Alavanos, MEP of the KKE, submitted the following question to the European Commission:

What is the Commission’s position:

On the demand for the workers’ immediate acquittal from all accusations, as well as the release of the 8 trade unionists under house arrest?

It is obvious that the militant struggles of the class-oriented trade unions bother the bourgeois class, its state, and its political representatives who blatantly violate any notion and concept of trade union and democratic rights and freedoms. The trade unions and trade unionists are being persecuted for organizing strikes, protests, and demonstrations in the logistics sector. They are openly and unashamedly being persecuted because they are defending their own class interests and fighting for dignified working and living conditions.

This new attack must not remain unanswered by the class-oriented trade union movement and all those who are opposing the authoritarian practices that are increasingly imposing all over the world.

The World Federation of Trade Unions calls upon its affiliates to stand beside the trade unionists in Italy and condemn the new attacks with a protest to the embassies and consulars of Italy in their countries, sending the clear message that the workers in Italy are not alone and the attempts to subordinate the militant unions are in vain. They cannot stop the class struggle, they never could!