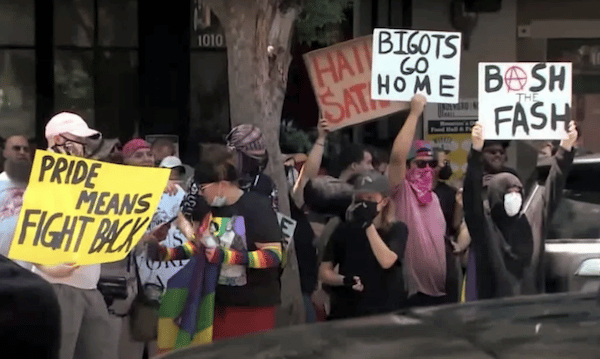 Thirty-one members of the white supremacist Patriot Front from across the U.S. were detained after preparing an assault on a Pride festival in Coeur d’Alene, Idaho, June 12.

On the July 4 weekend in Camden, Ohio, Noah Ruiz, a trans man, was beaten by four men after being forced to use a women’s restroom at a campsite. The victim was arrested by the police and spent the night in jail. It took legal action by Ruiz to force the cops to arrest one of his attackers on July 18; the other three have not been charged.

In Pensacola, Florida, July 18, Alisabeth Lancaster, a candidate for the Santa Rosa County School Board declared that doctors who provide gender-affirming care to trans youth “should be hanging from the nearest tree,” to applause from the audience. The video of Lancaster’s lynching threat went viral on social media.

Lancaster was echoing Florida’s state government, headed by notorious homophobe Ron DeSantis, which is preparing to ban gender-affirming care for minors and detransition adult Medicaid recipients while laying the groundwork for a complete ban on trans health care. Activists around the state are organizing to intervene at a hearing on the proposed ban Aug. 5.

During Pride month in Baltimore, four houses burned and three people were hospitalized after bigots set fire to a rainbow flag on a resident’s porch. In Boston, the construction site of an LGBTQ2S-friendly affordable housing project was vandalized with hate speech and threats on the weekend of July 9.

In Texas, where the governor has ordered child protective services to investigate parents and health-care providers for “abuse” if they support trans children, families are uprooting their lives and fleeing to other states. That includes Kai Shappley, an 11-year-old trans girl who in 2021 testified about the importance of gender-affirming care at the state capitol in Austin.

From the San Francisco Bay area to Chicago, drag queen story hours and drag shows have been threatened and attacked by Proud Boys and other neo-nazis, often aided and abetted by local cops. Increasingly, communities are organizing to resist these attacks, as they did in Houston July 10, where defenders shouted down the bigots.

(Drag performers and trans people are not the same, though the ultra-right conflates the two groups and smears both with false claims of being “groomers” and “pedophiles.”)

These are just a few examples of what are now daily attacks on queer communities from coast to coast, especially targeting and scapegoating trans people.

These vicious assaults–some spontaneous, but often planned and organized–cannot be separated from the nationwide political attack on trans rights and abortion rights.

From the dozens of state legislatures that have enacted or plan to enact restrictions on trans lives and women’s lives, to the highest court in the land, the right to control one’s body and identity is being systematically stripped away.

After its Dobbs decision overturning the right to abortion, the Supreme Court majority has signaled it will next come after constitutional protections for same-sex marriage, contraception and protection from so-called “sodomy” laws.

With its spate of reactionary decisions in June, the Supreme Court carried out a coup d’etat, establishing itself as the de facto government in service to the growing fascist-oriented wing of the ruling class and the Republican political establishment.

The elected government headed by Democrat Joe Biden and Democratic majorities in both houses of Congress have signaled their unwillingness to oppose the coup in any meaningful way.

The anti-trans panic cannot be separated from the bourgeois liberal establishment, either, where numerous figures from Hillary Clinton on down have expressed their disdain and disinterest in defending trans people.

Media outlets from the New York Times and Washington Post to The Atlantic magazine have joined the pile-on with “fake news” articles and op-eds attacking gender-affirming care, trans people’s participation in sports and more, taking up the same arguments spouted by the far-right.

A deeply insidious effort to divide the women’s movement and the broader LGBTQ2S community from trans people is underway. It attempts to cast blame on trans people for the overturning of Roe v. Wade, claiming their existence somehow undermined the definition of “woman,” rather than uniting to fight the real culprits–the politicians in Washington and the state houses and the capitalists behind them.

Against this sabotage, it’s urgent for all groups fighting for abortion rights to follow the example of the Louisiana Abortion Rights Action Committee and others calling for a national week of civil disobedience in September. Their calls and statement are inclusive of all people who need abortion rights and bodily autonomy, and include trans people among their organizers and spokespeople.

What’s at stake for workers? Everything!

What’s really behind these escalating attacks on trans lives–and what’s at stake for the working class?

Publicly out, self-identified transgender, non-binary and gender-nonconforming people make up only about 1% of the U.S. population. Yet the community has been transformed into a monstrous bogeyman by the ultra-right, and increasingly by “mainstream” centrists and liberals as well.

It’s true that today more people, especially younger people, identify as trans or nonbinary than they did 10 or 20 years ago. That’s because hard-fought struggles have increased trans visibility, and more people now recognize and embrace their true selves. Much the same happened throughout the 1970s, 1980s and beyond with gay, lesbian and bisexual people.

And like that earlier breakthrough in queer visibility, those who seek to divide and conquer the working class have seized on this positive development to spread reactionary hate based on fear.

The attacks on gender-affirming care for trans youth are especially horrifying to anyone who understands the dangers for those denied the right to transition and live as themselves. Earlier this year, a study published by the Journal of the American Medical Association found that gender-affirming care reduced suicide attempts by up to 73%.

But the anti-trans bigots attempting to stir up a panic about “corruption” of children don’t care about their lives, any more than anti-abortion bigots care about the well-being of children that result from forced births.

Just as gay men were scapegoated and denied care during the HIV/AIDS crisis of the 1980s, today trans people are being spoken of as an “infection” that must be repressed, denied health care and kept away from children and youth who might see themselves reflected in trans lives.

And just like in the 1980s, when the Reagan administration used witch-hunts against “welfare mothers” and AIDS victims to distract from its union busting, Cold War nuclear buildup and vicious austerity measures, today the U.S. ruling class has settled on trans people as a scapegoat for the crisis of its system: the stripping away of people’s basic rights, skyrocketing inflation, abandonment of public health, proxy wars that threaten to ignite World War III and global environmental catastrophe.

Trans people have also been targeted for the militant role many have played in other struggles against the system. Trans people were front and center during the mass uprising for Black Lives in 2020. Trans people are also key to many of the ongoing union organizing efforts peeling away the thin “progressive” veneer of megacorporations like Starbucks and Amazon.

Today, there is enormous fear within the trans community. People are preparing for the possibility that all gender-affirming care will be banned in the near future nationwide and that trans people will risk arrest for living publicly. Some are trying to find the means to flee the country, while others have declared they will stay and fight. Most are simply trying to survive day by day and live their lives under the darkening skies.

If you know a trans person, reach out to them and offer your solidarity. If you hear coworkers or family members spouting anti-trans rhetoric, stand up to them. Make sure that your union, your community organization, your movement is welcoming to trans people and takes a strong position in their defense.

History shows that the scapegoating of oppressed groups always snowballs from one to the next. The rights of the broad LGBTQ2S community are next on the chopping block. Reproductive rights and Black people’s voting rights have already been deeply wounded, and more attacks are in the offing.

Trans people may be the current targets on the front line of capitalism’s war on workers. But if we don’t unite and fight back now, you can be certain that others–including you, dear reader–will not be far behind.