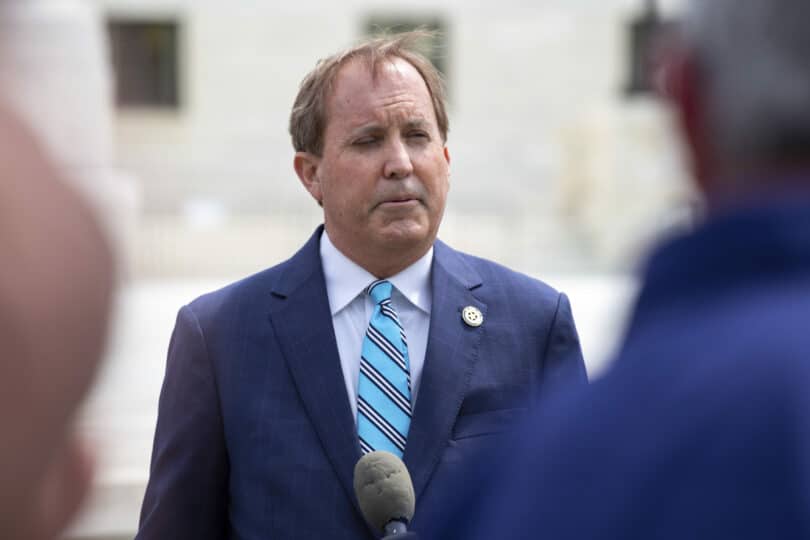 Nothing says “family values” like fighting for the right to starve LGBTQ+ kids.

That’s the latest from Texas Attorney General Ken Paxton, who last week joined more than 20 other Republican attorneys general to file a lawsuit against the Biden administration over a Department of Agriculture school meal program that prohibits discrimination based on sexual orientation and gender identity.

Legal experts warned that the decision, and the majority’s pseudo-methodology in reaching it, had implications far beyond abortion. Michele Goodwin, chancellor’s professor of law at the University of California, Irvine, said we should consider “anything that involves substantive due process and/or privacy done and gone.” She cautioned that anything having to do with sex, gender, contraception, sex education, and the configuration of our most personal relationships would be up for grabs.

Even before Dobbs, LGBTQ+ people, but especially transgender folk, were being teed up to replace abortion as the new fire-up-the-base issue. In my post-Dobbs piece for this publication, I prophesized that Texas’ role under the winking eye of the newly packed Supreme Court was to keep competing with the likes of Florida—that other state governed by a would-be 2024 Republican presidential contender—for who could create the most outrageous restrictions and the most retrograde legislation on every topic touched by the liberty clause of the 14th Amendment.

So here we are, in the state that has already begun opening child abuse inquiries into the families of transgender kids, with the GOP’s rising stars competing for the prize of LGBTQ+ kid-starver-in-chief. Not to be outdone by Texas, Florida Governor Ron DeSantis issued a July 28 memo telling Florida public schools to ignore USDA guidance clarifying they can’t deny lunch money to queer and trans youth.

The litigants have the confidence of AGs with a tried-and-true strategy. This week’s USDA suit was filed by the same Tennessee attorney general whose lawsuit from last August recently resulted in a Trump-appointed U.S. district judge temporarily barring two federal agencies from enforcing a different set of LGBTQ+-themed Biden administration directives until the matter can be resolved by courts.

Plaintiffs had argued that protections for LGBTQ+ people in schools and workplaces “infringed” on states’ right to discriminate against them (for example, by enacting laws that ban students from participating in sports based on their gender identity). So, while this week’s suit only impacts USDA programs and has nothing to do with the participation of trans athletes or other policies, its litigants are pressing well-worn buttons and following a familiar playbook.

To be clear, Dobbs is neither the direct cause nor the direct object of either of these suits. The conservative AGs bringing them are trying to limit, gut, and overturn the Supreme Court’s 2020 ruling in Bostock v. Clayton County. Back then, a very differently composed court decided that Title VII of the Civil Rights Act, which bars job discrimination based on sex, also precludes bias against people because of their sexual orientation or gender identity.

“An employer who fires an individual for being homosexual or transgender fires that person for traits or actions it would not have questioned in members of a different sex,” Justice Neil Gorsuch wrote for the 6-3 majority.

Sex plays a necessary and undisguisable role in the decision, exactly what Title VII forbids.

“These suits are trying to limit Bostock’s reach to other sex-discrimination laws,” explains Gillian Branstetter, an advocate and communications strategist at the ACLU’s Women’s Rights Project and LGBTQ & HIV Project.

If they allow for any non-discrimination policy that protects transgender students, they’re allowing for the legitimacy of Bostock. That’s what’s behind their challenge to any and every attempt to protect transgender people under the law. Limiting access to sports, lockers, and bathrooms. And now, fighting for the right to deny the lunch money.

It must have burned the ultra right that Justice Gorsuch, a Trump appointee, wrote the opinion for Bostock. (No less a Constitutional authority than Senator Josh Hawley of Missouri described it as representing “the end of the conservative legal movement as we know it.”) How sweet that Gorsuch now sits with the majority on such a very different court.

What Dobbs does represent is the largest of the green flags this court’s new ultra-conservative majority has waved to signal the start of their race to overturn any precedent that stands in a Paxton’s or DeSantis’ way, having already demonstrated its unwillingness to interfere with so-called “states’ rights” as far back as September 2021. That’s when the court denied Texas abortion providers’ request for emergency relief from Senate Bill 8, which banned abortion at around the six-week stage in defiance of Roe.

“So-called states’ rights” because it’s also clear that this new ultra-conservative court will switch off between that argument, ceding authority to Congress, and claiming authority for itself at will. Legal commentator Dahlia Lithwick put it best while summing up the newly composed court’s first term, which concluded with the court deciding to take up a case from North Carolina next term about giving state legislatures the sole authority to set the rules for contests—an idea instantly recognizable to those of you who have been following the January 6th hearings as Trump lawyer John Eastman’s dream scenario. Lithwick, speaking the week after the Dobbs decision, warned against trying to understand the majority’s decisions through the lens of legal precedent, logic, or doctrine, concluding:

It is not doctrine. It is just a checklist of what this conservative legal movement has always wanted.

If the bad news is the ubiquity of the radical right playbook, the good news is that the USDA suit provides an excellent opportunity to teach two key constituencies how to oppose it: the significant portion of the public that supports transgender people and their rights but hasn’t been sure how to counter the attacks, and similarly situated politicians.

“One of the reasons I wanted to animate this issue is because the moral lines are super clear,” said Branstetter, who has helped to sound the alarm about the USDA suit from her Twitter account.

The right has activated anti-trans rhetoric and people. It’s vicious and ugly but it’s not meant to win over moderates, who already see it as disgusting and vile. It’s not popularizing: It’s radicalizing. It’s animating a base that’s already with them.

Which is precisely what Democrats have failed to do. Energize their base. Give people something to believe in. Let supporters know that they’ll go to the mat, even against the odds. (See Biden, Joe, whose first response to Dobbs was to lecture pro-choice demonstrators about the importance of not getting too rowdy.)

Rising Democratic politicians like California Governor Gavin Newsom and Pennsylvania Lieutenant Governor (and 2022 U.S. Senate candidate) John Fetterman have taken the lead on what should be a no-fail “let’s not starve LGBTQ+ students” message. And this coming week’s Senate vote on the Respect for Marriage Act, which would enshrine same-sex and interracial marriage in federal law, should serve as a reminder of how swayable Republicans in tough re-election bids who are counting on the youth and woman vote can be.

There’s a way forward if Democratic leaders are willing to seize the day.