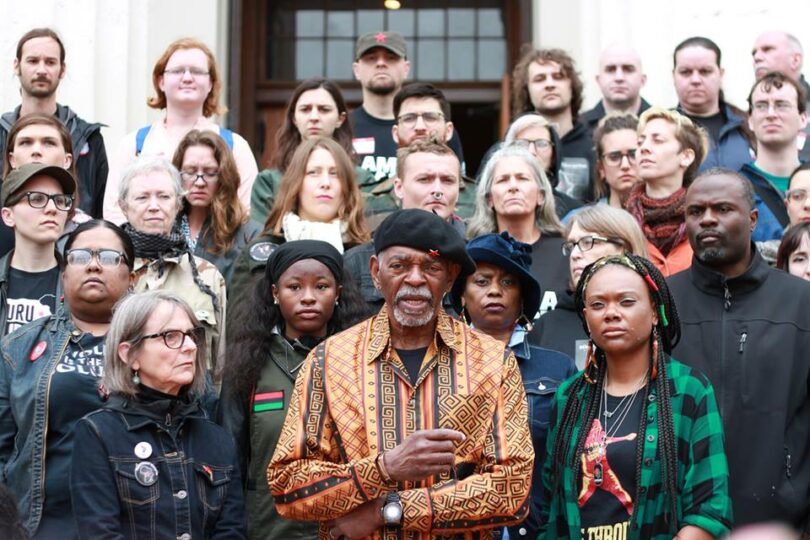 Based on the description, APSP appears to be one of several unidentified groups and people implicated in a 25-page indictment of a Russian national, Aleksandr Ionov. The Moscow-based founder of the nonprofit Anti-Globalization Movement of Russia (AGMR) has been accused of attempting to influence U.S.-based groups to turn against the United States and work in favor of Russia.

“Anyone who opposes U.S. imperialism or who has made common cause internationally is endangered,” Black Agenda Report Executive Editor Margaret Kimberley wrote on Facebook.

Not surprising that a Black organization is the first on their hit list.

The raid began at 5 a.m. July 29 at the Saint Louis home of APSP Chairman Omali Yeshitela and his wife and APSP Deputy Chair, Ona Zené Yeshitela.

Yeshitela said in a Facebook livestream later that day that the APSP was targeted for its support of Russia during the military operation the country has been undertaking in Ukraine since February 24.

Among several allegations, the FBI accused Ionov’s group of paying U.S. activists to attend two conferences in Russia. It also said Ionov helped a group conduct a tour in the United States to drum up support for a petition charging the U.S. government with committing genocide against African descendants. Yeshitela admitted meeting with Ionov twice in Russia.

“Suddenly, we’re supposed to become tools, like Black people don’t have minds of our own to find out what our reality is and who’s responsible for it,” Yeshitela said in the livestream.

It’s white people doing self-criticism and uniting to give money. That’s where the money is coming from, Uncle Sam.

Yeshitela said while the United States was targeting Black activists, it has failed diplomatically.

“They’re doing this, in part, because not a single African country—not even neocolonial sycophants—want to unite with the United States and the United Nations in terms of how they are targeting Russia in this Ukraine-Russia question,” he said, referring to the economic sanctions slapped on Russia after it entered Ukraine in February. When Ukrainian President Volodomyr Zelensky recently held a virtual meeting with African countries, 93 percent of heads of state did not attend, despite Western pressure.

“This exposes the crisis the United States, that U.S. imperialism, is in,” said APSP Director of Agitation and Propaganda Akilé Anai in a livestreamed press conference in Saint Petersburg. Anai said FBI agents lured her outside her home early Friday morning, saying her car had been broken into. Upon opening her car, they forced her to hand over her devices, she said.

Yeshitela, 80, said he and Ona were awoken Friday morning to the sound of a voice blaring through a megaphone outside their home, asking them to come outside with their hands up. Flashbang grenades were set off throughout the working-class Saint Louis neighborhood, Yeshitela added. He also said a drone almost hit Ona’s face after she opened the home’s front door. Law enforcement agents lately have deployed drones into buildings to conduct a visual search before agents enter.

Yeshitela said FBI agents handcuffed the couple and forced them to sit on the street curb while agents scoured their home. “They indicated they had a search warrant related to the indictment,” he said. The FBI freed the couple after several hours, but not without confiscating from their home all of their devices, such as computers and phones, according to Yeshitela’s livestreamed account.

The FBI was unavailable as of press time.

Black activists have long denounced the U.S. government’s anti-communist rhetoric going back to the early 20th century, saying such calls to take down communists really have translated into attempts to dismantle Black liberation movements and other liberation movements in the United States.

“In reality, what anti-communism/anti-Marxism does is to transform anything counter-hegemonic or non-conforming into subversion, foreignness, or disloyalty by punishing it as communist, communist inspired, or communist infiltrated and therefore illegal, illicit or criminal,” said Dr. Charisse Burden-Stelly in a recent talk.

Burden-Stelly, an associate professor of African-American Studies at Wayne State University, has written a soon-to-be-released book, Black Scare, Red Scare (2023). It attempts to document how the U.S. government’s anti-communist policies repress Black and other oppressed people for organizing for their liberation. This, she has said, helps to protect what she calls “racial capitalism,” in which the most degrading labor is forced upon increasingly exploited racialized groups.

“We agree that APSP doesn’t have to apologize for fighting for justice for all oppressed and particularly African People like our ancestors Marcus Garvey, Malcolm X, Martin Luther King, and the Black Panther Party who were spied on, jailed and assassinated for standing up for the freedom and justice for African People worldwide,” said the central committee of Pan-Africanist organization All-African People’s Revolutionary Party in a statement issued Saturday.

Activists like Malcolm X and Martin Luther King, Jr., who were called communists, were assassinated. Jamaican activist Marcus Garvey, who advocated for the unification of Africa under Pan-Africanism and the end of European colonialism in Africa, was briefly imprisoned in Atlanta for what some consider the politically motivated charge of mail fraud. Trinidad and Tobago-born U.S.-based communist Claudia Jones—after whom Toward Freedom‘s summer editorial internship was named—was deported to the United Kingdom for her activism.

“We believe this repression to be a hysterical response to the United States’ loss of legitimacy in the context of the deepening crisis of capitalism and U.S. global hegemony,” said the Black Alliance for Peace (BAP)’s Coordinating Committee in a statement released Saturday.

The unleashing of policing and counterintelligence forces domestically and increased militarism and warmongering abroad in the name of national security are the only avenues left to the U.S. ruling class that is engulfed in an irreversible economic crisis. They represent the hallmarks of a naked fascism that the U.S. ruling class appears to be increasingly committed to in order to maintain the rule of capital.

Then BAP added a warning in its statement.

While it is APSP today, it will ultimately be the rest of us tomorrow. Resistance is our only option.

\Julie Varughese is editor of Toward Freedom.