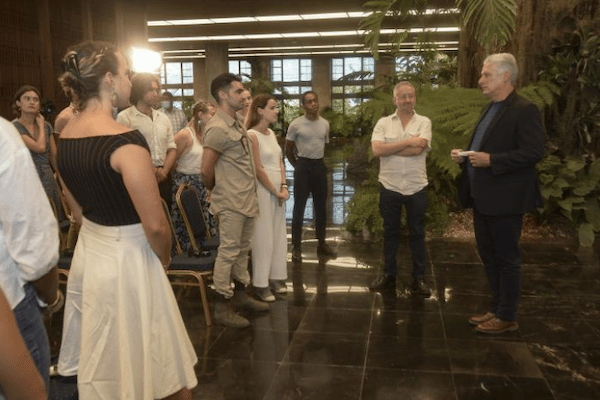 Díaz-Canel assured that between the Cuban and United States peoples there is a relationship of respect, friendship and fraternity. (Photo: Estudio Revolución)

“Thanks for the meeting, for the time, and for building bridges,” said the First Secretary of the Central Committee of the Party and President of the Republic Miguel Díaz-Canel Bermúdez in a meeting in the afternoon of July 12 with a group of students from New York University’s The New School, who are attending a summer course sponsored by Casa de las Américas.

The meeting was held in the Portocarrero Hall of the Palace of the Revolution, where the Head of State greeted each of the participants and answered their questions with sincerity. He expressed his certainty that there can be “many bridges” between Cuba and the United States because both countries “are not so far apart” and their peoples “are going to know each other increasingly better, and love each other increasingly more.”

He also spoke of the beautiful lesson human beings can witness into the future: the relationship between two peoples, free of hatred and full of possibilities for sharing and complementing each other. With the optimism that has characterized the Cuban resistance, he stressed that the terrible roadblock posed by the U.S. blockade, can also be lifted with the support of friends.

The meeting turned into a very humane, exciting afternoon, in which Díaz-Canel was accompanied by Minister of Culture Alpidio Alfonso and president of Casa de las Américas Abel Prieto Jimenez.

“Let’s talk a little about socialism,” the host said at one point on this far-reaching issue. In a comprehensive explanation, he explained that “for us socialism is to achieve the greatest possible social justice,” in a kind of logic that differs from the capitalist, imperial, hegemonic logic, in which man is the wolf of man and in which the aim is to fracture identities and cultures that do not want to align themselves with the logic of the current empire.

After an analysis on the platform of neoliberal and neocolonial domination that the United States is pushing, the President addressed the ideological edge of such expansion: “They rely on an enormous and intense media strategy, especially in the social networks, to discredit the Cuban Revolution. There are attacks every day,” he denounced. And he recalled that such events may be normal in other latitudes, but they are taken to all negative extremes to manipulate emotions if they occur on the island.

In that war, the real causes of the problems are ignored, “and then they try to personalize the causes of those problems in the Government, in the State, in the leaders to seek a rupture between the people and the Government, and confuse on that basis,” he emphasized. It is a media scaffolding made of lies and perversity, with the support of something as seductive as the entertainment industry, he said.

Returning to the “ideals of building a more just society, where there is economic growth with development and social equality,” the Head of State did not overlook that “our economy is an economy of war, of blockade;” that does not renounce to reach everyone from variables as important as social security and by offering many possibilities of human fulfillment.

The Revolution is working for the future it aspires to, he affirmed. “What happens is that the Revolution has never been able to develop its project of socialist construction in a linear way or in a favorable situation, because it has been under a blockade since its emergence, since it declared itself socialist. What would become of this country if we did not have a blockade?” he asked the young Americans as a way of reflection.

“We have not attacked the United States in any way. This is an asymmetrical situation. We as a country would never do anything against the American people-first by vocation, by feeling, we are not a danger to the security of that nation, and much less to its people,” he recalled.

“We do not hate; we love love and, if we hate something, it is hatred itself.” Díaz-Canel spoke of the talent and drive of the Cubans, qualities that could have taken us much further if there had not been an encirclement that he described as an unethical action. Cuban socialism, he said, “defends the dignity of man, that man should not be humiliated, sullied, exploited, discriminated against. That is our conception of socialism, and to which we do not renounce. What would the future hold for Cuba, if the Revolution were to be lost? Would it be developed capitalism? he asked.

No question was left unanswered: the president spoke about music -about his preferences, which include giants such as Silvio Rodríguez, the Nueva Trova in general, and emblematic figures of American culture, including genres such as jazz. He also talked about Havana and its architecture, youth, the development of sports and how women have stood out after the triumph of the Cuban Revolution in 1959. They talked about complex challenges such as housing, or about the ways of governing the country from within.

“I think I answered all the questions,” said the Head of State, affectionately, to the students. And then he wanted to know: “How you feel? A young girl told of her gratitude and how Cubans showed a people that knows how to be open and welcome all those who want to know and love them.

It seemed that the meeting was about to end, but the young woman wanted to know what it feels like to have a responsibility like the one Díaz-Canel has in today’s Cuba on his shoulders.

“I try to follow in the footsteps of two giants every day, with the conviction that I am not a giant myself,” he replied. And he spoke of what is left to be done to improve in order to continue sustaining and renewing the Revolution: “We know that many people in the world are looking with faith, with hope” at the Revolution; and we feel greatly committed to these realities.

He spoke of the “commitment with the Revolution with which one was born,” on behalf of all the comrades working in the leadership of the country. He emphasized “the commitment with the Cuban, heroic people, who have endured 60 years of blockade, and who do not give up.”

Sometimes, hard truths have to be told, he reflected; “we have to work with great honesty, with great transparency.” In reference to Fidel and Raúl, he said:

To follow in the footsteps of those giants, we need more and more collective leadership; that is why we are so involved now in these issues of how to create more spaces for participation, so that people are more involved in decision making, so they can contribute all their wisdom.

“If one follows the people and what they are saying, one can move forward, knowing where the mistakes were made, and where the causes generated by the blockade are, which has been particularly hard in these years of pandemic, ” he reasoned.

When one is worthy, there is respect; the beauty of life lies in the challenges; one must know how to overcome setbacks, he said. As for the great responsibility of leading Cuba, Díaz-Canel said:

One grows as one learns, one dominates issues as one goes deeper into them; especially when there is room for improvement, especially when you see you helped people improved their situation, when you see the country is moving forward, it makes you proud, it is very uplifting.

He also spoke of the tremendous admiration he feels for our scientists those who knew how to defend “the life of the country” with the vaccine against COVID-19:

We have a beautiful people -you have seen it-, people with feelings; that when they set their mind on something, they do not give up until they make it possible; and with stoicism.

He then shared a definition of special value:

the Cuban people do not want to be slaves, we will never be slaves again, and we will defend the Revolution. What we have to achieve is that the Revolution makes no mistake, he stressed before the students.

At the end of the meeting, in which Cuba showed itself with its concerns, reality and challenges, the Head of State asked the young students to come back.