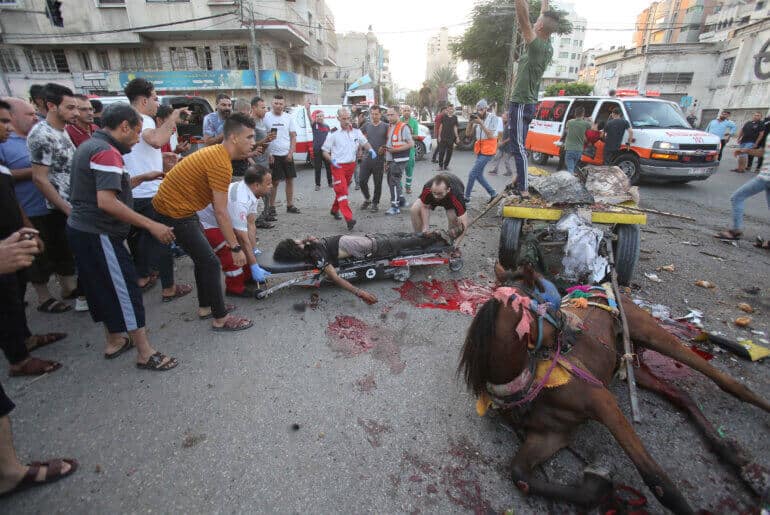 Israel’s onslaught on Gaza last week was shocking to many of us. It was unprovoked by any Palestinian attack and comprised three days of strikes on a captive, fenced-in population. Those strikes were aimed at the leadership of a militant group, Palestinian Islamic Jihad, and killed and injured many children.

This understanding of the attack is widespread in social media and in the Palestinian solidarity community. We have all seen the photos of Palestinian children killed by the assault. And it is obvious that one motive for the attack was the need of the new Israeli prime minister— a former TV host who had a desk job in the army–to demonstrate that he too can mete out violence to Palestinians.

That understanding has largely escaped the mainstream press. Though NPR did a report on the “harrowing stories” of children trapped in the Strip as the bombs fell, The New York Times has avoided the political angle and is yet to put the faces of the Palestinian children killed on its front page, as it did for 66 children in May 2021.

Indeed, Israelis have been gloating over the success of the attack. “Israel enjoyed 55 hours of almost side-to-side international legitimacy,” Avital Leibovich of the American Jewish Committee crowed in a briefing aimed at American Jews. She said the world was too distracted by other news, including economic issues in the U.S., to pay much attention to Gaza. “The attention of the media which at the end of the day is the tool that allocates information to the public, to the world, was not in Israel, was not in Gaza,” she said.

So much for the world. But what about Israel’s advocates who follow the issue as closely as we do and were put in the position of defending an unprovoked attack that killed children. How did they justify it?

Many ignored the facts. “We stand alongside #Israel in its right to self-defense against the direct threats to Israeli civilians posed by Palestinian Islamic Jihad,” the ADL said. The ADL’s ceo, Jonathan Greenblatt also ignored the fact that the attack was unprovoked: “As hundreds of rockets have rained down on Israeli civilians for the past 48+ hours, praying a cease fire will be reached soon and bring quiet and safety to all.” J Street’s statement also rationalized the onslaught by blaming PIJ–“Israel has a right to defend itself against a terrorist organization that has threatened Israeli lives.”

Others adopted a clinical approach to the killing of children. Michael Koplow at the Israel Policy Forum titled his post-mortem, “Proof of concept for a better Gaza policy,” and congratulated Israel on the attack without even saying how many children had been killed.

“[I]t is safe to say that it stands as one of Israel’s most successful confrontations in Gaza in the past 15 years. The IDF completed its military objectives of striking Palestinian Islamic Jihad’s top leadership and rocket facilities while limiting Palestinian civilian casualties, no Israeli civilians were killed despite over 1100 rockets fired by PIJ… It was a demonstration of impressive Israeli military and intelligence capabilities and responsible political decisions.”

“Essentially a bloodless praising of the operation that could have been written by a general or politician, all the while ignoring the moral context, which is horrific,” summarizes Robert Herbst.

Avital Leibovich’s briefing to the American Jewish Committee also said the attack was a giant win. Her justification of the preemptive nature of the attack sounded distant from Palestinian reality–like a Hollywood script, or an opinion on Facebook:

[T]he Palestinian Islamic Jihad actually planned some kind of deadly terror attack against Israeli targets… According to the Israeli intelligence, we understand that the Palestinian Islamic Jihad wanted to use a precise missile… in order to target probably a bus of people, maybe a bus of soldiers, maybe a bus of workers in the area, or anything of that sort, and that’s why Israel decided … to preemptively strike the PIJ and prevent this attack, and by doing so by the way also restraining other terror organizations in Gaza…

Leibovich was more lurid when she detailed Israeli fears of abduction of its citizens by Gaza militants.

One of the challenges we face in Israel is the issue of abduction. Those tunnels [from inside Gaza to the border]… their operational goal was to send a commando unit… to the Israeli side of the border, inside a village, and try to kidnap as many people as possible, in order then to kill them or negotiate for them, or both…”

One advocate was honest about the unprovoked nature of the attack. Daniel Gordis, an American emigre to Israel, wrote that it was right that Israel struck first because of the Jewish people’s history of sieges in which they have been expelled from the land.

Gordis said that it was a great thing that Israel attacked because of “what happened thousands of years ago” in Jewish history.

Gordis said that Jewish critics of the attack in the United States, including IfNotNow and Jewish Voice for Peace, are just sanctifying Jewish “victimhood.” Because if Israel doesn’t kill, Gordis said, Jews will be thrown off of walls as in ancient times or consigned to gas chambers.

For what would constitute moral Jewish action in the eyes of today’s worshippers of victimhood? Likely nothing less than Jews being tossed over the walls…

Because Israelis, even on the left, take Islamic Jihad’s warnings seriously. As a friend of mine commonly says to me, quoting his father who survived Auschwitz, “If you’re a Jew and your enemy threatens to kill you, believe him.”

Again, I don’t think that Gordis is reflecting the reality of the Israel/Palestine conflict of today when he invokes the Second Temple and the Holocaust. One side has all the firepower. The numbers of dead are very imbalanced.

Indeed, Israel has killed scores of Palestinian children since the beginning of this year. That is the terrible fact that all of these advocates must either paper over or seek to rationalize.