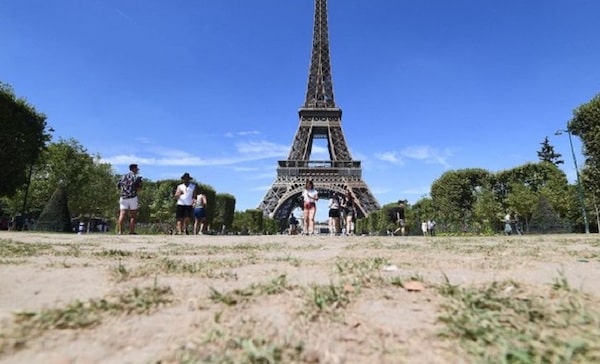 High temperatures and drought have deepened the energy crisis in Europe this summer, affecting electricity production at a time when the European economies are already facing unprecedentedly high oil and gas prices.

In France, Europe’s largest producer of nuclear power, several plants along the Rhone and Garonne were forced to reduce output because river temperatures were too high to cool the plants. This further reduced the power supply after the shutdown of a dozen of the country’s 56 nuclear plants for planned maintenance.

Nuclear power generation in France was 20.1 TWh in June, well below the 27.7 TWh recorded in the same month last year, according to the latest data released by French electricity transmission system operator RTE.

Hydro-power also received a tough blow. On average, France in July experienced a rainfall deficit of around 84 percent. As river and lake stock dropped to their lowest levels in more than 20 years, only 4 TWh of hydroelectricity were produced in June, the lowest level ever recorded for the same period.

Meanwhile, Electricite de France (EDF) reported in August that in the Rhone Valley, the Alps and the Cote d’Azur region, which account for more than 70 percent of the country’s hydropower capacity, hydroelectricity generation has fallen by 60 percent since January.

Europe is experiencing its worst drought in 500 years.

A staggering 64% of the European Union is experiencing drought warning or alert conditions, including much of England, Italy, Ireland, France, Spain, Germany, and many more countries. pic.twitter.com/BPguwBjVM2

The situation in Italy is no better. The north of Italy, host to the Po – the country’s longest river – as well as its main hydroelectric plants, is currently facing its worst drought in 70 years. The level of the Po went down by almost 50 percent compared to the average of previous years.

Enel energy company said that a plant near Piacenza, southeast of Milan, was shut down indefinitely in June, and most other hydroelectric plants are not operating at full capacity due to low levels on the Po that feeds them. From January to May, hydroelectricity production fell by about 40 percent compared to the same period last year, according to Utilitalia, the country’s federation of water companies.

Norway, Europe’s No.1 electricity exporter with a hydroelectricity output of 137.9 TWh last year, is preparing a framework for limiting electricity exports. Due to “half-empty” water reservoirs, hydroelectric power exports from Norway, which have been marketed as “the battery of Europe” and a major alternative to the absence of Russian gas, are falling short of this promise.

At the end of July, the level of filling in Norwegian water reservoirs was 67.9 percent, significantly lower than the corresponding 77.7 percent at the same time of year from 2002 to 2021. The lowest occupancy rate of 50.4 percent was seen in south-western Norway earlier this month, according to the Norwegian Water Resources and Energy Directorate (NVE).

In an attempt to address the worsening situation of high prices affecting local consumers, Norwegian oil and energy minister Terje Aasland said that the government was prepared to take additional action should the situation deteriorate. This action might involve either storage requirements for water reservoirs or export restrictions, or both.

Coal power production has also been affected in Germany as sinking Rhine waters have made shipping along the river harder. A local shipping company told the media that although it was still navigable, boats could only carry about a quarter of their capacity.

Dusseldorf-based Uniper, one of Germany’s largest energy supply companies, said two of its coal plants in the western part of Germany may see irregular operation until early September due to insecure coal supplies.

Falling production levels have driven prices up. In July, electricity prices in France and Germany were nearing record levels. In the first week of August, electricity futures for next year in Europe exceeded 550 euros per megawatt hour, compared to less than 100 euros a year ago.