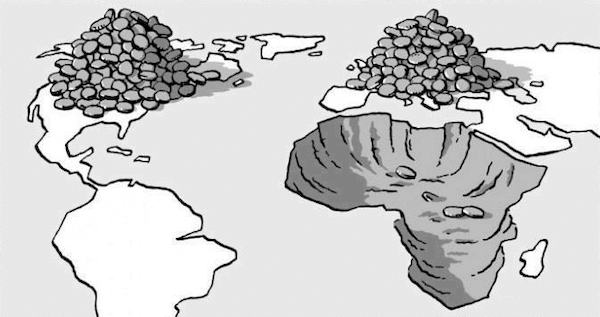 SYDNEY and KUALA LUMPUR. After four years of Trump’s ‘America first’ isolationism, U.S. President Joe Biden announced “America is back”. His White House has since tried to find allies against China and Russia.

But it has not found many, especially in the Global South. His summit with Southeast Asian leaders was well attended, but promised little. Worse, his Summit of the Americas revealed fading U.S. influence in its long-time backyard.

The latest U.S. Strategy Towards Sub-Saharan Africa (SSA) was expected to do better on the continent of Trump’s “shithole countries”. But it delivered little more than rhetoric. As with its Indo-Pacific Economic Framework for Prosperity, it is seen as “a hamburger without the beef”.

Biden’s strategy explicitly seeks to “counter harmful activities” by China and Russia, and “to expose and highlight the risks of negative PRC and Russian activities in Africa”. But it offers no evidence of such threats.

It asserts China “sees the region as an important arena to challenge the rules-based international order, advance its own narrow commercial and geopolitical interests, undermine transparency and openness”.

Similarly, it insists “Russia views the region as a permissive environment for parastatals and private military companies, often fomenting instability for strategic and financial benefit.”

Presenting Biden’s SSA strategy in South Africa (SA), U.S. Secretary of State Anthony Blinken claimed, “Our commitment to a stronger partnership with Africa is not about trying to outdo anyone else”. He emphasized, “our purpose is not to say you have to choose”.

While “glad” the U.S. was not forcing Africa to choose, SA foreign minister Naledi Pandor reminded the Blinken mission no African country can be “bullied” or threatened thus: “either you choose this or else.” The host also reminded her guests of the plight of the Palestinian people and life under apartheid.

Visiting Rwanda just before Blinken’s announcement, U.S. Ambassador to the United Nations Linda Thomas-Greenfield had threatened, “Africa could face consequences if they trade in U.S.-sanctioned commodities”.

Pandor described the U.S. Congressional bill, ‘Countering Malign Russian Activities in Africa Act’ as “offensive legislation”. The bill, the 2021 Strategic Competition Act and the U.S. Innovation and Competition Act have all been criticized by Africans, including governments, as “Cold War-esque”.

Calling for diplomacy, not war, Pandor urged, “African countries that wish to relate to China, let them do so, whatever the particular form of relationships would be.”

After all, the 2005 G7 Gleneagles Summit promise–to double aid by 2010, with $50bn yearly for Africa–remains unfulfilled. Actual aid has been woefully short, with no transparent reporting or accountability.

Over half a century ago, rich nations promised 0.7% of their national income in development aid. The U.S. has long ranked lowest among the G7, spending only 0.18% in 2021. Worse, U.S. aid effectiveness is worst among the world’s 27 wealthiest nations.

Meanwhile, rich countries have fallen far short of their 2009 pledges to provide $100bn in climate finance annually until 2020 to help developing countries adapt to and mitigate global warming.

After his stillborn Build Back Better World initiative, many doubt how much Congress will approve, and what will be for SSA. Likewise, before mid-2021, the Biden administration promised support for pandemic containment.

But it did not support developing countries’ request to the World Trade Organization (WTO) for a temporary waiver of related patents. The June 2022 WTO compromise was nothing less than “shameful”.

Supplies of Covid pandemic needs from China and Russia have been decried as “vaccine diplomacy”. Sanctions against Russia have disrupted contracted delivery of 110 million doses of its vaccine. This jeopardizes UNICEF efforts to vaccinate many countries, including Zambia, Uganda, Somalia and Nigeria.

The SSA strategy paper highlights U.S.-Africa HIV-AIDS partnerships. But it is silent about Big Pharma getting a U.S. sanctions threat against SA for producing generic HIV-AIDS drugs. The U.S. only backed down after a worldwide backlash as Nelson Mandela stood firm.

Biden’s SSA strategy promises to “engage with African partners to expose and highlight the risks of negative PRC and Russian activities in Africa” in line with the U.S. 2022 National Defense Strategy.

But it ignores why Africa remains underdeveloped and poor. After all, Africa has around 30% of the world’s known mineral reserves, and 60% of its arable land. Yet, 33 of its 54 nations are deemed least developed countries.

Together, they controlled over a trillion dollars’ worth, while $192 billion is drained yearly from Africa via profit transfers and tax dodging by foreign companies.

France retains control of its former colonies’ monetary systems, requiring them to deposit foreign exchange reserves with the French Treasury. It has never hesitated to topple ‘unfriendly’ governments through coups and its military.

Recently, the U.S. promised to continue providing intelligence, surveillance and reconnaissance support on Africa to France, using its advanced drone and satellite technology.

As ex-colonial powers continue to control and exploit SSA, policies imposed by donors, the International Monetary Fund and multilateral development banks have ensured its continuing underdevelopment and impoverishment.

Many Africans have suffered much due to colonialism, racism, apartheid and other oppressions. Pan-Africanism contributed much to the non-aligned movement during the old Cold War. Julius Nyerere famously declared in 1965, “We will not allow our friends to choose our enemies”.

Half a century later, Mandela reminded the West not to presume its “enemies should be our enemies”. Older Africans still remember the former Soviet Union and China for their support through past struggles, when most of the West remained on the wrong side of history.

Africans are correctly wary of the new “Greeks bearing gifts” and promises. While most do not want a new Cold War, many see China and Russia offering more tangible benefits. Unsurprisingly, 25 of Africa’s 54 states did not support the March 2022 UN General Assembly resolution condemning Russia’s invasion of Ukraine.

Out of Africa: Rich continent, poor people. 3 May 2022. www.ipsnews.net