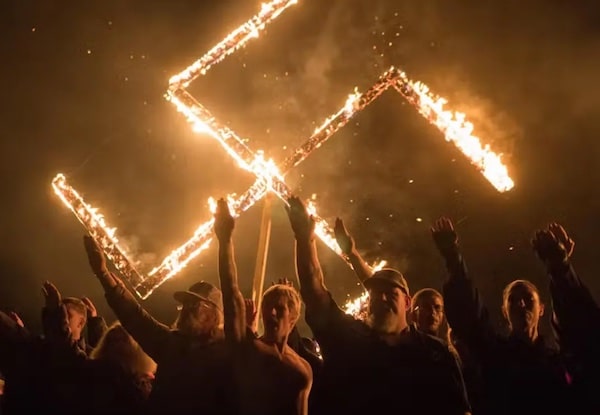 Nazis congregate on Google Plus 2019.

A U.S. state department sponsored round table on ‘countering disinformation’ was recently held at the National Security and Defence Council of Ukraine.

According to the press release – “NGOs, mass media and international experts” took part in the round table discussions. Delegates discussed ‘disinformation methods’ used in Ukraine and abroad. On the agenda was legal and state prevention of ‘fakes and disinformation in the context of cyber security’.

It goes without saying that the crushing of dissent is essential for public support for NATO’s proxy war in Ukraine to be maintained. Russian media has already been wiped from the Western-controlled internet sphere. Ukrainian ‘kill lists’ such as the infamous Myrotvorets already include the courageous Canadian independent journalist Eva Bartlett and outspoken Pink Floyd co-founder Roger Waters.

Bartlett was also doxxed on Twitter by former UK Conservative Party MP Louise Mensch who alerted Ukrainian Special Forces to her presence in Donetsk. A few days later an attack was carried out on the hotel in Donetsk housing multiple journalists including Bartlett – coincidence?

German journalist Alina Lipp has been effectively sanctioned and threatened with prosecution by the German government for reporting on the daily atrocities committed by Ukrainian Nazi forces against civilians in Donetsk and Lughansk. Lipp told Stalkerzone:

They just closed my bank account. Then they closed my father’s account. A month ago, I noticed that all the money disappeared from my account – 1,600 euros. I realised that something was happening in Germany. A few days ago, I received a notification from the prosecutor’s office, and a criminal case was opened against me for supporting the special operation. In Germany, special operations are considered a crime, and I am also a criminal. I face three years in prison or a huge fine.

British journalist Graham Philips has illegally been sanctioned by the UK regime without any investigation or Philips being given a ‘right to reply’. Most mainstream media reports on this violation of his human rights describe Philips as ‘one of the most prominent pro-Kremlin online conspiracy theorists’. A familiar smear deployed by NATO-aligned media outlets to dehumanise and discredit challenging voices.

Philips like many other journalists being targeted lives in Donbass which has been threatened with brutal ethnic cleansing by the NATO proxy Ukrainian Nazi and ultra-nationalist forces since Washington’s Victoria Nuland- engineered coup in 2014.

These journalists transmit the voices of the Russian-speaking Ukrainians who have been subjected to horrendous war crimes, torture, detention and persecution for eight years and ignored by the West. For this they are now to be designated ‘information terrorists’ – because they expose terrorism sanctioned by NATO member states.

Organisations are springing up in the UK like Molfar Global whose ‘Book of Orcs’ project employs 200 alleged volunteers to identify ‘Russian (Orcs) war criminals’ and to compile a legal ‘kill list’. The ‘Orc’ terminology is another dehumanisation process, converting Russian citizens and military into fantasy science fiction monsters to soften western publics to the measures being taken to silence and punish them for…being Russian or speaking Russian. They state on their website homepage:

Every Russian occupier must be identified and punished according to the law. War crimes and and crimes against Humanity have no statute of limitations. That is why we set ourselves the goal of finding everyone and preventing them from escaping justice

Who determines who should be put on the list? Who determines their fate? What justice? In a country like Ukraine seeped in corruption – where executions or the disappearance of dissidents and political or media opposition is a regular occurrence – who is to be made accountable for action taken against those listed on the ‘Orc hit list’? This is lawless justice that falls under the umbrella of U.S. “rules based global governance” – comply or die and newly furnished legislation will make your death or state-sanctioned assassination a legal one.

The organisers of the round table were the National Security Service Academy, the U.S. State Department/Department of Defence-funded Civilian Research and Development Fund (CRDF Global Urkaine), the International Academy of Information, the U.S. state department-linked National Cyber Security Cluster.

The tentacles of U.S. and UK dominated intelligence agencies are spreading further and deeper into society trying to strangle kick back against their respective regime oppressive domestic policies and foreign policy perpetual war objectives. We are all under attack, we are all facing the same fate as Julian Assange if we do not break the cycle and start to fight back.

If you oppose imperialist wars, racism, Nazism, terrorism, violent extremism, global health tyranny, technocratic supremacy, predator class elitism and pharmaceutical-controlled Eugenics- you are a ‘terrorist’. We are all ‘terrorists’.