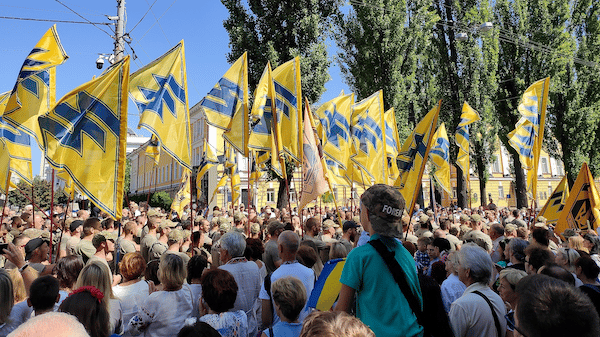 Photo via Goo3 on Wikimedia Commons, licensed under CC BY-SA 4.0.

Earlier this month, The Globe and Mail published a story profiling the wife of an Azov Regiment colonel, who denied that the group is made up of neo-Nazis. Instead, she insisted it’s “the most motivated, most patriotic unit in Ukraine.” The story offered no real pushback against that claim, and effectively amounted to a piece of outright neo-Nazi propaganda, despite whatever intentions the reporter may have had.

Unfortunately, the piece wasn’t entirely unique, and is merely part of a broader trend in Canadian media that has seen major outlets downplay or openly deny the fascist group’s ideology. This wasn’t always the case–at least not to the same extent.

In order to get a better sense of how Canadian media’s approach to reporting on the Azov Regiment (formerly the Azov Battalion) has changed over the years, we searched for every mention of the group in the archives of the Toronto Star, Globe and Mail, and National Post. We also searched through the CBC News website, as well as some of their broadcasts. All of the 90 unique mentions we found (as of August 10) were compiled, with the description of Azov provided in said article or broadcast being noted for comparison.

We found that these news outlets (and the wire services much of their coverage relied upon) went from directly acknowledging Azov’s neo-Nazi ideology to suggesting that the group is merely “controversial” or has a “checkered past.” Some reports included no qualifiers at all, and simply presented the group as just another Ukrainian military unit fighting against Russia.

Here’s a timeline of how the reporting shifted over the years, followed by an interview with an expert who claims this shift is not due to any change within Azov, but rather out of political convenience for Western forces.

The earliest mention of the Azov Battalion in the publications we searched that we found came in September 2014. From then until the start of Russia’s invasion of Ukraine, nearly all mentions of the group were accompanied by descriptors that accurately captured what they are. These descriptors included: “Ukrainian fascist group”; “ultra-nationalist white supremacist paramilitary regiment”; “a pro-Ukrainian group with nakedly neo-Nazi sympathies and symbols”; “far-right Ukrainian group.”

In February, Russian President Vladimir Putin sought to justify the invasion of Ukraine in part by claiming it needed to be de-nazified. Understandably, some media reports took care not to uncritically repeat Russia’s narrative. However, even in the early stages of Russia’s invasion–when public and official outrage at Russia’s actions, and eagerness to avoid reporting information that complicated anything but unconditional support for arming Ukraine, were arguably at their peak–these news outlets still managed to acknowledge Azov’s neo-Nazism, with no suggestion that this was a feature consigned to the group’s past.

In March, The Globe and Mail published two opinion articles that referred to the group as a “neo-Nazi regiment” and an “overtly extreme-right faction,” respectively. Also that month, the National Post reported that Azov “has openly neo-Nazi sympathies, with members often seen posing with swastikas or photos of Adolf Hitler.” In April, news and opinion pieces from the Toronto Star variously called Azov “far-right-affiliated,” “ultranationalist” and “unabashedly fascist.” And podcast and video descriptions at the CBC referred to it as a “far-right” group.

But then, starting in early May, things changed.

That month, CBC News published an Associated Press (AP) story describing Azov Regiment as having “originated as a far-right paramilitary unit” (emphasis ours).

The National Post published a pair of opinion pieces by a columnist that noted the Azov Regiment “has previously described itself as pro-Nazi,” and called it “problematic” and “controversial,” while stressing the group’s relatively small size. A news article merely described Azov as “one of two units still resisting the Russians in Mariupol,” and cited an “anti-Kremlin” activist who claimed the unit has “moved beyond” its far-right politics.

During the same period, the Toronto Star relied almost exclusively on AP wire stories, which either included no qualifiers of the group at all, or described it as having “far-right origins.” One of the two original stories that the Star did publishsaid Azov has “been accused of holding white supremacist and neo-Nazi views.” The second Star story included no qualifiers.

Meanwhile, echoing language used in several wire stories, a Globe piece described Azov as having “far-right roots,” but claimed that it has been “increasing[ly] depoliticized in recent years.” Two other Globe articles, along with a dozen or so Reuters and AP reports, included no qualifying descriptions of the unit at all.

As a whole, these news outlets either offered no description of Azov, or claimed that it was far-right in the past but had since evolved. That trend has continued since May, for example with an August broadcast from CBC’s The National referring to the unit as having a “controversial past,” and the August article from The Globe and Mail mentioned in the introduction to this piece claiming it “has a history of far-right leanings but is now part of the Ukrainian army.”

So, what happened? Why did descriptions of the Azov Regiment go from almost unanimously consisting of some mention of neo-Nazi ideology to portraying the group as being just like any other unit fighting Russia?

Some argue that the group has changed and been deradicalized in recent years. As such, they claim that calling the Azov Regiment a neo-Nazi group is no longer accurate. But Ivan Katchanovski, a political science professor at the University of Ottawa specializing in Russia, Ukraine and armed conflicts, told Passage that these sorts of claims are inaccurate.

Katchanovski noted that despite formal changes to Azov’s structure when it became a part of Ukraine’s National Guard, it remains dominated by neo-Nazis. He noted that the armed group also has an affiliated civilian wing, called the National Corps, a neo-Nazi political organization led by Azov’s first commander, Andriy Biletsky. “Before the Russian invasion, they were very active in a variety of attacks, including attacks on Roma and attacks on the presidential administration of [Volodymyr] Zelensky,” Katchanovski explained. He added that Azov Regiment has also been involved in setting up other Nazi-led units.

So, again, why the change? Katchanovski is blunt in his assessment:

This is a political change. It’s not based on facts. Media coverage is often driven by political considerations, and not what actually happens on the ground.

The political consideration at play here for the war in general is that it’s damaging to Western interests to point out these countries are supporting neo-Nazi formations such as Azov, as well as other less well-known armed far-right groups. More specifically, in May, a major event in the war took place: the battle at the Azovstal steel plant. This battle, which lasted for weeks, saw the Russians fight against Ukrainian forces made up almost entirely of members of the Azov Regiment. This battle was dominating Western news coverage, and is also the period where news reports published in Canadian media began to soften descriptions of the fascist unit. This has resulted in misleading news coverage.

Katchanovski adds that, “This is also going to have a dangerous effect on Ukraine and potentially other countries because now, basically, Nazis in Ukraine are made into national heroes.” He also noted that Azov (as well as Western governments) has consistently pressured Zelensky–including with threats, and even before Russia invaded–not to seek a peace deal with Russia or withdraw forces from the Donbas region. In February, Azov branded Zelensky a “servant of the Russian people” after he suggested that he might negotiate with Moscow.

Katchanovski said that the valorization of the Azov Regiment is comparable to how the West initially supported the predecessors of the Taliban in their fight against the Soviet Union’s intervention in the war in Afghanistan in the 1980s, and also risks inspiring yet more far-right activists from other countries to join the conflict in Ukraine in order to gain military experience, potentially causing a blowback effect if they make it home.

While the Kremlin’s framing of Ukraine as a Nazi state is false, Katchanovski said, Western governments and media have gone in the opposite direction:

They’ve started to deny any presence of neo-Nazis.

The shameless shift toward sympathetic coverage of the Azov Regiment is another useful reminder that Canadian media are perfectly happy to valorize anyone, including Nazis, so long as doing so serves the West’s interests. These media outlets should be continuously reminded of their coddling of fascists, including if and when the grim consequences of it play out over the coming years in blowback.