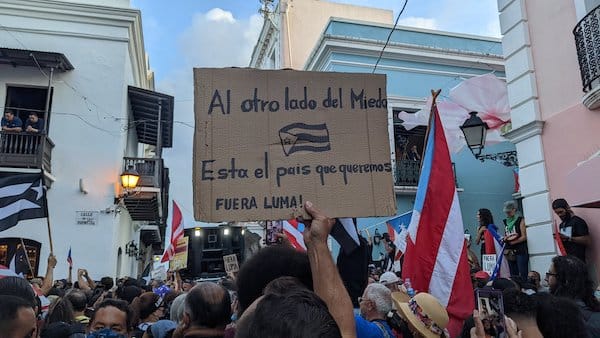 On August 25, thousands of Puerto Ricans took to the streets in the capital San Juan against Canadian-American LUMA Energy company. (Photo: Bandera Roja/Twitter)

On Wednesday, August 31, a large demonstration was organized in Puerto Rico’s capital San Juan, demanding cancellation of the contract with Canadian-American electricity transmission and distribution company, LUMA Energy. The Jornada Se Acabaron Las Promesas social movement, which organized the protest, also demanded the withdrawal of the island’s Financial Oversight Board, and the resignation of Governor Pedro Rafael Pierluisi.

Early Wednesday morning, Jornada organized a peaceful roadblock with tires on a section of Luis Muñoz Rivera Avenue, in front of the Seaborne building where the offices of the Financial Oversight Board (JCF) and the Energy Bureau (NEPR) are located. They shouted slogans such as “Get out LUMA, get out Pierluisi, get out the Board.” A few hours later, the police moved in to clear the protesters from the road, violently arresting twelve of them.

The arrested protesters were taken to the Hato Rey West police station. The movement, through its Facebook account, claimed that the lawyers of the arrested members were barred from meeting with their clients, and condemned the police for violating the right to legal representation. The group called on Puerto Ricans to mobilize against the illegal arrests.

The protest was the latest in the series of demonstrations that began last week against LUMA Energy. On August 25, 26 and 27, thousands of Puerto Ricans took to the streets of San Juan, demanding termination of the contract signed between the state Electric Power Authority (PREPA) and LUMA Energy, over constant power blackouts and repeated increases in the electricity bill.

Protesters argued that since LUMA began operating in Puerto Rico, on June 1, 2021, the electricity services have worsened and outages have increased due to lack of maintenance, while power rates have hiked at least seven times in a year.

Reportedly, in recent weeks, Puerto Ricans have been experiencing prolonged power outages at least twice a week, in addition to voltage dips multiple times a week. The blackouts have damaged appliances that in turn have sparked fires, which destroyed homes. A family recently lost their home after a generator exploded as they attempted to start it during a blackout. Multiple hospitals have been left in darkness after their generators malfunctioned.

People on the streets have demanded that the PREPA re-assume full control of the electric power system, and gradually move toward a renewable electricity system.

In addition, the protesters also demanded dissolution of the Financial Oversight Board in the wake of the implementation of numerous anti-people policies since its establishment six years ago. They also called for Governor Pierluisi’s resignation, arguing that he has been supporting the neoliberal measures, ignoring the urgent needs of the citizens, since his election last year. They also condemned him for repeatedly defending LUMA.

Citizens denounced that since the establishment of the board in 2016, under the US federal law PROMESA (Puerto Rico Oversight, Management, and Economic Stability Act), the cost of water, food, and tolls have risen sharply. The people decried the privatization of the University of Puerto Rico, highways, beaches, and other assets of the country. They also criticized the housing shortage due to overvaluation and displacement of communities to favor tourism. Puerto Ricans condemned the increase in corruption under the Pierluisi administration.

Slogans chanted since on the streets include “the contract is a robbery, it is the people who pay for the robbery,” “get out LUMA, get out Pierluisi,” “LUMA is the worst for the working class people” and “there will be no peace if LUMA doesn’t leave.”

“We hold the governor, the Financial Oversight Board, the Energy Bureau and the US government accountable for the energy crisis that the island is going through. More than a year ago, it was warned that the LUMA contract would trigger a terrible social, humanitarian and economic crisis. Today, the blackouts and the incapacity of this company are our daily bread,” said Jocelyn Velázquez, the spokesperson of Jornada.

Velázquez called on the people to continue mobilizing. “We must take to the streets en masse so that the system understands that it is time to back down. That contract must be canceled and the displaced PREPA employees must return to their jobs to repair the mess caused by LUMA,” he said.

On August 27, a group of 30 people associated with Jornada organized a cacerolazo against the private energy consortium in the Plaza Las Américas shopping center. A cacerolazo is a kind of protest in which people call attention by banging pots, pans, and other utensils. In the afternoon, over two hundred citizens gathered on Fortaleza street to continue the peaceful protests, demanding better electricity service and corruption-free governance. In the late evening, protesters held another cacerolazo. At around 10 pm, the situation had become tense when the police arrested a 16-year-old minor, violently dragging him by his legs after he jumped past the barricades they had erected.

Cops just did a shift change with seemingly less cops this time pic.twitter.com/XncGL0hj2z

On August 25, the police violently repressed the protesters, who marched to the governor’s office, La Fortaleza, to express their rejection of the inconveniences caused due to the chronic interruptions in the electricity service. The agents fired tear gas and pepper spray at the protesters and attacked them with batons in order to disperse them.

According to reports from Latino Rebels, on the night of August 25, in addition to several protesters, at least four other journalists were also attacked by police despite being duly identified as press. According to a police press conference on Friday, four people were arrested at the protest.

In the video below, you can see the moment when @PRPDNoticias agent uses pepper spray against protesters and journalists. You can see him point directly at me and my phone. pic.twitter.com/GLGuCQNSG0

On August 25, thousands of citizens, including famous artists, environmentalists, political leaders, social activists,students, teachers, and workers from across sectors peacefully demonstrated on Fortaleza street in old San Juan. They held a cacerolazo, sang and danced, calling on the government to heed their demands.

Despite the repression on Thursday night, hundreds of people continued demonstrating on Fortaleza street for the next two days.