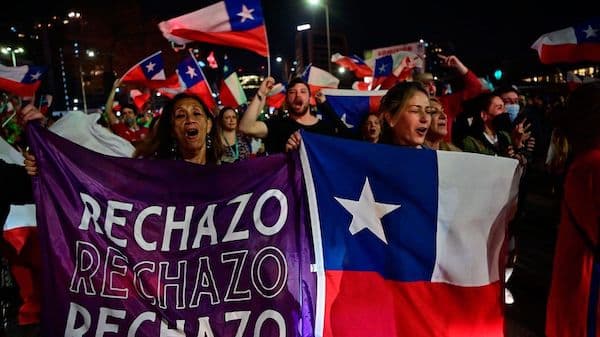 The Chilean people demonstrated at the ballot box against the proposal of the new Constitution of Chile, with an unappealable result, according to the final official bulletin of the Electoral Service of Chile (Servel) with a 62% rejection of the constitutional project against a 38% of approval; the vote was mandatory, hence the participation has exceeded 13 million voters.

The last mobilizations in favor of the yes “Apruebo” vote, including a large demonstration in Santiago on the eve of the referendum, were not enough to avoid the announced defeat; for almost a month the polls indicated a majority opposition to the constitutional text.

Reasons for the defeat

There is no doubt that the reasons for the defeat are many, being unbelievable that it occurred despite the fact that Chilean men and women had widely approved the process that led to the drafting of the text. Probably the main mistake of the constituent assembly was to want to do too much in the sense of giving Chile the most progressive constitution in the world.

After eighteen months of often confusing debates, the 155 constituent convention members (78 men and 77 women, with 17 seats reserved for indigenous peoples) produced an extremely complex text of 178 pages and 388 articles. The new Magna Carta redefined in its fundamental principles (Art. 1-16) the character of the State, reconfiguring its plurinational dimension, strengthening its social role, the explicit defense of democratic institutions and human rights (Art. 17-126), as well as the civil service and the fiscal system (Art. 165-186). While confirming the presidential system, it consolidated the balance of power mechanisms (Art. 251-306) and the guarantees of political participation (Art. 151-164). In addition, a series of innovative elements were introduced, from gender equality to the right to abortion, the recognition of indigenous peoples to territorial and regional reorganization, including the value of ecological responsibility (Art. 127-150) assigning rights to nature.

But all these points of strength of the new Constitution have perhaps turned it into its greatest weakness, being considered, according to the polls prior to the vote, too radical for many, which encouraged polarization within the Chilean people. Thus the “rejectionist” camp was compacted into a heterogeneous coalition of forces, each of which opposed a part of the new constitution. It also used one of the infallible tools “disinformation”, which we know has historically been one of the weapons that has given electoral victories to the right wing. However, it is necessary to point out that to some extent the complexity of the new constitutional text also made it difficult to orient the population towards its approval.

The ambitious revolutionary proposal of the project was summarized in Article 1, Chapter I, Principles and General Provisions of the text of the new constitution which proclaimed:

Article 1. (1) It is plurinational, intercultural, regional and ecological. (2) It is constituted as a republic of solidarity. Its democracy is inclusive and parity. It recognizes as intrinsic and inalienable values the dignity, freedom, substantive equality of human beings and their indissoluble relationship with nature. (3) The protection and guarantee of individual and collective human rights are the foundation of the State and guide all its activities. It is the duty of the State to generate the necessary conditions and provide the goods and services to ensure the equal enjoyment of rights and the integration of people in the political, economic, social and cultural life for their full development.

This recognition of the “plurinational state” provoked protests from the Chilean extreme right, sensitive to the defense of the nationalist system and concerned about the reorganization of territorial systems and the prerogatives assigned to indigenous peoples. It may come as a surprise that the rights of native peoples was one of the main points of contention, following the election of an academic, linguist and defender of the rights of Mapuche indigenous peoples, Elisa Loncon, as president of the National Constituent Convention, a position subsequently occupied by María Elisa Quinteros Cáceres, academic and researcher at the Department of Public Health of the University of Talca. Did that 13% that make up the Chilean indigenous peoples aspire to much? We cannot determine that, but what we can say is that some discriminatory roots are still present in the Chilean population.

This defeat is not only a hard blow to the indigenous peoples, to the defenders of social rights, to women, but also to the ecologists of the world who were waiting for the approval of a constitutional text that for the first time would legally recognize the right to a healthy environment, with norms to avoid the wild extraction of copper and lithium, and protect the fresh water reserves and defend the glaciers from climate change.

Starting from scratch or what to do?

This September 5, President Boric will gather Chile’s political parties at the Palacio de la Moneda to decide how to proceed; the supporters of the “yes” vote had declared that in case of failure, the process would be restarted from scratch, with the election of a new Constituent Assembly. Another less ambitious solution put on the table by some experts is the possibility of modifying the current Constitution, inserting new rights, even if this means continuing to live with a text whose hard core was approved in 1980 under the dictatorial Pinochet regime.

It has been proven that Chile is a political laboratory for reactionary forces, it was so before and during the coup d’état to President Salvador Allende, whose model to overthrow progressive governments has been applied in almost the same way in other nations; it was also experimented in the development of the Pinochet dictatorship, with liberal economists working for the regime; and it was again after the handling of the social outburst of 2019.

For the forces of the left, multiple lessons can be drawn from this failure of the constitutional reform, which will surely be carried out by expert analysts, but on the one hand, it is possible to reflect on the right wing’s communication management, the mechanisms that can raise the level of real political participation of the ordinary people in the elaboration of the constitutional text and perhaps something that was decisive, the determination of the speed with which radical changes can be established in a divided society.