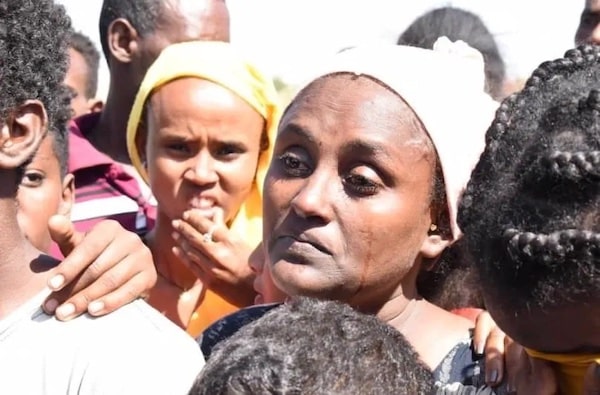 They started the war in November 2020, were forced to retreat just over a year later, but not content with the level of human suffering resulting from their initial barbarism, they are, it seems, determined to kill and kill again; to rape and beat their Ethiopian brethren; to once more destroy property, burn farmland, slaughter livestock, sending fear through communities, deepening the pain of a nation in their frenzied quest for power.

This latest offensive was launched on 24 August, violating the humanitarian truce agreed with the Ethiopian government, and shattering the temporary peace. A Government statement relayed that,

Ignoring all of the peace alternatives presented by the government, the terrorist group TPLF…. continued its recent provocations and launched an attack this morning at 5 am (0200 GMT)

The TPLF used the months of peace, not to enter unto constructive dialogue with the government, to address the needs of people in Tigray impacted by the war and beg for forgiveness, but to actively re-arm and rebuild its forces. The Crisis Group relate that they have “solid evidence” of at least 10 Antonov planes making deliveries (of arms it is assumed) “to two airports in Tigray,” almost certainly from Sudan. One such aircraft, en route from Sudan and loaded with weapons, was recently shot down by the Ethiopian air force.

The government has known about these aerial shipments for some time, but failed to clamp down on them. This lack of decisive action, particularly in relation to law and order issues has been a feature of the Abiy premiership, and is something that needs to change.

Whilst TPLF thugs lit the fuse of renewed conflict in Tigray’s southern border, other misguided fighters, many little more than children, raided a World Food Program (WFP) warehouse in Mekelle (capital of Tigray region). “12 full fuel tankers with 570,000 litres of fuel” were taken, and UN staff detained, reported, Stephane Dujarric, chief spokesman for UN Secretary-General Antonio Guterres. “These fuel stocks were to be used solely for humanitarian purposes, for the distribution of food, fertilizer and other emergency relief items. This loss of fuel will impact humanitarian operations supporting communities in all of northern Ethiopia.”

Stealing from the UN to enable war is nothing new for the TPLF; From July-September 2021 the WFP state that, “445 contracted non-WFP trucks entered Tigray, but only 38 ….returned,”—407 were stolen by the TPLF. The lack of vehicles the agency said, was “the primary impediment to ramping up the humanitarian response” within Tigray. The inability of UN agencies to deliver humanitarian aid is of no concern whatsoever to the TPLF leadership, who care not a jot for the people of Tigray, and even less for other ethnic groups throughout Ethiopia.

Alongside the declaration of a humanitarian truce, the March 24 agreement initiated by the Government, allowed for unfettered humanitarian access to Tigray, and created a platform for peace talks. But the TPLF do not want peace, have never wanted peace and have no intention of working for it. They failed to engage with the Main Peace Committee—established to “peacefully resolve the conflict in the northern part of the country”, or the National Dialogue Commission, set up by the government on 29 December 2021, to“ facilitate “inclusive dialogue on national issues for the creation of national consensus and establishment of common grounds.” From the beginning of the conflict the government has repeatedly looked for a peaceful resolution, but the TPLF have erected obstacle after excuse after condition to scupper any progress; for its part the government has consistently said it will talk to TPLF representatives anytime, “without precondition, at any venue.”

This accommodating approach, however, is wasted on the TPLF: their aim is clear, to fracture Ethiopia, inject discord, hopefully overthrow the government (with western nations’ support)—the first government to be democratically elected by the way—and regain power. They will fail totally; they are hated and despised throughout the country (including within Tigray) and by Ethiopians and friends of Ethiopia everywhere, and with every Ethiopian that they kill, rape and abuse that hate deepens a little further.

The TPLF have been a malignant force in Ethiopia for decades. They dominated the previous EPRDF government (a coalition in name only) for 27 years (1991-2018), stealing election after election. Ruling through fear, enflaming division, agitating ethnic disagreements, violently crushing human rights and committing state terrorism in various parts of Ethiopia. Throughout their time in office and since their overthrow Western powers, to the bewilderment of many, have consistently supported them. Perhaps unsurprisingly, given their addiction to regional meddling, the main sponsor of TPLF terror is the U.S. government. Successive administrations, together with the UK, and to a lesser degree the European Union, have backed the TPLF, empowering them financially, politically, and throughout their war on the Ethiopian State, it is widely believed, militarily.

With western political support and lasting TPLF influence in Washington, London, New York and Geneva, has come media collusion. CNN, BBC, Al Jazeera, The Guardian, New York Times etc, all have been guilty of mis/dis-information; biased or just poorly researched stories ranging from outright lies to nauseating bothsidesism as with Voice of America (VOA) reporting of the recent theft of WFP fuel by TPLF fighters, witnessed by UN staff. VOA state that Tigrayan forces are condemned for “allegedly stealing” the fuel: allegedly!

The extent to which western politicians were, and given the recent attacks, appear to remain, involved in the TPLF’s terror war was revealed by a video that was leaked in November 2021. The footage shows a Zoom meeting between Berhane Gebre-Christos, referred to as “a “chief representative of the TPLF,” and top U.S., UK and European Union diplomats with long-standing connections to Ethiopia, including U.S. Ambassador to Somalia Donald Yamamoto. The group reportedly celebrated the TPLF’s advance on Addis Ababa (which never actually transpired) and discussed how the TPLF could form a post-Abiy government.

It is geopolitics at its most ugly and menacing; these ex-colonial/imperialist political powers have no interest in seeing Ethiopians or indeed anyone in Sub-Saharan Africa prosper and are still trying to install puppet regimes wherever possible. As long as the TPLF continue to receive support from ‘foreign powers’ the terrorists will continue to wage war on the Ethiopian people. The ‘international community’, which equates in this case primarily to the U.S., needs to stop feeding the dogs of war and start compelling the TPLF, a cancer within the nation and the wider region, to engage meaningfully in peace talks with the government.

Graham Peebles is an independent writer and charity worker. He set up The Create Trust in 2005 and has run education projects in India, Sri Lanka, Palestine and Ethiopia where he lived for two years working with street children, under 18 commercial sex workers, and conducting teacher training programmes.