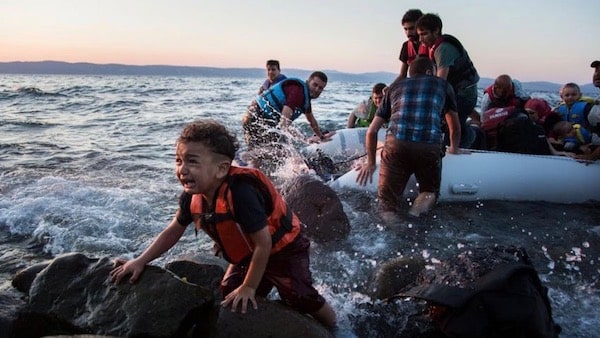 According to an Al-Jazeera report, around 60 refugees, mostly from Lebanon and Syria, stranded in the Mediterranean sea have not got any help from European coast guards for days despite distress calls and reports of at least three children among them dying. Instead, they are being watched from a container ship. Such reports of criminal insensitivity are not an aberration.

Every year, thousands of people die from drowning or go missing in the Mediterranean while trying to cross over to Europe from conflict-ridden, poor and developing nations in Asia and Africa.

The death of these people, most of them desperate to find safety and a better life given the social, economic and political distress in their own countries, can mainly be attributed to the illegal and inhuman immigration policies pursued by rich European countries who otherwise claim to be champions of human and refugee rights, like in the case of Ukraine. However, the EU continues to deny its role and blames only the victims.

Reacting to the EU’s migration policy, United Nations High Commissioner for Refugees Filippo Grandi recently said that he is not surprised. He called the EU’s policy of pushing back other refugees through “restricted legislations, barbed wire, naval blockades” while welcoming Ukrainians racism.

In 2020, a Guardian report held EU pushbacks as the reason for the death of over 2,000 refugees. The report pointed to illegal tactics of violence and intimidation including excessive beating, sometimes with metal rods, and physical abuse of “women and children” by the European Border and Coast Guard Agency (Frontex). In most of the cases, refugees remain stranded at sea in small overcrowded dinghies after violent pushbacks by the Frontex before dying due to drowning, dehydration, and hunger.

According to the UNHRC, the total number of refugee deaths in such cases reached over 3,000 in 2021. The figure for this year is already over 750. All these people have died or “gone missing” while trying to cross the Mediterranean sea.

According to the IOM’s missing migrant project, the Mediterranean accounts for almost half of all missing and dead migrants in the world since 2014 when it started collecting such data. 24,581 migrants (19,484 in the central Mediterranean alone) have died or are missing in the region, against the total dead or missing migrants figure of 50,087.

Frontex is facing several investigations inside the EU for violations of its own laws related to the treatment of asylum seekers. However, as per Guardian reports, it continues to enjoy strong support from EU officials.

The EU has also supported and financed external agencies, like the Libyan coast guard, in order to prevent the inflow of migrants/refugees, despite knowing their record of abuse and violations of basic human rights. The fact that Libyan authorities and informal militias have been involved in large-scale human trafficking of migrants using the chaos created by the war in the country is well known. Those who survive the pushback by EU authorities and end up in Libya often face torture, extortion of money from their families, and even death during their detention there.

It is clear that the abuses which migrants face cannot solely be blamed on Libyan coast guards or other smuggling groups. In fact, European reluctance to take in the refugees makes them vulnerable to abuse by such elements who use the migrants to make easy money. The suffering of migrants can be directly linked to the EU’s policies.

In 2020, at least 3.6% of the global population or around 281 million people were living as international migrants, according to the IOM. The number of migrants reaching Europe through the Mediterranean has seen steady growth recently. The number increased to 116,573 in 2021 from 88,143 in 2020, a 20% increase. This is still small when compared to migration within poorer countries and counters the myth and hype propagated by European countries of millions flooding their borders.

Globally, over 100 million people were forced to flee their homes due to conflicts in 2021 alone. This was more than the 89.3 million recorded in 2020. Most of these migrants still live in poorer countries in their own neighborhood.

However, only a small part of the entire migrant population has sought refuge in Europe. The reasons cited by global agencies for continued movement towards Europe from countries in Africa and Asia are political instability, armed conflict, persistent economic challenges, and climate-induced displacement.

European countries are directly or indirectly responsible for many of these crises. Most of the conflicts that drive refugee flows—like in Syria, Iraq, Afghanistan, and sub-Saharan and Northern Africa—have seen the direct or indirect involvement of European countries. The Western hand in colonial loot of Africa and elsewhere is beyond doubt.

Instead of disengaging from imperialist aggression, wars, and neocolonial loot of third world resources in order to reduce the burden on their governments and allow policies that can tackle popular distress, EU policymakers indulge in racist and murderous anti-immigration policies.

Recently, the UK signed a deal worth millions of dollars with Rwanda which would further deny relief to those who are seeking to escape suffering.

If it is really serious about its commitments to human rights, the EU needs to rethink “the concept of borders which is difficult to reconcile with the idea of universal human equality,” Laura Zanfrini, a professor of sociology at Catholic University in Milan, said in a UN conference last year.

fair and effective reception [of all migrants] is possible. We must be careful about a certain type of false nationalism that defends many isolated ‘me’.