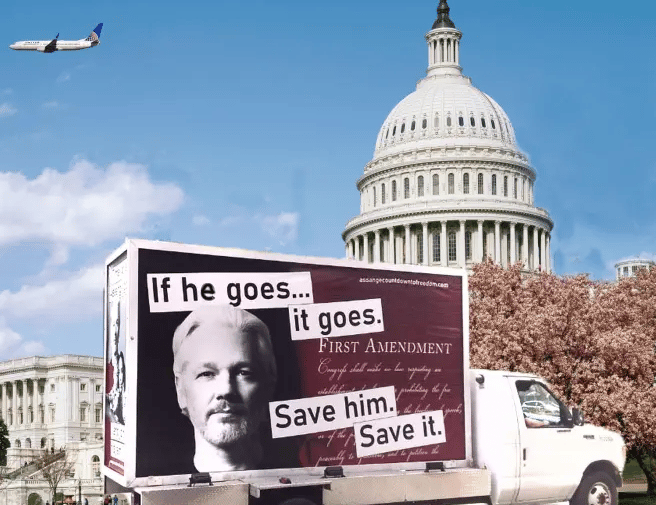 Two weeks ago CovertAction Magazine reported on the 15-foot-wide satirical billboards mounted on trucks and driven all over the nation’s capital to publicly shame the Justice Department and Democratic Party leaders for their illegal and immoral persecution of Julian Assange.

Randy Credico never dreamed that his personal “poke-in-the-eye” campaign against the Justice Department would catch on the way it has. He had started with just one truck and one driver for a few hours a day—which was all he could afford. But suddenly, after CovertAction Magazine broke the story and posted photos of Credico’s billboards popping up all over Washington D.C., other news organizations started covering the story.

Then activist journalists like John Pilger, Max Blumenthal, John Kiriakou and many others began writing about the billboard campaign, praising it for the hope it inspired in so many who fervently campaigned and prayed for Assange’s release.

John Pilger—”When people ask, ‘What can I do?’, my response is to point to the billboard campaign created by the ever-imaginative direct action of one man, Randy Credico.”

Stefania Maurizi—”We need people taking to the streets to protest against the horrific treatment of Julian Assange. The Billboard project does a valuable work.”

Gabriel Shipton (Julian Assange’s brother)—”A billboard cruising the streets of D.C. with pictures of imprisoned and murdered journalists? This brainchild of Randy Credico is a powerful in-your-face message to those who decide who lives or dies.”

John Kiriakou—”I don’t usually experience ‘joy’ when walking the streets of Washington D.C.. But joy is what I felt when I saw a truck urging support for Julian Assange. I first saw it on Capitol Hill in front of of the Senate office buildings—then later in Chinatown, outside the Capital Arena where Roger Waters was performing—and then again the next day at Farragut Square, arguably the most heavily trafficked place in all of D.C., I wasn’t the only one who saw it. Thousands of Washingtonians did. And if it made even one go home and research Julian’s case, it was worth it. I can’t wait to see that truck again.”

After that, the dam broke, as the thousands who follow those journalists began reposting and retweeting the billboard photos to their thousands of friends and followers on Facebook and Twitter.

As a result, many who may never have heard of Julian Assange were now, at least, aware of him. And some—or, hopefully, many—might even look him up on their computers and smart phones, and start wondering exactly what kind of justice our Justice Department was really pursuing.

To top it off, Roger Waters, founder of Pink Floyd and longtime Assange supporter, showed up at the August 17 street rally for Assange in front of the Justice Department and delivered a resounding thumbs up to Credico’s billboard campaign.

Waters also plans to deliver an ear-splitting, 100-decibel shoutout for Assange to more than 400,000 cheering fans during his “This Is Not a Drill” concert tour, a radical political rock extravaganza he is taking to more than 20 major U.S. and Canadian cities, including Washington D.C., New York City, Kansas City, Denver, Salt Lake City, Portland, Las Vegas, Dallas, San Francisco and Los Angeles, Montreal and Toronto.

Like those at Waters’ sold-out Washington D.C. concert on August 16 (which this writer attended), his fans around the country will hear songs such as “The Bravery of Being Out of Range,” accompanied by 30-foot-high video-wall images of U.S. presidents, with captions like (under Ronald Reagan), “War criminal—killed 30,000 innocents in Guatemala.” And under Barack Obama, “War criminal—normalized the use of drone strikes.” And finally, under Joe Biden, the caption, “War criminal—just getting started.”

The cascading publicity and media attention now focused on Credico’s mobile billboards have sparked an international fundraising campaign to “BUY A BILLBOARD FOR JULIAN.” Its intent is to keep Credico’s trucks rolling, and keep the pressure on Joe Biden, and on Attorney General Merrick Garland, day after day, until they cease their illegal persecution of Julian Assange.

Co-Founder of Ben & Jerry’s Ice Cream Pledges: “I’ll Match Each and Every Donation to the Julian Assange Mobile Billboard Campaign”

Ben Cohen, activist co-founder of Ben & Jerry’s Ice Cream, intends to make sure that the provocative giant billboards calling for Julian Assange’s freedom continue to roll up and down the streets of Washington DC.

In a recent message to Randy Credico (the radio journalist and political satirist who created the Julian Assange Mobile Billboard Campaign), Cohen pledged to match—not only the donations already given to the campaign—but also to personally match every new donation going forward.

Cohen urges, “If you haven’t given yet, please chip in what you can HERE to help FREE ASSANGE NOW—and I will double it.”

Credico’s brilliant idea for a mobile billboard campaign started small; it was his own one-man “shame-on-you” protest against the Biden Justice Department for its persecution of Julian Assange. But it soon went viral, inspiring donations from all over the world that have helped increase the frequency of the billboards.

They now show up and draw crowds at every iconic site in the nation’s capital—from the Department of Justice to the Washington Monument to the Capitol Building to the White House. Thousands of residents and visitors to the nation’s capital have seen them.

Ben Cohen is waiting to personally match your donation

Further, don’t let Ben’s generous offer go to waste. It costs a lot of money to keep trucks and drivers patrolling the streets of DC every day of the week with Julian Assange billboards. You can help keep them rolling by donating HERE. Ben Cohen will be delighted to match your donation.