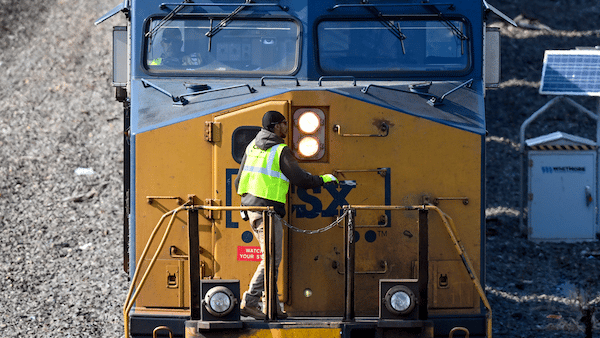 A locomotive stops to switch tracks before arriving at the Selkirk rail yard Sept. 14, 2022, in Selkirk, N.Y. (AP Photo/Hans Pennink)

As a major rail strike looms, rail executives have been reluctant to meet workers’ demands for better pay, benefits, and time off. At the same time, the CEOs of five of the largest railroad conglomerates have been paid more than $200 million in the last three years, and company shareholders have been boosted by nearly $200 billion in stock buybacks and dividends over the last dozen years.

A sixth railroad giant is controlled by billionaire Warren Buffett, whose net worth jumped 50 percent during the pandemic to $100.1 billion. Buffett earlier this year bragged to shareholders about huge earnings even after accounting for worker pay.

“Your railroad had record earnings of $6 billion in 2021,” he gushed in his annual letter. “Here, it should be noted, we are talking about the old-fashioned sort of earnings that we favor: a figure calculated after interest, taxes, depreciation, amortization and all forms of compensation.”

The rail industry has defended the gap between worker pay, executive payouts by arguing that workers haven’t contributed to their skyrocketing profits.

“The (companies) maintain that capital investment and risk are the reasons for their profits, not any contributions by labor,” a recent federal report noted.

The contrast between gigantic executive pay packages and worker grievances is the context for a possible nationwide strike that has been long in the making. After years of cost-cutting, workers say they are perennially short-staffed, aren’t able to take sick leave due to draconian scheduling attendance policies, and that many in the rapidly aging workforce are so burned out they are leaving the industry.

In February, BNSF, the major railroad controlled by Warren Buffett, introduced a complex new attendance policy that, combined with inconsistent scheduling policies, left workers with very little free time when they were not on call. Since then, 700 union members have quit the company.

The turnover is likely one of the reasons why BNSF has seen a 546 percent increase in unfilled freight orders, according to an analysis of federal government data by the American Farm Bureau Federation.

Worse Conditions For Workers, A Jackpot For Execs

While conditions for workers have worsened, executives have reaped a jackpot: On average, the CEOs of five major rail companies were paid more than $16 million in 2021 alone:

Even more railroad profits have been going into stock buybacks and dividends, which benefit executives and wealthy shareholders.

According to the chairman of the federal Surface Transportation Board, which oversees the nation’s railroads, since 2010 the major American railroad companies have spent $146 billion in buying up stock off the market to deliver profits to their shareholders, and paid out an additional $50 billion in dividends. In total, the companies have devoted $196 billion to buybacks and dividends that benefit their executives and shareholders–far more than the $138 billion they spent on infrastructure improvements during the same period.

“The rail industry has sucked profits out of their workforce to pay big dividends and compensate stockholders,” said Ron Kaminkow, general secretary of the cross-union Railroad Workers United. “They jack up prices, cut costs, poorly maintain their locomotives and facilities, just to make money. Is this a good thing for the American people?”

However, more than 100,000 railroad workers still need to vote to approve the deal. Key players say their colleagues still don’t know enough about the proposed agreement to make a final decision.

“I don’t have a clue what the [agreement] says,” said Kaminkow. “I can’t even tell you if the agreement says one sick day [is allowed] or three. The language we have seen does not give us a clue.”

It’s why Kaminkow says it’s premature to declare the crisis has passed.

“At this point, the union leadership and the White House want to have a victory lap,” he said. “[But] workers still have the final say and can vote it down. Maybe the rank and file will join that party, but right now we don’t understand what the hell we’re looking at.”

Union workers have been negotiating with rail companies to address their grievances since 2019. However, such negotiations are governed by the Railway Labor Act (RLA), which requires a far more complex series of steps than other labor negotiations.

What’s more, longstanding railroad allies like House Majority Leader Steny Hoyer (D-Md.) have threatened workers by saying that Congress will pass legislation banning them from striking “if needed.” Such legislation could violate international labor law, which enshrines the right to strike as a fundamental right of workers.

On August 17, an emergency board Biden convened on the labor negotiations recommended workers receive a 24 percent raise over a five-year period, along with increased coverage of healthcare costs.

The American Association of Railroads, an industry group, welcomed the board’s proposal, saying the recommendations “should set the framework for a negotiated agreement between railroads and unions.”

However, rail workers expressed concern that the proposal offered no changes to the work rules that had allowed for draconian attendance and scheduling practices.

The proposed agreement reached Thursday, which workers will vote on in the coming days, appears to allow for more scheduling flexibility and unpaid sick time. But since none of the rail workers have yet to see the entire deal, some are already taking to social media to express their concerns.