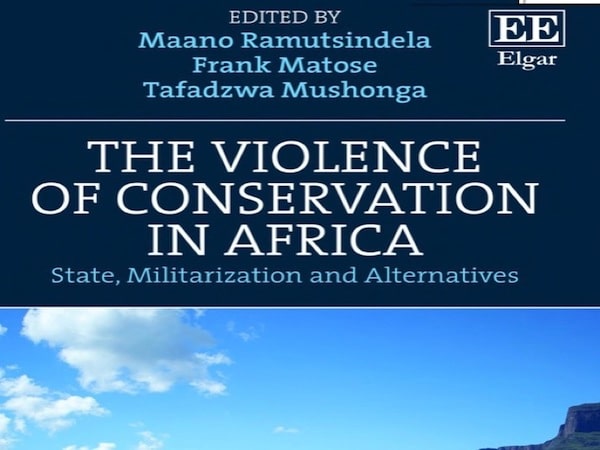 In this series, we ask acclaimed authors to answer five questions about their book. This week’s featured authors are Maano Ramutsindela , Frank Matose, and Tafadzwa Mushonga. Ramutsindela is Professor of Geography in the Department of Environmental and Geographical Science at the University of Cape Town. Matose is Co-Director of the Environmental Humanities South Centre at the University of Cape Town. Mushonga is a Postdoctoral Research Fellow in the Centre for the Advancement of Scholarship at the University of Pretoria, South Africa. Their co-edited book is The Violence of Conservation in Africa: State, Militarization and Alternatives.

Maano Ramutsindela, Frank Matose, and Tafadzwa Mushonga: The book places African states and their behaviors towards African people in conservation spaces within the global environmental agendas of powerful states and well-funded conservation organizations. It interprets conservation as an ideology referencing African landscapes without people. Such an ideology separates people from their biophysical and cultural milieus, leading to conservation violence authorized by states against their citizens. The violence of conservation cannot be ascribed to the character of African states alone but results from the interaction of African states with foreign governments, donors, non-governmental organizations, and environmental capitalists working for a neoliberal global economy. The book exposes the racist underpinnings of conservation by demonstrating the links between conservation violence and the perception and stereotypes of black people as subhuman. The current preoccupation with environmental crises under the umbrella concept of the planetary emergency (rapid change of earth’s life support system and the need for urgent global actions to protect and maintain earth’s life support systems for the future of both humanity and earth) is being used as one of the rationales for creating new or expanding existing conservation estates. Proposals to set aside 30% of the land and water for conservation raise questions about where the land would come from and how such a move would affect ordinary people’s livelihood. We think attempts to achieve these goals are likely to unleash a wave of violence against black people.

RS: What do you hope activists and community organizers will take away from reading your book?

MR, FM and TM: The message of the book to activists and community organizations is simple: there is no ending to the brutality of conservation on black bodies despite changes in the conservation script that sweeten the enterprise by using illusive concepts like community participation and peace parks. There are three main options to work with. The first is to decolonize the western concept of conservation and to center black lives, culture, and experiences in conservation thinking and practices. The second is to discard prescribed ecologies of co-existence promoted as the interconnected and continuous relations between people and nonhuman nature, yet undermining relations that have served black people for millennia in the provision of foods, medicines, and so on. Such ecologies are promoted in specific regions of the world to entrench the problematic division of the world into civilized and uncivilized peoples. The third is to be cautious community conservationists, who could be tricked into enabling land grabbing and mushrooming of foreign and elite business interests in communal lands. In short, activists and community organizations should protect themselves from epistemic corruption. Communities should be aware of the various and growing interests in their natural resources as new markets. What anti-poaching strategies have taught us are the ways in which members of communities are enrolled in intelligence networks, which result in destroying solidary among victims of conservation.

RS: We know readers will learn a lot from your book, but what do you hope readers will un-learn? In other words, is there a particular ideology you’re hoping to dismantle?

MR, FM and TM: We are hoping to dismantle the western ideology of conservation and its various guises as the only way to save the planet and its inhabitants. We seek to restore and validate the multiple meanings of conservation embedded in various communities around the world. We also caution against the risks of continuing with colonial-era conservation strategies coated in jargons and empty promises. There is a need to unlearn the environmental altruism of philanthropists sponsoring nature conservation projects but turning a blind eye to the brutality accompanying these projects. Readers also need to be sensitive to the monolithic view of the Southern state as the instigator of conservation violence and to appreciate the geopolitics of conservation, which creates a Janus-faced state. There is a need to unlearn measuring conservation successes by counting the number and size of protected areas in each country and to appreciate conservation efforts by ordinary people who live with nonhuman nature.

MR, FM and TM: The various chapters in the book are influenced by critical scholarship, and the book is anchored on epistemic defiance and disobedience. This intellectual movement spread across the Global South as part of the anticolonial movement and has continued to focus on human conditions, systems of oppression, class struggles, injustice, and inequality in the world. We draw on the inspiration from Claude Ake, Mahmood Mamdani, Achille Mbembe, Ali Mazrui, James Blaut, Emmanuel Wallerstein, and Walter Rodney to place the African state within a global political economy and to contextualize the meanings and consequences of nature conservation in Africa. Regarding conservation and (non)violence, Ramachandra Guha’s work and the activism of the Chipko movement in India and the Green Belt Movement in Kenya inspired our thinking about the violence/non-violence binary and our proposals for acknowledging and supporting everyday environmentalism. Our conception of nonviolence is influenced by Judith Butler, Mahatma Gandhi and Martin Luther King, Jr. We refuse to see nonviolence in conservation as passivity or withdrawal but instead consider it a force gained by refusing to be violent.

RS: Which two books published in the last five years would you recommend to BAR readers? How do you envision engaging these titles in your future work?

MR, FM and TM: The Commons in an Age of Uncertainty: Decolonizing Nature, Economy, and Society. Franklin Obeng-Odoom. University of Toronto Press, 2021.

Obeng-Odoom skillfully engages the trajectories of the Conventional Wisdom and the Western Left Consensus on the idea of commons to propose a ‘Radical Alternative’ anchored on just land, the creation of the social state, and replacing rentier capitalism and its institutions with commons-based systems. These pillars of a radical alternative are necessary for transforming the social, political, economic, and environmental systems that continue to shape human life in the twenty-first century. The social state and its emphasis on inclusive prosperity through commoning of rent represents an antithesis of the capitalist state. We would like to engage the conceptualization of land as a methodological approach to nature conservation, and how it shapes the identity of Africans and black societies globally. This is a line of inquiry that promises to open new ways of thinking about conservation and society.

In the Conservation Revolution, Büscher and Fletcher critically reflect on three categories of conservation research and practices, namely mainstream conservation, neoprotectionism, and new conservation to lay the foundation for their proposal for convivial conservation, which stands in opposition to colonial and capitalist conservation models. For them, convivialism entails moving away (a) from protected to promoted areas, (b) from saving nature to celebrating human and nonhuman nature, (c) from touristic voyeurism to engaged visitation, (d) from spectacular to everyday environmentalisms, and (e) from privatized expert technocracy to common democratic engagement. This proposal brings together disparate critiques on conservation and consolidate them into a common theoretical incision. The book raises important questions about how we move from one view of conservation to another and how enduring and globally supported conservation practices could be interrupted to usher in a new conservation ethos. Of significance to us is how convivial conservation intersects with the everyday environmentalism experienced on the continent.