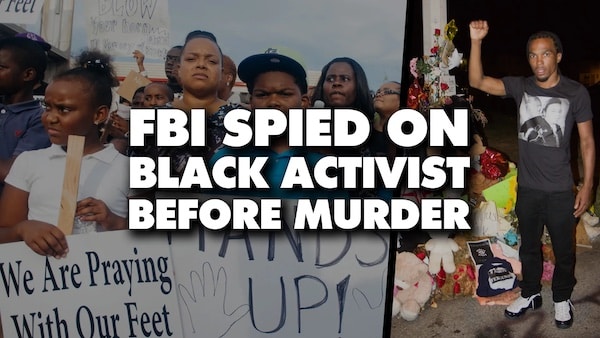 The FBI harassed Black revolutionary Darren Seals and compiled a 900-page report on his organizing against racism and police brutality in Ferguson, Missouri, birthplace of the Black Lives Matter movement.

Seals was shot to death in 2016, then set on fire in his car in an unsolved murder.

The FBI fully redacted approximately 860 of the pages, and partially redacted parts of the remaining roughly 45 pages.

In the report, the FBI called Seals “a self-described revolutionary who has espoused somewhat militant rhetoric and has access to weapons.”

In June 2016, the activist was “investigatively detained” by local police who pulled over Seals in his car on FBI orders.

Seals had proudly described himself on his Twitter account as a “Revolutionary, Activist, Unapologetically BLACK, Afrikan in AmeriKKKa.”

Although he was one of the co-founders of Black Lives Matter, Seals was very critical of the nonprofit-industrial complex and the attempt to co-opt the popular movement.

A working-class activist who made a modest living as on an assembly line at General Motors, Seals harshly criticized people like DeRay Mckesson, who were handpicked by the corporate media, funded by billionaire-backed corporate foundations, and turned into so-called “leaders” of what had been a grassroots movement.

Seals condemned them as opportunistic “sellouts.” He ridiculed:

Let me start an organization; give me a couple grants; start me a couple Gofundmes; tweet a little bit; and now they’re big shots; they’re traveling the world.

They’re in these orgs, getting paid $5000, $10,000 a month, traveling the fucking world, speaking like y’all are fucking helping the community, but you ain’t doing shit for the community.

“We got blood, sweat, and tears in the streets, for nothing,” Seals added.

People risked their lives; people lost their jobs, lost their homes. There are cats in prison right now, doing five, 10 years for Mike Brown shit. This shit was real.

We could have changed the fucking world. All you wanted was a fucking donation, and a couple Twitter followers.

“I didn’t get in it for no money,” Seals explained.

First of all, I didn’t even know you could make money off that type of shit, like I didn’t know shit about soliciting grant funds.

“I came out there strictly to talk about racism, educate people, let them know how we need to come together,” he said.

We need grassroots organizations from the people in the community, people who genuinely give a fuck, people from the struggle.

I don’t give a fuck about none of this shit. You kill me tomorrow; I ain’t never gonna not speak on this, on the real. And they know that. They knew that when they met me.

That’s why they made sure my face ain’t get too big.