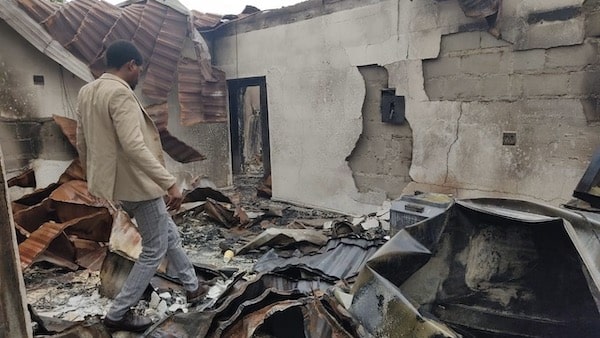 The home of the President of the People’s United Democratic Movement (PUDEMO), Mlungisi Makhanya, in Swaziland, was attacked in the early hours of 20 September 2022.

In Swaziland’s eastern town of Siketi in the Lubombo region, an alleged state-sponsored hit-squad, bombed the residence of Mlungisi Makhanya, president of People’s United Democratic Movement (PUDEMO), after midnight at about 1 AM on September 20.

“Residents in neighboring houses heard gunshots. Then they saw armed men had climbed a wall fence [of Makhanya’s house] and were shooting at the electric cable. After the lights went out, they threw what seemed to be explosive grenades into his house,” Wandile Dludlu, Secretary General of PUDEMO, told Peoples Dispatch. When flames engulfed his house “they sped away in their cars.”

Makhanya, however, is safe. Two months ago in July, PUDEMO had received credible information that its president was going to be a target of assassination, Dludlu said. PUDEMO is one of the leading pro-democracy parties in the continent’s last absolute monarchy where all political parties are banned.

Makhanya had been moved to safety in neighboring South Africa, where several pro-democracy activists from Swaziland have been forced into exile or hiding by the regime of King Mswati III. 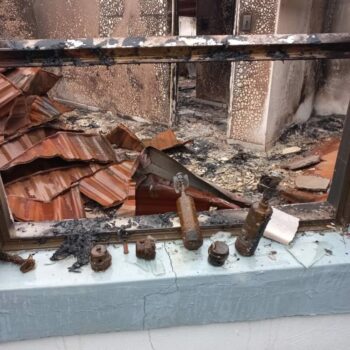 When asked if the police have registered any case, Makhanya replied, “Of course not.” He said,

In a statement after the bombing, PUDEMO said,

This attack comes in the backdrop of threats from Mswati’s traditional governor, Timothy Ginindza, to the effect that the regime has trained an arson squad whose sole purpose is to target and burn down the homes of leaders of the Mass Democratic Movement (MDM) and to assassinate them.

MDM is a coalition of more than a dozen pro-democracy political parties, student unions, trade unions, youth organizations, and other groups. Ginindza’s threat to such organizations, Dludlu said, has been caught in an “intercepted” cell phone conversation in which he was “discussing.. the plot to bomb properties belonging to political leaders,” according to Swaziland News.

PUDEMO maintains that this hit-squad is a direct result of Mswati’s order to the security forces to take an “eye for an eye,” as he threatened in his Police Day address on August 5. Dludu said that there has been a significant rise in “attacks on homes of leaders and activists, arrests, and clampdown on mass activities like protests” since this speech.

Leaders of other prominent pro-democracy parties, including the Communist Party of Swaziland (CPS), have also faced increased attacks and raids on their homes.

Many believe his threat is an incitement to exact revenge for the attacks on his properties last year. These attacks occurred during the broader anti-monarchist insurrection that followed the violent crackdown on unprecedented nationwide peaceful pro-democracy marches.

Amid the attacks on the businesses and industries he owns, the King had briefly fled the country, returning only after his army had put down the rebellion by killing over 70 people and arresting hundreds.

Nevertheless, strong anti-monarchist sentiments have not only prevailed within urban contexts, but has also taken root in villages, which until last year were presumed loyal to the King.

Despite intensifying repression by the security forces who have since grown increasingly nervous, protests have continued as a regular feature in this small landlocked country with a population of 1.2 million. Most of the Swazi economy is owned by the King and run to finance the royal indulgences, including palaces, a fleet of Rolls Royce cars, and private jets. The youth see the myriad businesses and industries owned by him as a prime target to attack.

In this context, the monarch’s call for security forces to take an “eye for an eye” appears to have translated into increasing attacks and arson on homes of pro-democracy activists.

PUDEMO has assured that “the president remains unshaken, defiant, and ready for the revolutionary task of fighting side by side with you in attaining the freedom and liberation of the country from royal rule.”

PUDEMO and the pro-democracy movement in Swaziland also received international messages of solidarity.

the International Peoples Assembly (IPA) wrote in a statement:

We vehemently condemn this and all attacks, harassment and intimidation of the people of Swaziland by the monarchy as a blatant violation of basic human and political freedoms.

The IPA, comprising about 200 progressive organizations from across the world, has reiterated that “peoples’ sovereignty and democracy are core pillars of our work and must be defended from Western Sahara and Morocco to Swaziland!”