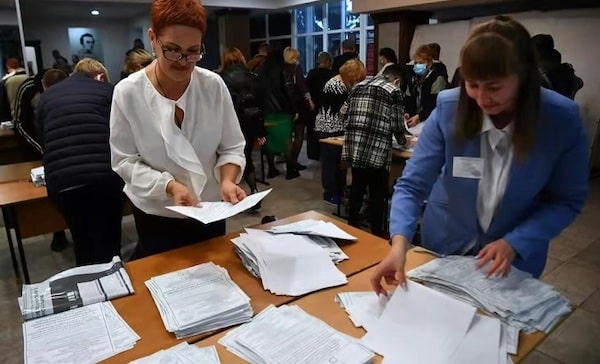 On Wednesday, the leaders of four regions in eastern and southern Ukraine called on Russian President Vladimir Putin to incorporate their territories into Russia.

Once the results of the accession referendums held in the previous days were known, the leaders of the self-proclaimed republics of Lugansk and Donetsk, Leonid Pasechnik and Denis Pushilin, traveled to Moscow to personally request President Vladimir Putin to incorporate these regions into the Russian Federation.

The heads of the administrations of Kherson and Zaporizhia also issued statements in which they also advocated “reunification” with Russia, highlighting the support this decision received in the referendums that were held between September 23 and 27 amid attacks perpetrated by Ukrainian forces.

The Russian news agency RIA published the results of the referendums held in the four separatist regions, where the majority of their populations voted in favor of annexation to Russia. The votes in favor of YES were as follows: Kherson (97%), Zaporizhia (98.19%), Lougansk (97.82%), and Donetsk (98%).

My statement at a press conference in #Donetsk yesterday after 4 days observing referendum prep & voting, ballot counting & external voting. The West has always lied & it will continue to lie especially when people resist their tyranny & oppression. #Donbass_is_Russia pic.twitter.com/g2SZleeeZ2

The annexation process of Donetsk, Lugansk, Kherson, and Zaporozhie to the Russian Federation might be completed in just 12 days.

According to Russian law, Putin must first recognize the independence of Kherson and Zaporizhia before approving their accession to Russia. This already happened on Feb. 21, three days before the start of the Russian special military operation in Ukraine.

On Oct. 3, the Russian Lower House will hold an extraordinary session to deal with the issue. A day later, the Senate plans to debate the annexation of the new territories. Once both houses give their approval, President Putin will do the same.

However, according to the Institute for the Study of War and the British intelligence, the news about the annexation could even come on Friday, Sept. 30.