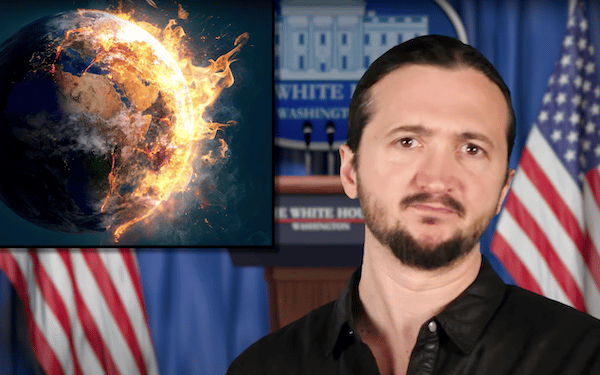 Eleven million dollars per minute! That’s how much all the countries in the world spend to subsidize fossil fuels. That’s what we pay.

We know we’re in a climate crisis now. Hopefully, you know that and if you don’t, then stop licking the bottom of the public pool. That’s not good for you.

Even Bloomberg News admits that “…in three decades, more than 100 million Americans will live in an ‘extreme heat belt’ where at least one day a year, the heat index temperature will exceed 125° Fahrenheit (52° Celsius)…”

And of course, many more days will be a completely unbearable 100° Fahrenheit. It’s like how being punched in the face is awful unless you’ve just been pounded in the balls. Getting hit in the face is downright neighborly after a testicle tackle.

And in case you think 2050 is a long way off, we live closer to the year 2050 than we do to 1990. I don’t know why, but that makes me feel old. That and the fact that the first “Home Alone” came out closer to the Vietnam War than to today. Macaulay Culkin needs to answer for that.

So hopefully, by now, you understand how dire things are.

By the way, my favorite idiot climate deniers are those who say it’s clearly not happening because Leonardo DiCaprio flies in a private jet sometimes. Who cares about Leo? All the plants are dying. Leo doesn’t matter! That’s like if you were in the middle of a blizzard, dying of hypothermia, and refusing to build a fire to survive because you saw Tom Hanks without a jacket on.“

The point being, we need to stop fossil fuel use and large-scale animal agriculture immediately, as those are the two biggest drivers of climate catastrophe. But instead, we’re going in the opposite direction.

Project Censored’s new book comes out soon, and in it, they list the 25 most censored stories of the past year. One of them this year is that the “Fossil Fuel Industry is Subsidized at a Rate of $11 Million per Minute.”

This is a quote from the book:

A comprehensive study of 191 nations, published by the International Monetary Fund in September 2021, found that globally the fossil fuel industry receives subsidies of $11 million per minute, … fossil fuel companies received $5.9 trillion in subsidies in 2020, with support projected to rise to $6.4 trillion by 2025, according to the IMF report.

So we’re helping pay for our own planetary death to the tune of $11 Million a minute. Isn’t it strange that if you met a guy who was funding your death—like you personally—you’d hate that guy? You’d be like, “Hey asshole, stop paying to have me killed.”

But if it’s a company that is killing the future for all of us, we’re like, “Yeah, who? Exxon? Let’s give them money. I like them. They have my favorite kind of beef jerky in the little store. So it’s fine that they’re killing us all. I’m cool with it.”