A sophisticated military operation—that required exhaustive planning, possibly involving several actors—blew up four separate sections of the Nord Stream (NS) and Nord Stream 2 (NS2) gas pipelines this week in the shallow waters of the Danish straits, in the Baltic Sea, near the island of Bornholm. 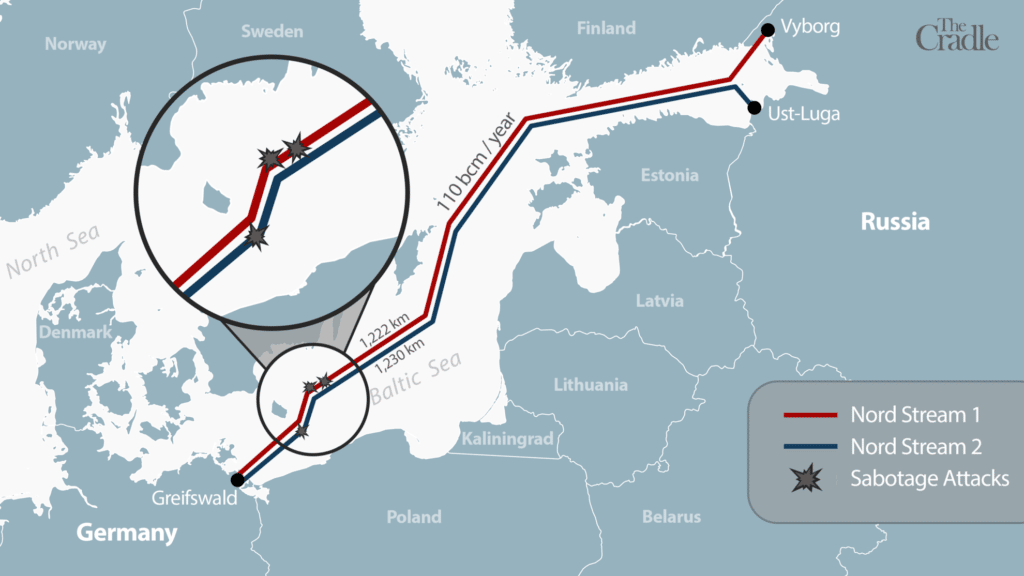 Swedish seismologists estimated that the power of the explosions may have reached the equivalent of up to 700 kg of TNT. Both NS and NS2, near the strong currents around Borholm, are placed at the bottom of the sea at a depth of 60 meters.

The pipes are built with steel reinforced concrete, able to withstand impact from aircraft carrier anchors, and are basically indestructible without serious explosive charges. The operation—causing two leaks near Sweden and two near Denmark—would have to be carried out by modified underwater drones.

Every crime implies motive. The Russian government wanted—at least up to the sabotage—to sell oil and natural gas to the EU. The notion that Russian intel would destroy Gazprom pipelines is beyond ludicrous. All they had to do was to turn off the valves. NS2 was not even operational, based on a political decision from Berlin. The gas flow in NS was hampered by western sanctions. Moreover, such an act would imply Moscow losing key strategic leverage over the EU.

Diplomatic sources confirm that Berlin and Moscow were involved in a secret negotiation to solve both the NS and NS2 issues. So they had to be stopped—no holds barred. Geopolitically, the entity that had the motive to halt a deal holds anathema a possible alliance in the horizon between Germany, Russia, and China.

The possibility of an “impartial” investigation of such a monumental act of sabotage — coordinated by NATO, no less—is negligible. Fragments of the explosives/underwater drones used for the operation will certainly be found, but the evidence may be tampered with. Atlanticist fingers are already blaming Russia. That leaves us with plausible working hypotheses.

This hypothesis is eminently sound and looks to be based on information from Russian intelligence sources. Of course, Moscow already has a pretty good idea of what happened (satellites and electronic monitoring working 24/7), but they won’t make it public.

The hypothesis focuses on the Polish Navy and Special Forces as the physical perpetrators (quite plausible; the report offers very good internal details), American planning and technical support (extra plausible), and aid by the Danish and Swedish militaries (inevitable, considering this was very close to their territorial waters, even if it took place in international waters).

Of course not. If the hypothesis is correct, this was a glaringly anti-German operation, carrying the potential of metastasizing into an intra-NATO war.

The much-quoted NATO Article 5—‘an attack on one of us is an attack on all of us’—obviously does not say anything about a NATO-on-NATO attack. After the pipeline punctures, NATO issued a meek statement “believing” what happened was sabotage and will “respond” to any deliberate attack on its critical infrastructure. NS and NS2, incidentally, are not part of NATO’s infrastructure.

The whole operation had to be approved by Americans, and deployed under their Divide and Rule trademark. “Americans” in this case means the Neo-conservatives and Neo-liberals running the government machinery in Washington, behind the senile teleprompter reader.

This is a declaration of war against Germany and against businesses and citizens of the EU—not against the Kafkaesque Eurocrat machine in Brussels. Don’t be mistaken: NATO runs Brussels, not European Commission (EC) head and rabid Russophobe Ursula von der Leyen, who’s just a lowly handmaiden for finance capitalism.

It’s no wonder the Germans are absolutely mum; no one from the German government, so far, has said anything substantial.

By now, assorted chattering classes are aware of former Polish Defense Minister and current MEP Radek Sirkorski’s tweet: “Thank you, USA.” But why would puny Poland be on the forefront? There’s atavic Russophobia, a number of very convoluted internal political reasons, but most of all, a concerted plan to attack Germany built on pent up resentment—including new demands for WWII reparations. 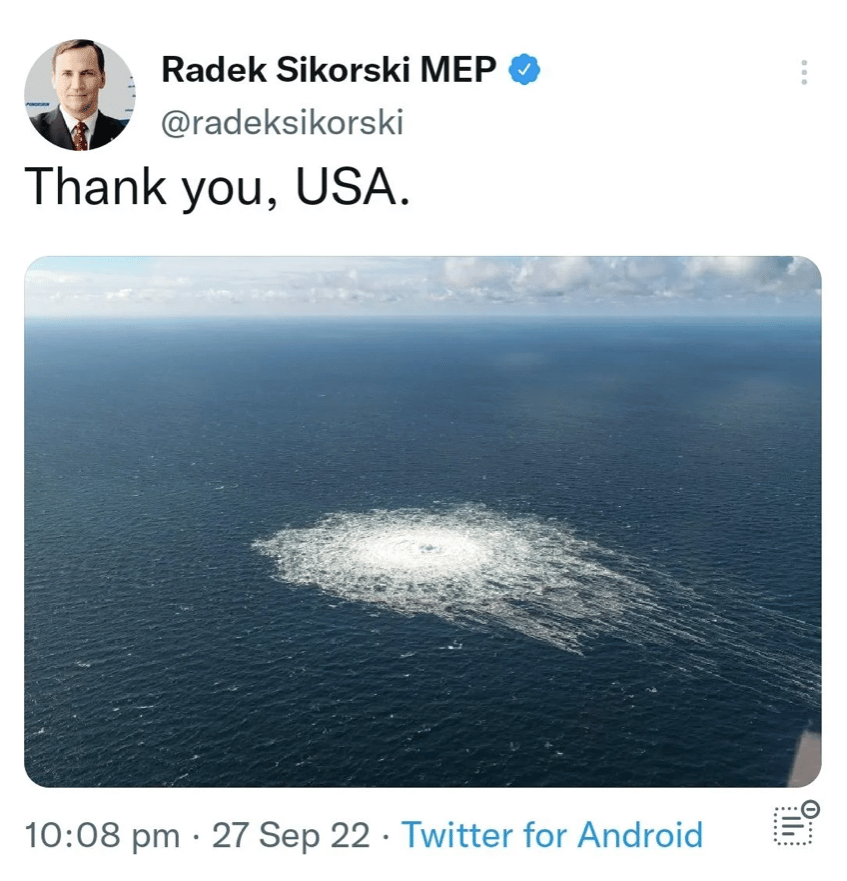 The Poles, moreover, are terrified that with Russia’s partial mobilization, and the new phase of the Special Military Operation (SMO)—soon to be transformed into a Counter-Terrorism Operation (CTO)—the Ukrainian battlefield will move westward. Ukrainian electric light and heating will most certainly be smashed. Millions of new refugees in western Ukraine will attempt to cross to Poland.

At the same time there’s a sense of “victory” represented by the partial opening of the Baltic Pipe in northwest Poland—almost simultaneously with the sabotage.

Talk about timing. Baltic Pipe will carry gas from Norway to Poland via Denmark. The maximum capacity is only 10 billion cubic meters, which happens to be ten times less than the volume supplied by NS and NS2. So Baltic Pipe may be enough for Poland, but carries no value for other EU customers.

Meanwhile, the fog of war gets thicker by the minute. It has already been documented that U.S. helicopters were overflying the sabotage nodes only a few days ago; that a UK “research” vessel was loitering in Danish waters since mid-September; that NATO tweeted about the testing of “new unmanned systems at sea” on the same day of the sabotage. Not to mention that Der Spiegel published a startling report headlined “CIA warned German government against attacks on Baltic Sea pipelines,” possibly a clever play for plausible deniability.

The Russian Foreign Ministry was sharp as a razor: “The incident took place in an area controlled by American intelligence.” The White House was forced to “clarify” that President Joe Biden—in a February video that has gone viral—did not promise to destroy NS2; he promised to “not allow” it to work. The U.S. State Department declared that the idea the U.S. was involved is “preposterous.”

Pres. Biden: "If Russia invades…then there will be no longer a Nord Stream 2. We will bring an end to it."

Reporter: "But how will you do that, exactly, since…the project is in Germany's control?"

Biden: "I promise you, we will be able to do that." https://t.co/uruQ4F4zM9 pic.twitter.com/4ksDaaU0YC

It was up to Kremlin spokesman Dmitry Peskov to offer a good dose of reality: the damage to the pipelines posed a “big problem” for Russia, essentially losing its gas supply routes to Europe. Both NS2 lines had been pumped full of gas and—crucially—were prepared to deliver it to Europe; this is Peskov cryptically admitting negotiations with Germany were ongoing.

Peskov added, “this gas is very expensive and now it is all going up in the air.” He stressed again that neither Russia nor Europe had anything to gain from the sabotage, especially Germany. This Friday, there will be a special UN Security Council session on the sabotage, called by Russia.

The attack of the Straussians

Now for the Big Picture. Pipeline Terror is part of a Straussian offensive, taking the splitting up of Russia and Germany to the ultimate level (as they see it). Leo Strauss and the Conservative Movement in America: A Critical Appraisal, by Paul E. Gottfried (Cambridge University Press, 2011) is required reading to understand this phenomenon.

Leo Strauss, the German-Jewish philosopher who taught at the University of Chicago, is at the root of what later, in a very twisted way, became the Wolfowitz Doctrine, written in 1992 as the Defense Planning Guidance, which defined “America’s mission in the post-Cold War era.”

The Wolfowitz Doctrine goes straight to the point: any potential competitor to U.S. hegemony, especially “advanced industrial nations” such as Germany and Japan, must be smashed. Europe should never exercise sovereignty: “We must be careful to prevent the emergence of a purely European security system that would undermine NATO, and particularly its integrated military command structure.”

Fast-forward to the Ukraine Democracy Defense Lend-Lease Act, adopted only five months ago. It establishes that Kiev has a free lunch when it comes to all arms control mechanisms. All these expensive weapons are leased by the U.S. to the EU to be sent to Ukraine. The problem is that whatever happens in the battlefield, in the end, it is the EU that will have to pay the bills.

U.S. Secretary of State Blinken and his underling, Victoria “F**k the EU” Nuland, are Straussians, now totally unleashed, having taken advantage of the black void in the White House. As it stands, there are at least three different “silos” of power in a fractured Washington. For all Straussians, a tight bipartisan op, uniting several high-profile usual suspects, destroying Germany is paramount.

One serious working hypothesis places them behind the orders to conduct Pipeline Terror. The Pentagon forcefully denied any involvement in the sabotage. There are secret back channels between Russia’s Security Council Secretary Nikolai Patrushev and U.S. National Security Advisor Jake Sullivan.

And dissident Beltway sources swear that the CIA is also not part of this game; Langley’s agenda would be to force the Straussians to back off on Russia reincorporating Novorossiya and allow Poland and Hungary to gobble up whatever they want in Western Ukraine before the entire U.S. government falls into a black void.

Come see me in the Citadel

On the Grand Chessboard, the Shanghai Cooperation Organization (SCO) summit in Samarkand, Uzbekistan two weeks ago dictated the framework of the multipolar world ahead. Couple it with the independence referendums in DPR, LPR, Kherson and Zaporozhye, which Russian President Vladimir Putin will formally incorporate into Russia, possibly as early as Friday.

With the window of opportunity closing fast for a Kiev breakthrough before the first stirrings of a cold winter, and Russia’s partial mobilization soon to enter the revamped SMO and add to generalized western panic, Pipeline Terror at least would carry the “merit” of solidifying a Straussian tactical victory: Germany and Russia fatally separated.

Yet blowback will be inevitable—in unexpected ways—even as Europe becomes increasingly Ukrainized and even Polandized: an intrinsically neo-fascist, unabashed puppet of the U.S. as predator, not partner. Vey few across the EU are not brainwashed enough to understand how Europe is being set up for the ultimate fall.

The war, by those Straussians ensconced in the Deep State—neocons and neoliberals alike—won’t relent. It is a war against Russia, China, Germany and assorted Eurasian powers. Germany has just been felled. China is currently observing, carefully. And Russia—nuclear and hypersonic—won’t be bullied.

Poetry grandmaster C.P. Cavafy, in Waiting for the Barbarians, wrote “And now what will become of us, without any barbarians? Those people were some kind of a solution.” The barbarians are not at the gates, not anymore. They are inside their golden Citadel.