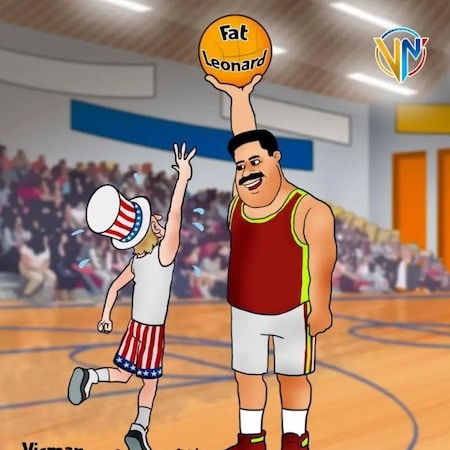 The principal perpetrator, in what AP News called “one of the most extensive bribery scandals in U.S. military history,” popped up in Venezuela of all places. Leonard Glenn Francis bilked the U.S. Navy out of at least $35 million.

The culprit goes by the moniker “Fat Leonard.” He tips the scales at 350 pounds, according to the U.S. Marshals wanted poster.

ABC News reports that Navy commanders “passed him classified information and steered their ships, mostly from the Navy’s 7th Fleet to ports he controlled” in exchange for “Kobe beef, expensive cigars, concert tickets and wild sex parties at luxury hotels.”

Francis is credited with commanding a mercenary army:

He became part of the Navy, even using his own warship, the Braveheart, to join classified missions against Al Qaeda. He enjoyed diplomatic cover.

Arrested in 2013 on bribery charges, Francis plead guilty in 2015. But his sentencing was problematically delayed seven years.

Eighteen days before his scheduled sentencing on September 22, he evaded the supposed 24-7 security of his house arrest, cut off his GPS monitoring ankle bracelet, and slipped across the Mexican border from San Diego. A $40,000 reward was put on his head by the U.S. Marshals.

According to numerous reports in touch with the U.S. Marshals, he flew from Mexico to Cuba and then on to Venezuela. Just hours before his would-be sentencing in the U.S., he was caught by Venezuelan authorities. Acting on an Interpol Red Alert, he was apprehended at the Caracas airport supposedly on his way to Russia.

Francis is now seeking asylum in Venezuela. The South America nation, by law, must consider his request. Neither U.S. nor Venezuelan official sources have commented on the asylum request.

While under house arrest, Francis voluntarily engaged in podcasts with video journalist Tom Wright. Francis bragged on camera about running a prostitution ring inside the U.S. Navy, crowing: “Everyone was in my pocket. I had them in my palm.” Peter Chiarelli, co-writer of the blockbuster film Crazy Rich Asians, made a deal to adapt the podcasts for television.

Juicier than the discredited Steele dossier on Donald Trump, Francis boasted in the podcasts:

What really worried the United States the most was these officers being corrupted by me, that they would be corruptible by the foreign powers.

Among those caught in the corruption was Rear Admiral Robert Gilbeau, the first active-duty admiral ever convicted of a felony. U.S. District Judge Janis Lynn Sammartino sentenced the high-ranking officer to a mere 18 months in prison. Gilbeau will still be pocketing a $10,000 per month pension, courtesy of the U.S. tax payers.

A Bush the Elder appointee to the federal bench, Judge Sammartino allowed Francis to be transferred from prison to supposed “strict house arrest.” There Francis lived the life of excessive luxury, according to Stars and Stripes, an official publication of the U.S. Defense Department.

Judge Sammartino’s compassion for the filthy rich and military brass apparently did not extend down to the sailors on the USS Reagan in their case over radioactive exposure after the Fukushima meltdown. The judge rejected their appeal.

“Fat Leonard” had friends in high places. By 2017, 60 admirals were among the 440 people who have come under U.S. judicial scrutiny. According to the official U.S. Naval Institute’s USNI News, the initial co-conspirators derisively labeled themselves “the cool kids” and “the wolf pack.”

Commander Mike Mickiewicz, an officer who was later convicted, told Defense News, Francis “was a crook, but he was our crook.”

Federal criminal charges were filed against 34 individuals in the corruption scandal and all but one have been convicted. Twenty-two pleaded guilty, including Francis and his four top aides.

Another admiral, the Navy’s chief intelligence officer, was only stripped of access to classified information. One of the factors that makes Francis such a high value asset was precisely his illicit privileged access to military intelligence.

U.S. District Court Judge Sammartino set a December 14 status hearing for Francis. However, Washington first has to get this high-value asset back to the U.S.

The U.S. and Venezuela have an extradition treaty, but the devil is truly in the details of how this transfer might be accomplished. For one thing, the corruption charges against Francis may not be technically covered in the extradition treaty. More to the point, though, are the political issues.

Juan Guaidó, the puppet that the U.S. claims is president of Venezuela, would surely send Francis packing in a heartbeat if Washington ordered him to do so. But pretend presidents don’t have any real power. So, the U.S. will have to deal with the actual government of Venezuela’s democratically elected President Nicolás Maduro.

The U.S. government could face an uphill challenge returning the fugitive [Francis] to American soil. The Biden administration doesn’t officially recognize President Nicolás Maduro’s socialist government, has no embassy in Venezuela, and has imposed crushing sanctions on the country that have further embittered relations.”

‘Fat Leonard,’ once a power broker, could become a pawn in U.S.-Venezuela diplomacy.

David Smilde agrees: “I have no doubt the Venezuelans will make hay of [Francis’ arrest], especially because they have felt the effects of the long arm of the U.S. justice system.” Smilde, a longtime cheerleader for crippling U.S. sanctions on the people of Venezuela, is with the inside-the-beltway think tank Washington Office on Latin America.

Among Venezuela’s options, says Brian Fonseca of the Florida Worldwide College, would be to allow Francis to continue on to Russia to “poke a finger within the eye of America.” Not likely, but speculation is running wild.

Coincidentally the trial of Venezuelan political prisoner Alex Saab opens in Judge Robert Scola’s U.S. District Court in Miami just two days before Judge Sammartino’s hearing for “Fat Leonard” Francis in another U.S. District Court. Ambassador Saab is contesting his illegal kidnapping–the U.S. prettifies it as an extradition–to the U.S. to face a charge of conspiracy to money launder. As a diplomat, he should have enjoyed absolute immunity from detention under the Vienna Convention, to which the U.S. is a party.

Both the U.S. and Venezuela agree that special envoy Alex Saab was a key figure engaged in the trade of fuel, food, and medicine in circumvention of the asphyxiating sanctions by the U.S. on Venezuela. They differ mainly on whether such humanitarian efforts should be rewarded or punished.

Alex Saab has not seen his wife and children going on three years. A Saab-Francis swap would serve the interests of both nations as well as achieve justice twice over. The Maduro government in Venezuela initiated and the FreeAlexSaab campaign supports freeing the diplomat.

Prisoner-exchange negotiations between the U.S. and Venezuela continue behind the scenes. As recently as September 1, nine prisoners were exchanged by their respective countries at an airport in Saint Vincent and the Grenadines. Two were Venezuelans, who are relatives of the Venezuelan president’s wife and were convicted by the U.S. of trafficking narcotics. Venezuela maintains they “were set up.”

Five others in the exchange are dual national U.S.-Venezuelan citizens, except for Jose Pereira who is a lawful permanent U.S. resident. The five were convicted of embezzlement when they were executives at the Venezuela subsidiary CITGO. The U.S. maintains they were “wrongfully detained.” The remaining two are also U.S. citizens. Ex-Marine and former U.S. military contractor Matthew Heath was convicted on terrorism charges in Venezuela. Osman Khan entered Venezuela illegally from the conflict zone on the closed Colombian border.

While largely silent about freeing their two nationals imprisoned on drug charges, Caracas has made freeing Ambassador Saab a national priority and a key point in its negotiations with the U.S.