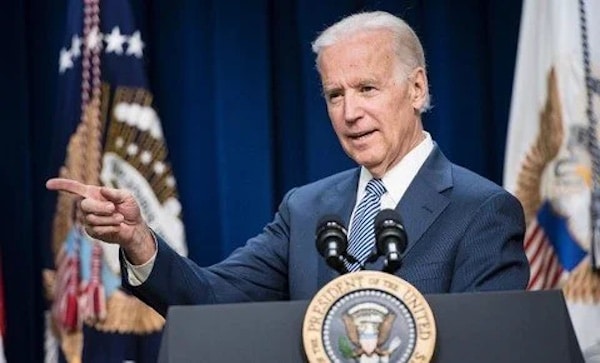 America Against the World: Everyone Is a “Frenemy”. Putin is a “Killer” Russia “Must Pay the Price” (Photo: counterinformation.wordpress.com/)

The New York Times reports that President Biden told a group of billionaires at a fundraising event Thursday night: “We have not faced the prospect of Armageddon since Kennedy and the Cuban Missile Crisis.”

The @nytimes reports that President Biden told a group of billionaires at a fundraising event last night:“We have not faced the prospect of #Armageddon since Kennedy and the #CubanMissileCrisis.” #nuclearwar 1/ pic.twitter.com/brReH0Wm2I

Having instigated the U.S.-NATO proxy war, provided Ukraine with unlimited weapons and money, pledged the reconquest of Crimea, and called for regime change in Russia, what is Biden’s “off ramp”? How can he deescalate “where he does not only lose face but significant power?”

The Times, in a masterpiece of polite understatement, notes that “Mr. Biden’s references to Armageddon were highly unusual for any American president.” Not merely unusual, absolutely unique. Moreover, he did not explain what he was doing to avoid a catastrophe.

Even more extraordinary, Biden issued this warning not from the Oval Office, in a public address to a nationwide and international audience, but to a select group of billionaires. In effect, he gave his super-rich backers advance warning to prepare their bunkers.

Biden warned that he is not exaggerating the danger. Putin is “a guy I know fairly well. He’s not joking when he talks about potential use of tactical nuclear weapons or biological or chemical weapons because his military is you might say significantly underperforming.”

The Times reported that “Mr. Biden said he did not think it would be possible for Russia to use a tactical weapon and ‘not end up with Armageddon.’” Coming from the U.S. president, this means, in effect:

Both options, and especially the second, follow logically from Biden’s remarks, which were made only hours after Ukrainian President Zelensky, in a statement reported prominently in the international press, called for “preventive actions, preventive strikes” against Russia.

Biden’s statement Thursday is so reckless that there may be an inclination to deny its very real and horrific implications. There can be no greater mistake. In every sphere, the ruling elites exhibit not only recklessness, but a staggering indifference to human life.

A ruling class that responded to the COVID-19 pandemic with policies that deliberately accepted the deaths of more than one million Americans, and millions more worldwide, is prepared to take military actions that lead to the deaths of countless millions.

Even more fundamentally, the ruling elites—under the pressure of the insoluble economic and social crisis of capitalism—are not able to control the outcome of events instigated by their own policies and actions.

As Leon Trotsky wrote in 1938, on the eve of World War II, the ruling class “now toboggans with closed eyes toward an economic and military catastrophe.” World politics is now in the hands of maniacs, desperate to salvage their profits and wealth at the expense of humanity.

If mankind is to survive, the working class must disarm the ruling class, deprive it of political power, put an end to the capitalist system and reorganize society on the basis of socialism. There is no other way out of this historic crisis.