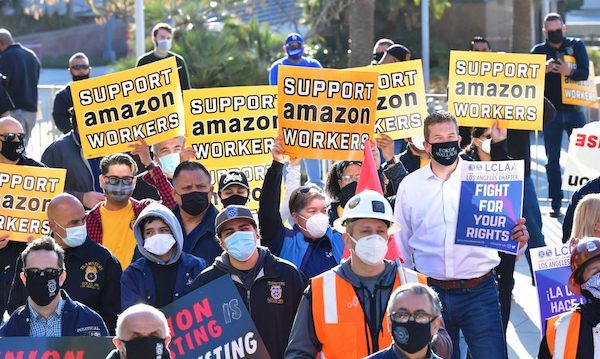 Left Voice: Your book Class Struggle Unionism is an increasingly popular text which puts forward important debates on strategy in the labor movement. Can you first tell us what you mean by “class struggle unionism” and why you think it’s important?

Joe Burns: Class struggle unionism is based on a very simple idea, which is that workers create all wealth. Through the employment process this wealth gets separated from the workers and flows to a handful of people in society. That is why and how we get billionaires.

This view of employment is very different from business unionism, which was the main competing form of unionism to class struggle unionism. Business unionism sees itself as having a very narrow role of negotiating the sale of labor. The view can be summed up with the slogan “a fair days wage for a fair days work.” Business unionists see themselves as narrowly representing a group of workers at a plant or industry and do not see themselves as part of a larger class struggle between workers and the billionaire class.

From this simple difference, comes very different forms of unionism. Class struggle unionism values sharp struggle against employers, rank-and-file democracy, and shop floor struggles, and are suspicious of the role of government and corporate media in backing employers. Because class struggle unions see our unionism as part of a larger struggle between workers and owners, we see the fight against racism and sexism as central to our unionism.

JB: In the 1980s, management launched an incredible offense against unionism unending decades of established bargaining relationships. Business unionism, bureaucratic and weak, proved incapable of resisting this trend. The class struggle unionists pushed for a fightback based on an anti-concessions stand, strike activity, picket line militancy, and reform movements.

But during this period, there arose a new form of unionism which attempted to straddle the fence between business unionism and class struggle unionism. The social base for labor liberalism were former class struggle unionists, veterans of the 1960s social movements who entered labor in the turn to industry. By the 1980s, many had risen to the mid-levels of the union bureaucracy or drifted into labor educator programs.

Their alternative relied on smart, savvy staffers to fight smarter within the existing system. Rather than the bitter open ended strikes and picket line militancy, they favored one-day publicity strikes, corporate campaigns, and the organizing approach.

But they also differed from traditional business unionism. On the plus side, they helped push the AFL-CIO from very conservative issues on race and immigration. But they also abandoned the workplace organization at the core of both traditional unionism and class struggle unionism. In fact, they used strikes and unionism to pass progressive legislation, placing them closer to middle class advocacy groups than true business unionism.

LV: Some sectors are fostering illusions at the NLRB under Biden’s administration but at the same time this entity is imposing a $13 million fine on the UMWA coal miners’ union over a protracted strike in central Alabama. How do you see the role of the state in the upcomingperiod?

JB: This is a very important question. Both business unionism and labor liberalism seek to get government institutions to protect unionism. Class struggle unionism, on the other hand, is skeptical of the government as a protector of labor rights.

The fundamental problem is a key role of the government is to protect the role and ability of the billionaire class to exploit workers by obtaining the value created by workers during their work shifts. Practically speaking, that means prioritizing protection of property rights over human and labor rights.

In the case of the mine workers, which you mention, the NLRB went after miners for minor picket line skirmishes and, incredibly, charged the union for list production during the strike. Similarly, the NLRB under Obama went after the Longshore workers for millions.

So the Biden NLRB makes some policy changes which assuredly will be overturned by the courts, and gets called the most pro labor NLRB. So this is exactly why we need class struggle analysis.

LV: One of the most interesting things in your book is the discussion you put forward for the need for class struggle tactics. What do you mean by that? Why is it necessary?

JB: I say in the book that you cannot have class struggle unionism without class struggle tactics. This is one of the key questions we face as a labor movement.

The employers and government have instituted a web of restrictions which outlaw effective union tactics. This makes stopping production difficult and forces unions to fight isolated battles rather than the industry-wide (or beyond) battles which created the modern labor movement.

I cover this in more detail in my first book, Reviving the Strike, but classic trade union theory understood that striking required stopping the production of the employer. Just putting up a picket line failed to accomplish this because in a national labor market employers could find scabs willing to cross the picket line and bust the strike

To economically harm the employer, unions had basic tools. The first were those of picket line militancy, such as occupying the plant or mass picketing to essentially blockade the employer.

Beyond that, unions could expand the strike by extending the picket lines to related employers, strike entire industries, or refuse to handle struck goods. These tactics of solidarity put pressure on employers and impacted profits.

These tactics have been outlawed and our failure to reclaim them constitutes an important element in the weakness of the modern labor movement.

While not an easy question, such an effort will likely require new fighting unions, rank-and-file movements, and cross-union formations. But it will also require the popularization of a set of class struggle ideas which can validate these actions.

LV: There is this ongoing debate about how the worker’s movement should relate to the Democratic Party. Some call to work with Sanders and the progressive wing, others to completely break with the Democrats and for workers to develop their own political perspective. In your book, you provide a sharp critique of the Democratic party which has played a leading role in disciplining labor. But what’s your take on the political relationship between labor and the Democratic Party?

JB: The close alliance of the Democratic Party and the labor officialdom allows the ideas of the billionaire class to enter and control the labor movement.

The late Tony Mazzachi, leader of the oil workers union used to say, “the bosses have two parties, the workers need one.” We need a labor party.

The question is, how do we get there? Among class struggle unionists, opinions vary, which is OK. My overall perspective is that it’s hard to see a true workers party without the development of a strong, militant, class-struggle wing. I think the two go hand in hand.

Any socialist or labor party needs to have a rooting in at least a wing of the labor movement. Otherwise it risks becoming a middle-class movement isolated from the workers’ struggle.

Our problem, however, is that the class struggle wing is relatively weak within the labor movement. The last serious attempt to move past the Democratic Party was the Labor Party Advocates initiative in the 1990s which raised debate but was unable to make the leap to running independent electoral politics.

It’s important to raise the critique of the Democratic Party and the need for independent politics but it should be part of a larger project to put labor on a class struggle basis.

LV: Lastly, as we’ve been seeing, there’s a new generation of workers who are fighting to not only unionize their workplaces, but also for better working conditions. Do you have any final words for them?

JB: Trust your instincts. A lot of people come in and you are told this is the ways it’s done, but the way it’s done doesn’t work.

We need a labor movement that’s a lot more militant and willing to challenge the status quo. That’s one if the great thinks about the Amazon and Starbucks organizing. I hope they keep it up in how they approach bargaining.