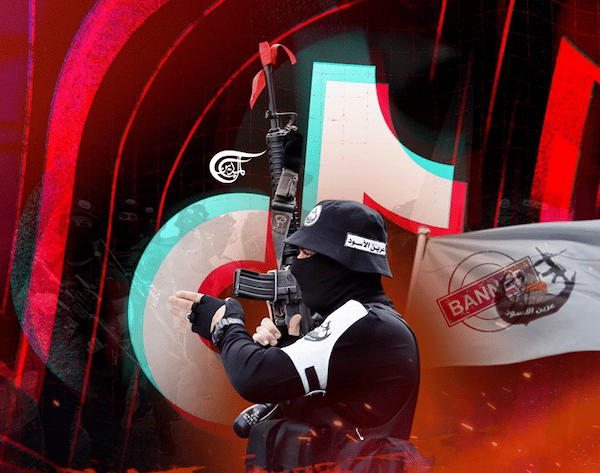 A malfunctioning Israeli military drone crashed in the occupied West Bank city of Nablus on Friday was and seized by a Palestinian Resistance group.

The Resistance group was later banned from the popular video-sharing platform.

What TikTok and Meta want to ban

Here’s the latest spree of Israeli violence: The occupation forces maintain their siege on the city of Nablus in the northern West Bank, amid the full closure of occupation military checkpoints and roads leading to the city.

In a similar context, two Palestinians were shot dead and six others were injured, on Saturday, during confrontations that erupted between the Israeli occupation forces and Palestinians following an Israeli raid on the Jenin refugee camp.

Local sources reported that Israeli Special Forces infiltrated Jenin, and snipers were stationed on the rooftops. IOF’s raid resulted in the outbreak of violent confrontations, during which the occupation forces used excessive force.

The same sources confirmed that the occupation forces prevented any ambulance from getting to the site of injuries. In yet another act of Israeli barbarism, a Palestinian doctor was shot by an Israeli sniper while treating one of the injured in the hospital yard.

When a 29-year-old Palestinian, Mohammed Musa Sabaaneh, a resident of Jenin refugee camp, was live-streaming as Israeli occupation forces (IOF) raided the camp, he was directly shot by the IOF in his chest.

Around 15,000 people were watching the broadcast during which “Israel” murdered Sabaaneh.

Viewers could hear what was going on but couldn’t see the video, at which point people could be heard in the background calling for an ambulance.

“The host is injured!” one viewer wrote in the comments.

Years of accounts from Palestinian journalists and activists that Facebook and Instagram appear to censor their posts were confirmed.

Human Rights Watch accused Meta last year of wrongfully removing and suppressing content by Palestinians and their supporters, including content regarding human rights abuses against Palestinians.

No such exceptions were ever granted to Palestinian victims of Israeli state brutality, and the sources don’t indicate that any other suffering group was given a similar level of latitude.

Back in 2021, during the holy month of Ramadan, Israeli occupation forces carried out a massive assault against hundreds of Palestinian worshipers in Al-Aqsa mosque in an attempt to repress them during the holiest month for Muslims. Palestinian Ministry of Health reported back then that at least 200 Palestinians sustained wounds due to the IOF’s aggressive attacks many of which required medical attention in hospitals.

However, that was not the only incident of Israeli aggression against Palestinians that took place that day. Earlier, Palestinian residents of Sheikh Jarrah confronted the occupation forces that were trying to illegally and forcefully expel them from their neighborhood following an Israeli occupation court order.

In the midst of all the oppression, Palestinians and the supporters of their cause launched a social media campaign, sharing images and videos in addition to posts accompanied by hashtags, reporting and documenting the occupation’s attacks, in an attempt to expose the violence and brutal practices of the occupying entity.

However, to many user’s surprise, much of the content that was posted on several social media outlets, including Twitter, Facebook, YouTube, and Instagram, suddenly was removed with some users reporting that their posts were flagged over alleged violation of the terms of use of the platform, while others where outright banned and had their accounts suspended.

Mona Al-Kurd was one of many live streaming the ongoing events in Sheikh Jarrah when her streaming cut off suddenly. Al-Kurd explained that her live-streaming feature was blocked while she was documenting the moment Al-Salhiyya’s family home was demolished. This exposed Instagram’s complicity and censorship of Palestinian content.

When these media outlets failed the Palestinians, especially during Sheikh Jarrah Neighborhood events, they decided to snatch the cameras for themselves and press “play”.

“Israeli propaganda is truly powerful, I witnessed this, especially in the West, Israel is the victim and we Palestinians are the aggressors,” Mariam Afifi, 27, a Palestinian musician and contrabassist with the Palestine Youth Orchestra told Al Mayadeen English.

The censorship of Palestinian voices, however, was not limited to the ones living in Palestine. On March 8 of 2022, Meta removed the FaceBook account of a Palestinian organization based in NYC, Within our lifetime, over a post praising Palestinian revolutionary women in celebration of Women’s International Day.

In a statement, the organization said, “While the restoration of our main account following a massive outpouring of support from our comrades and supporters around the world marks a victory, we know that Instagram continues to uphold anti-Palestinian racism and actively works directly with our oppressors to silence us.”

Big tech has long been an accomplice to the Israeli crimes against Palestinians, like Meta, then Facebook, which acknowledged in 2017 that it was complying with 95% of the Israeli government’s requests to remove Palestinian accounts and pages. YouTube was an accomplice as well, less so, but still as bad, with an 80% compliance rate.

The censorship battle that the Palestinians are facing is still ongoing, ranging from the filter that some media outlets use to blocking social media accounts and removing some of them.

Meta’s Instagram admitted that the platforms censored and removed posts and hashtags related to Al-Aqsa Holy Mosque and released an apology statement claiming that the site’s algorithm “mistakenly” flagged the posts as promoting “terrorist” content.

The social media giants admitted to the removal of some content and suspension of some accounts and released apologies while claiming that it was due to “technical errors”, but Palestinian organizations and users labeled these claims as illogical and irrational.

Activists and journalists have started a campaign against Meta’s policies, which have been targeting Palestinian content and the Palestinian narrative.

This campaign, which is calling for protesting the social media giant’s policies online under the hashtag “#FbCensorsJerusalem”, has accused Meta of ignoring the Palestinian narrative on the Israeli occupation’s crimes in occupied Al-Quds.

The group released a statement saying, “While [Meta] is escalating its crackdown on the Palestinian narrative under flimsy pretexts, it does not lift a finger about the Israeli incitement, which calls for the killing and apprehension of Palestinians, especially after the recent incident at the Chain Gate in occupied Jerusalem,” adding that “Facebook’s algorithms strictly censor any pro-Palestinian content and do not take into account what’s happening on the ground in Palestine.”

Since the beginning of Russia’s special military operation in Ukraine, pro-Palestine activists on social media platforms started to compare how tech giants, specifically Meta, are handling the Ukraine crisis.

Meta, who was censoring every pro-Palestinian post, story, or even a live stream, has allowed hate speech and violence against Russian President Putin and Russians, even allowing the spread of “gore” content if it involves dead Russian soldiers. While Meta is encouraging the spread of fake news on its platforms, it did not encourage the Palestinians to spread the truth all over its platform.

Why is it that when it comes to the Israeli most hideous massacres against Palestinians, it is a “controversial cause”, while when it comes to a topic such as Russia, Meta tries to forcefully impose the “truthful news” on its users?