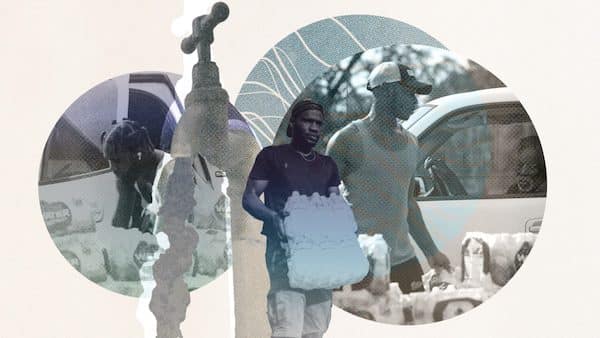 In several cities across the United States, residents struggle with system-wide neglect of water systems and the failure of the government to provide access to what is arguably the most essential resource.

This article was produced in partnership by Peoples Dispatch and Globetrotter.

The United Nations General Assembly recognized “the right to safe and clean drinking water and sanitation as a human right that is essential for the full enjoyment of life and all human rights” on July 28, 2010. Yet, 12 years later, this human right is still out of reach for millions across the globe, particularly in the Global South. Even in the United States, which has the largest gross domestic product globally, poor and working-class people, and in particular Black and Brown people, are denied this fundamental right. In several cities across the United States, residents struggle with system-wide neglect of water systems and the failure of the government to provide access to what is arguably the most essential resource.

The struggle for water is a struggle against racism

Dennis Diaz, a resident of the public housing project Jacob Riis Houses in the East Village, New York City, said that after he experienced nausea, diarrhea, dizziness, and migraine headaches around late August and early September, he took preliminary tests that revealed he had been exposed to arsenic.

As early as August 4, the New York City Housing Authority (NYCHA) was alerted about cloudy water conditions at the Jacob Riis public housing complex. After apparently testing the water for E. coli and chlorine more than a week later, on August 16, NYCHA announced that the water was safe to drink. But after 11 p.m. on September 2, NYCHA revealed that there was arsenic in the water supply. According to an article in City and State, the city said that officials had known about the arsenic two weeks prior.

Diaz called New York “the greatest city in the world” and explained his frustration with the double standard that he feels local politicians allow to persist when it comes to quality-of-life issues between majority-minority neighborhoods like his own and wealthier, predominantly white residential areas. “Imagine if,” he said, arsenic was found in the water by residents in Manhattan’s “Fifth Avenue or Soho, or Williamsburg,” Brooklyn. “Maybe the outcomes would have been different for them. But for minorities in my community, we’re next to nothing to the politicians.” According to the 2016 data provided by NYCHA, 40% of the heads of the households living in public housing under the Housing Choice Voucher Program were Black, while 48% had Latin American ancestry.

The city of New York is now denying that there ever was arsenic in the water at Jacob Riis, claiming that the testing method “introduced trace levels of arsenic” to the sample they collected. But Dennis Diaz, who recently received his bloodwork results showing low levels of arsenic, is not convinced. “They’re lying,” he said while referring to the latest statement by the city officials.

They did it in Flint, Michigan, where they lied to them [the residents] for years. You can’t believe these people.

In Baltimore, water in the western part of the city tested positive for E. coli on September 5. Affected neighborhoods included the area of Harlem Park/Sandtown-Winchester. Authorities advised residents in these areas to boil water before use due to the contamination.

By September 6, the “boil water advisory” stretched across West Baltimore and into the surrounding southwestern Baltimore County. The neighborhood of Sandtown-Winchester/Harlem Park is 96.7% Black, within the 62.8% Black city of Baltimore. This neighborhood also has a history of police brutality. In 2015, Freddie Gray died due to injuries sustained while in police custody after he was arrested in the area. A medical examiner ruled that his death was a homicide “because officers failed to follow safety guidelines.” In 2017, Harlem Park was locked down by police for nearly a week after a detective was murdered before testifying at a trial against other police officers. Some organizations questioned whether this action by the police was lawful.

Baltimore resident Rachel Viqueira was located in the boil water advisory zone. “While facing decades of underinvestment and neglect, these neighborhoods have simultaneously faced increasing racist police violence and surveillance,” she said. In 2020, Baltimore responded to the massive public protests surrounding George Floyd’s death by defunding the police budget by $22 million. But in 2021, Baltimore City increased police funding by $28 million. This not only canceled out the 2020 decrease but also tacked on an additional $8 million to the police budget.

“In Baltimore, and many other cities, the police budgets have ballooned at the expense of public investment in infrastructure, health, jobs, housing, and education,” Viqueira said.

Jackson, Mississippi, was under a boil water notice from July 29 to September 15. And from August 30 to September 5, the water stopped running for many of Jackson’s more than 150,000 residents, leaving public spaces like schools without running sinks or working toilets. Although water pressure has now been restored, the water remains contaminated.

This is a reality that Jackson has faced for a very long time. I know growing up, I remember always hearing my mother say, ‘Oh, we’re on boil water notice this week, don’t use the water [straight from the tap].’

Jackson is 82.5% Black, and this water crisis is only the latest in a chain of failures in the city’s underfunded water system. The roots of the water crisis originate in the era immediately following the racial desegregation of schools in Jackson in the late 1960s and early 1970s. Following desegregation, white residents left the city en masse. From 1960 to 1990, the white population residing in Jackson shrunk by 6,000. White departure meant that white residents, historically more well-off than descendants of Black people who were enslaved, would no longer constitute a large portion of the tax base for city funding.

Instead of finding concrete solutions to address the water crisis resulting from systemic racism, both the city of Jackson and the state of Mississippi have been considering privatizing the city’s water supply following the crisis. “We’ve already seen how privatization of Texas’ electrical grid meant massive shut-offs of heat in the middle of a winter storm,” said local activist Bezal Jupiter.

People lost their power, people froze, and some people even died [as many as 246]. Do we want the same future for Jackson’s water system?

A water crisis that never ended

The majority-Black city of Flint, Michigan, made headlines in 2016 when it was revealed that for two years, the State government had been covering up the fact that residents were actively being poisoned by lead in their water supply. Six years later, the Michigan Department of Environment, Great Lakes, and Energy said that the amount of lead in the water complies with state and federal standards, yet scientists insist that no amount of lead in water is safe. And as of April of 2022, the government was yet to replace 1,800 lead pipes.

“[Governments] will fund rich white communities for infrastructure upgrades, but they absolutely won’t do it for cities like Flint, Baltimore, and Jackson,” said Mitchell Bonga, a law clerk at Goodman, Hurwitz and James, a law firm that filed a class action lawsuit against former Michigan Governor Rick Snyder for his role in the Flint crisis.

‘They could have done it all along’

In the neighboring city of Detroit, which also has a majority-Black, low-income population, residents who cannot pay their water bills have been struggling against water shut-offs. “People can’t afford the water bill [in Detroit],” said local activist and Detroit resident Tharron Combs.

People sometimes owe hundreds of dollars in debt to the city for their water bill and when it gets shut off, obviously it’s a public health crisis.

The city imposed a moratorium on water shut-offs for the pandemic, extending it through 2022. But although the mayor announced his intention to end water shutoffs “once and for all,” the moratorium will expire at the end of the year. “They actually put [shut-offs] on pause for the pandemic, which kind of exposed one of the contradictions of capitalism,” said Combs. “They could have done it all along, and just let people have access to clean water.

“[People] can’t afford their water, or their water is unclean when they can afford it. They don’t have access to food. And this is not a condition that’s really unique to Detroit. This is the case in really any major Black city in the country… Clearly, it’s environmental racism all the way down,” said Combs.

Natalia Marques is a writer at Peoples Dispatch, an organizer, and a graphic designer based in New York City.