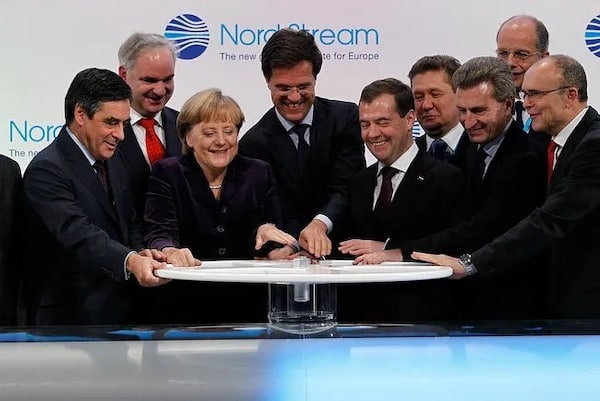 Ceremony of opening of gasoline Nord Stream. Among others Angela Merkel and Dmitry Medvedev, 2011. Kremlin.ru, (CC BY 3.0 https://creativecommons.org/licenses/by/3.0, via Wikimedia Commons)

Absolutely remarkable, Western media’s determination to ignore the recent Baltic Sea detonations, which knocked out the Nord Stream I and II gas pipelines. A major piece of Europe’s energy infrastructure, the joint property of Germany and Russia, has been destroyed. Any chance that Russian gas transmissions westward will be resumed is off the table. The Continent is now sent on a desperate search for new sources of natural gas, inevitably at higher prices. I cannot think of many stories that are more significant.

The Western press and broadcasters have reported next to nothing about this momentous development since the September 26 explosions.And it is now clear that the media’s silence reflects a larger silence. On October 14, Reuters reported that Sweden has declined to participate in a joint investigation with Germany and Denmark. German television reported that the Danes also dropped out. Now we have a German minister stating his government knows who is responsible for the attack but cannot say who it is. In all three cases, the explanation is the same: This matter is too sensitive to pursue and doing so risks “national security.”

So: There will be no joint investigation of the Nord Stream I and II incident. And whatever Sweden and the others may discover on their own, they have no intention of telling the world about it.

Unless you are given to parlor games that never end, it is nearly impossible to avoid concluding that the U.S. was either directly responsible for the Nord Stream I and II sabotage or supervised those who were. If national security is at issue, it is plain that the Russians had nothing to do with it and equally plain that the culpable entity is nominally allied with Germany but has no fundamental respect for its interests.

It is notable that Stockholm and Copenhagen have decided to shut up about what happened off a Danish island close to Germany’s Baltic Sea coast. It is shocking that Berlin has done so. Somebody just blew up a project worth €11 billion, $10.8 billion, that Germany set in motion and in which it has a majority share. In effect, the Federal Republic has chosen to stand with what is almost certainly a state actor as said actor impugned its sovereignty and destroyed not only its property but also its energy-sourcing alternatives.

What are we looking at here?

It is the story of how Europe has bowed supinely to America’s dictates since the Cold War decades, even when this does the Continent harm. Lately, it is the story of the disastrous toll the U.S.–led campaign against Russia via its proxy in Ukraine is taking on European societies and economies. And now we must wonder whether the story that began long ago turns out to end with the destruction altogether of Europe as an independent pole of power with a voice of its own and—just as important, to my mind—of “Europe” as an idea and an ideal.

Europe’s creeping economic ruin is the most immediate, tangible casualty of the war in Ukraine the U.S. provoked and the sanctions regime against Russia the U.S. leads and the European Union backs. The nearly incredible refusal of Germany and its neighbors to stick up for themselves on the pipeline question suggests that the larger consequence is the final collapse of all pretense that Europe is other than a collection of vassal states subservient to the U.S., even at the expense of their own citizens.

Think about this the next time the Biden administration bangs on about the sanctity of Ukraine’s sovereignty.

I was long among those who wondered with a certain measure of hope when Europeans would speak up and act according to what they determined was best for themselves. I spent decades at this. Yes, I remember thinking, the Continent is done with the Cold War binary Washington forced on the world. Yes, I thought more recently, Europeans will refuse to support the sanctions Washington imposed on Russia after the U.S.–cultivated coup in Ukraine in 2014. German businesses didn’t want them. The Greeks and Italians didn’t either. But when they came up for renewal every six months, as required by E.U. rules, they went through anyway.

Then Emmanuel Macron came along. When he hosted the Group of 7 in Biarritz three years ago, the French president tried on his de Gaulle act, declaring that Russia was inevitably part of Europe’s destiny and the Continent must find its own relationship with its vast eastern neighbor.

Yes, I said again, failing to see that Macron is little more than a squeaky weather vane mounted grandly atop the European barn.

No was the answer in these and many other cases.

This topic came up some years ago during an interview I did with Perry Anderson, the British writer and publisher. Why can’t Europe find its voice? I asked. Anderson had an interesting reply.

The last generation of European leaders with any experience of acting independently of the U.S.—Churchill, Anthony Eden, de Gaulle, et al.—passed into history during the early part of the Cold War, Anderson astutely pointed out. No generation since has any experience other than as dependents sheltering under the American security umbrella. They know nothing else. They have never spoken in voices of their own.

This is not to say Europe has been entirely at ease. By the mid–Cold War years there were signs aplenty that Europeans were restive within the trans–Atlantic relationship as Washington had fashioned it. De Gaulle withdrew French forces from the NATO command in 1963. Three years later he ordered NATO to close all its bases on French soil. Three more years after that, in 1969, Germany premiered its Ostpolitik. Another year on, Willy Brandt became the first German chancellor to meet an East German leader, Willi Stoph.

But Washington, flush with its post–1945 primacy in global affairs, had learned well by this time how to coerce its friends with a toothy American grin and whatever was required by way of money, bribes, fixed elections, political subterfuge, and all the rest. It had a nasty gift for force-marching Europeans to keep them in line with the Cold War crusade, their barely submerged disquiet notwithstanding.

So were those of us who wanted to see a freestanding Europe, in its way a bridge between West and East, so often disappointed. And so came my question to Perry Anderson only a few years ago: How come this?

And here we are with methane bubbling up in the Baltic Sea from what the BBC reports to be a breach of 50 meters, 164 feet, in the Nord Stream pipelines. Assuming American culpability of one or another kind in this crime—as I do not care for parlor games, I make this assumption pending evidence—there is a straight line between Washington’s capricious abuses of European sovereignty during the Cold War and the events of September 26. A nation that licenses itself to intrude into Europe’s affairs without more than murmured protests is a nation that will think little of wrecking an expensive piece of European infrastructure. And a Continent that bowed down for decades during the Cold War is a Continent that dares not say a word about it.

Europe’s goose seems cooked on the energy side now. Saad al–Kaabi, the Qatari energy minister said in an Oct. 18 interview with the Financial Times that for Europe to go without Russian gas will doom it indefinitely to economic decline and widespread suffering. If “zero Russian gas” flows into the EU, he said,

I think the problem is going to be huge and for a very long time.

Post–Nord Stream Europe is now at the mercy of hard-bargained contracts in the open market, where it will never match the price at which Russian gas would have flowed under the Baltic Sea to Germany. Or it can make agreements with Turkey, as Recep Tayyip Erdoğan arranges with Moscow to turn Turkey into a depot for Russian energy exports. Let’s put it this way: You don’t want to buy a used car from the Turkish president, never mind a multibillion-dollar energy supply.

And leave it to the Americans. Macron, Robert Habeck, who is vice-chancellor and climate minister in the Scholz government, and other European leaders are already complaining that American LNG due to arrive at European terminals is priced four times higher than what it goes for in the U.S. market.

It has been clear since the Nord Stream question broke into the open during the Trump administration that capturing the European natural gas market from Russia was part of what drove Washington’s vicious opposition to the completion of Nord Stream II. But we have to think in larger terms to explain so bold a move as the Baltic Sea detonations.

This is another part of the story that extends far back. As much as Washington feared the Russian bear, it fretted at least as much and possibly more about all those European impulses to achieve a stable settlement with the Sovs—Ostpolitik, what was called convergence, a “third way,” and other such notions. The true enemy was a threat greater than the Soviet Union: It was the gravitational pull of the Eurasian landmass and the perfectly logical thought that a sovereign Europe would find its destiny as its westernmost flank.

Preventing this by whatever means has been a submerged feature of Washington’s trans–Atlantic policy for decades. This is why a gas pipeline took on so immense a significance for the U.S. and why “whatever means” just computed out to a gross international crime and a full-frontal attack on European interests.

To turn the gaze forward, the most discouraging aspect of the Nord Stream incident is a tie between two grim realities. On the one hand, it seems clear now the U.S. is emboldened to do anything it likes to the Europeans to preserve its power over them, and on the other it seems just as clear the Europeans will take it in the way of the Stockholm syndrome.

But this is not the end of the story. I cannot even speculate whether or when Europe will produce a new generation of bolder leaders with thoughts of their own. This is the age of Liz Truss and Olaf Scholz, after all. But looking further out, I do not see that the U.S. can bring history’s wheel to a screeching halt even if it looks as if it just did: Macron was for once right when he asserted that Russia’s destiny was with Europe and Europe’s in an interdependent relationship with it. This is history’s longue durée, plain and simple. I’ve never heard of any nation stopping it for more than a short while.