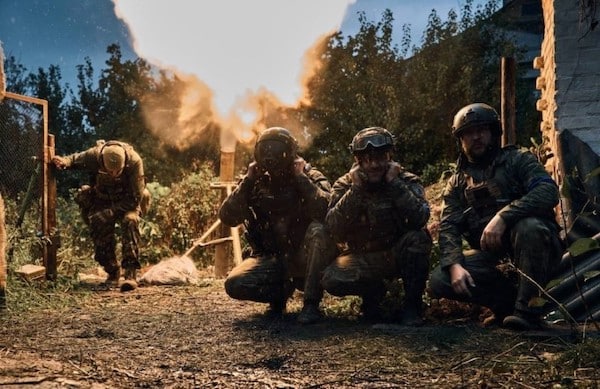 Ukrainian soldiers fire a mortar on the front line near Bakhmut, in the Donetsk region, September 26, 2022. (Photo courtesy the Ministry of Defense of Ukraine/Twitter.)

As the Ukraine war has escalated into a potentially catastrophic conflagration for all of humanity, the climate movement has gone AWOL.

A case in point is the ongoing leadership contest of the Green Party of Canada.

The Green Party leadership contest was launched nearly two months ago. In that time, all six leadership candidates have spoken at length, as one would expect, of the urgency of the climate crisis, but not one of the candidates (Anna Keenan, Chad Walcott, Sarah Gabrielle Baron, Simon Gnocchini-Messier, Elizabeth May or Jonathan Pednault) has issued a single statement on their campaign websites, or posted even one tweet, calling for negotiations to resolve the Ukraine war.

To be fair to them, one can understand their apparent reluctance to speak out against the relentless escalation of this existentially dangerous conflict. After all, the public discourse around this war has become so suffocating and toxic that one can hardly utter the words ‘peace,’ ‘negotiation,’ or ‘de-escalation’ without being accused of appeasing an aggressor or being a Putin propagandist.

The stakes, however, are simply too high for us to remain silent.

Indeed, there are good grounds to believe that the Ukraine war is far more dangerous for humanity than even the Cuban missile crisis, and that this conflict may constitute the most dangerous moment in human history.

Why? First and foremost, because NATO is at war with Russia.

Now many of you may point out that no NATO government has formally declared war on Russia. The realities on the ground, however, tell a very different story.

Although active-duty members of NATO militaries have not been ordered (so far as we know) into direct combat with Russian troops, NATO militaries have supplied billions of dollars worth of sophisticated weaponry to Ukraine. NATO is training recently mobilized Ukrainians to kill Russians. NATO is providing battlefield intelligence to the Ukrainian military, which is being used to target Russian troops and military assets. Special operations forces of certain NATO members, including Canada, are currently in Ukraine aiding Ukrainian troops in ways that are not entirely clear. Former soldiers of NATO militaries are engaged in direct combat with Russian troops, with the tacit approval or acquiescence of NATO governments. On top of all that, NATO governments have imposed upon Russia unprecedented sanctions that were explicitly designed to destroy Russia’s economy.

Plainly, NATO is at war with Russia in all but name.

Collectively, NATO states and Russia possess enough nuclear weapons to destroy the world many times over. Even worse, both sides have expressly and repeatedly stated that they are prepared to use those weapons if they deem their use to be necessary.

There is no question that the climate crisis constitutes an existential danger to humanity, but the danger posed by large-scale nuclear war is considerably worse. The climate crisis threatens to render the planet unlivable over a period of generations. That time scale will afford to humanity at least some opportunity to adapt, mitigate and innovate. By contrast, a large-scale nuclear war leaves no opportunity for adaptation, mitigation and innovation. A disaster of such a nature would render the planet unlivable in a matter of months, weeks or even days.

No amount of human ingenuity will save human civilization from nuclear Armageddon.

For these reasons alone, it behooves all of us—whether or not we are activists for the climate—to speak out now. For the sake of our children and future generations, we must demand that our governments pursue vigorous, good faith negotiations with a view to ending this heinous conflict as rapidly as possible.

For those of us who are climate activists, there are even greater reasons to demand a swift and peaceful resolution of this war.

First, NATO states and Russia are huge contributors to global emissions. We cannot resolve the climate emergency unless these emitters work cooperatively to transition their economies away from fossil fuels and toward renewable energy. Obviously, there is no realistic prospect of achieving the requisite level of cooperation and mutual trust in a state of escalating war.

Second, the Ukraine war is consuming vast (but scarce) economic resources that are desperately needed to fund the transition of our economies toward renewable energy and greater efficiency. Those resources are also required to assist poorer nations—particularly those which have contributed negligibly to the climate crisis—to protect themselves from the ravages of global heating.

Third, the war itself has become a significant, direct contributor to global emissions, precisely at the moment when the world must reduce them. The operation of large mechanized armies across a 1,000-kilometre front line requires the consumption of huge quantities of fossil fuels. The relentless bombardment of military equipment, infrastructure, weapons stores and fuel depots generates massive fires. The reconstruction of destroyed infrastructure will also generate large emissions. The sabotage of the Nord Stream pipelines (which almost certainly was the handiwork of one or more NATO militaries) is believed to have been the largest single release of methane ever recorded.

From a climate and ecological perspective, the Ukraine war is an unmitigated disaster.

Moreover, given how little time remains for the world to transition to a zero emissions economy, this war could not have befallen us at a worse time.

To put it bluntly, this is no time to prioritize political expediency and serenity over the reputational perils of anti-war activism.

The world desperately needs climate activists to step up and step up now, to lead and re-invigorate the enfeebled anti-war movement.

Ultimately, if we climate activists fail to answer the call, there may soon be no planet left to save from the climate emergency.

Dimitri Lascaris is a lawyer, human rights activist and former candidate for the leadership of the Green Party of Canada. He is based in Montréal.