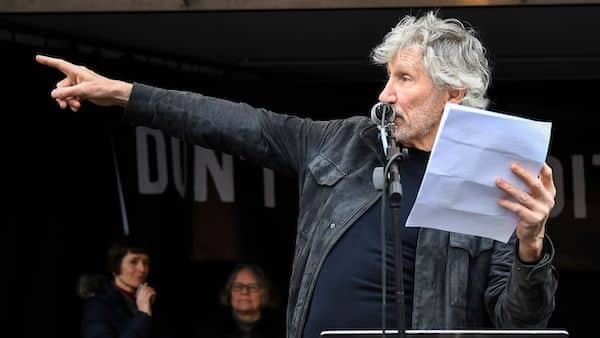 The witch-hunting and defamation campaign against British rock musician Roger Waters has also reached Berlin. Last week, Samuel Salzborn, the anti-Semitism commissioner of the Social Democratic-Left Party-Green Senate (state executive), called for the cancellation of a planned concert by the co-founder of the band Pink Floyd in the capital.

In what amounts to an outrageous slander, Salzborn described the musician in an interview with the Berliner Zeitung as “one of the loudest voices in the music business spreading anti-Israeli anti-Semitism.” Anyone who was serious about fighting anti-Semitism should not give Waters a stage, he said.

Similar attempts to prevent Waters from appearing have already taken place in Munich, Frankfurt am Main and Cologne. The planned concerts are part of his This Is Not a Drill concert tour, which has already drawn an audience of 1 million in the U.S. and continues in 13 European countries next year. The Berlin concert is scheduled to take place at the Mercedes-Benz Arena in May 2023.

The sinister campaign against one of the most admired musicians of the past 50 years is being conducted because Waters, 79, is a fearless opponent of imperialist wars and capitalist reaction. Nearly every song on This Is Not a Drill addresses “the pressing issues of our time: imperialist war, fascism, the poison of nationalism, the plight of refugees, the victims of state oppression, global poverty, social inequality, the assault on democratic rights, and the threat of nuclear annihilation,” as the WSWS wrote in its review of the U.S. tour.

Waters has notably distinguished himself as a defender of Palestinian rights and an opponent of NATO’s war in Ukraine. Those in power will not forgive him for that. Having banned virtually every critical voice from the private and public media, they are now cleaning out art and culture as well. Any means will do. They slander Waters nonstop as an anti-Semite and Putin supporter, although this has no basis in fact.

In a post on Facebook that received a great deal of support, Waters categorically rejects this agitation. “The Mayor of Munich and some members of the Green and SDP political parties and some other mouthpieces for the Israeli lobby have been slandering me, accusing me of being an anti-Semite and also a Putin apologist,” he writes.

I am neither of those things. Never have been and never will be.

I am however well-known for being a passionate supporter of peace movements in general and The Universal Declaration of Human Rights … in particular.

Waters continues, “I support equal human rights for all my brothers and sisters all over the world irrespective of their ethnicity or religion or nationality.” For this reason, he said, he opposed the violent rule of one ethno-religious group, the Jewish State of Israel, at the expense of the basic human rights of all people who lived in these territories but were not of the Jewish faith. This, he said, was unacceptable.

Alongside this post, Waters published a picture of the Nazi book burning in 1933, together with a picture of him and his wife Kamilah laying roses at the graves of resistance fighters Hans Scholl and Christoph Probst in Munich.

A particularly filthy attack on Roger Waters was published by the Jüdische Allgemeine under the title “Jew hatred on tour.” “The undoubtedly gifted bassist, singer and composer Roger Waters manages to fill many arenas,” it states. But the “first half of the phrase ‘exceptional artist’” refers not only to his abilities as a musician, but also to the “tirades of the bard of hate.” He spreads “sheer anti-Semitism,” “conspiracy theories” and lies and false accusations about the Jewish state, the paper writes. He accuses U.S. President Joe Biden of “fuelling the fire in Ukraine, which constitutes a major ‘crime.’”

The article bluntly advocates cancelling Waters’ tour and preventing it from taking place, as has already been done in Poland. He was now only invited-to concerts because there was “good money to be made” from them, it says.

The Jüdische Allgemeine is published by the Central Council of Jews in Germany, which is prepared to justify any crime committed by the Israeli government.

In the recent Israeli parliamentary elections, the fascist Religious Zionist League became the third strongest party. Its spokesman, Itamar Ben-Gvir, who has been convicted several times of racist agitation, could become police minister under Benjamin Netanyahu. Under the previous “government of change” led by Yair Lapid, more Palestinians have been murdered in the occupied territories than under any other government since 2005.

The campaign against Roger Waters takes such vicious forms because he is popular among his fans not only as an outstanding musician but also because of his political courage in defending the oppressed. In the U.S., a million spectators attended his This Is Not a Drill concerts, and packed arenas and stadiums are expected in Europe as well.

The mood of broad sections of the population is at odds with official propaganda. This applies both to the oppression of the Palestinians and to the NATO war against Russia. There is a tremendous need for alternative viewpoints and information.

This is shown, among other things, by a video in which former Moscow correspondent Gabriele Krone-Schmalz takes a critical look at the role of NATO in the Ukraine war, which went viral on YouTube and was viewed a million times. The media also unleashed a poisonous smear campaign against it. The ruling elites and their mouthpieces know only one response to the growing opposition—witch-hunts, slander and censorship.