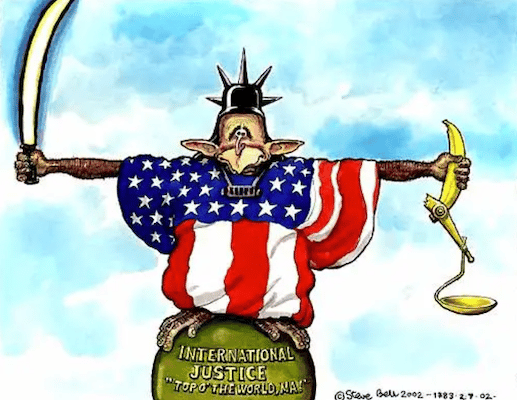 The quote above does not come from President Putin of Russia or from President Xi of China. It comes from David Scheffer, former U.S. Ambassador-at-Large for War Crimes Issues (1997-2001) in the Clinton administration and lead negotiator for the United States during the creation of not fewer than five international criminal tribunals, namely for ex-Yugoslavia, Rwanda, Sierra Leone, Cambodia and the International Criminal Court (ICC).

Scheffer used the battering-ram image while talking about the first international criminal tribunal established in May 1993, the International Criminal Tribunal for Yugoslavia. He said:

By then, the tribunal was a potent judicial tool, and I had enough support from President Clinton, Secretary of State Madeleine Albright, Secretary of Defense William Cohen, and other top officials in Washington to wield it like a battering ram in the execution of U.S. and NATO policy. (All the Missing Souls, A Personal History of the War Crimes Tribunals, Princeton University Press, 2012)

This quote is important today as calls resound to bring Russian citizens and the president of Russia before international criminal courts, whether they exist or are being planned. The calls are being issued by NATO countries, the European Union as well as by UN organizations and by the obedient Western media. 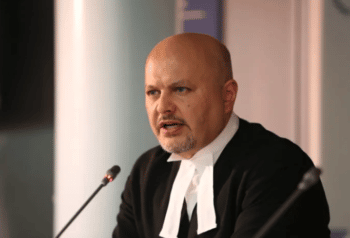 NATO and European Union strategy is becoming clear. Their goal is to weaponize international criminal justice and human rights, today against Russia, today and tomorrow against China or any other country that dares to say NO to what the United States and its allies or vassals are trying to impose—or save. Here are a few examples:

In March 2022, the UN Human Rights Council appointed Judge Erik Møse to head the UN Commission of Inquiry on Ukraine that would investigate alleged crimes in Ukraine that could lead to indictment of Russians. Møse was judge at the International Criminal Tribunal for Rwanda from 1999 to 2009. (see below) 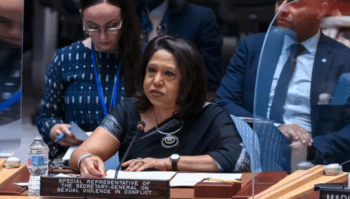 Equally unsurprisingly, no mention was made about the well-documented crimes of the Ukrainian Army from 2014 on, particularly in the Donbas. 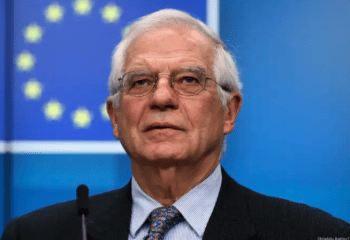 The Special Representative of the UN Secretary-General in charge of issues related to sexual violence, Pramila Patten, declared at a Paris press conference on October 14 that acts of rape, mutilation and sexual aggression were part of the Russian military strategy. She also claimed that Russian soldiers were equipped with Viagra. She presented no evidence, but simply parroted the report of the Commission of Inquiry led by Judge Møse referred to above.

The product of a unipolar world order 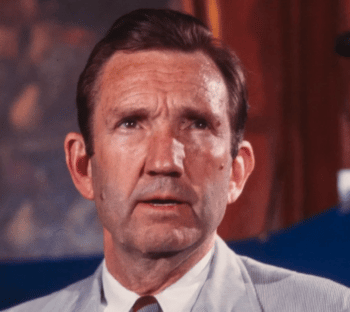 The fact that the first international criminal tribunals after Nuremberg were created in the 1990s is significant. It would not have been possible before 1990.

According to the late Ramsey Clark, former U.S. Attorney General,

There would be no UN had it been implied in any way in the Charter that there would be a criminal tribunal. If it had been put in directly, the meeting would have been over. People would have packed their bags in Washington before the San Francisco meeting and left. The United States would have been the first to leave. (Rwanda and the New Scramble for Africa, p. 171)

The tribunals established in the 1990s are a pure product of the New World Order announced by George H. W. Bush after the fall of the Soviet Union. It was to be a unipolar world order led by the United States. The U.S. would control the international institutions, make the laws, identify the guilty people, indict, try and punish them, while remaining unaccountable for their own acts. The Clinton administration took over in 1993 to lead the creation of the tribunals that his negotiator boasted about as a “battering ram in the execution of U.S. and NATO policy.”

I wouldn’t underestimate the central wrong of selecting people for prosecution. It’s enemies they’re choosing. It really is war by other means and it’s very cruel. (Ibid., p. 185) 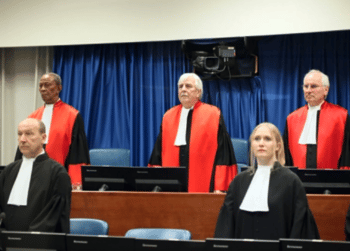 The International Criminal Tribunal for Yugoslavia (ICTY) was reminiscent of a Stalinist show trial where mainly Serbs, but no U.S. or NATO officials, were prosecuted. [Source: icty.org]

That is how the tribunals operated. In ex-Yugoslavia, mainly Serbs were indicted, but not a word was mentioned about NATO’s massive bombing and destruction of ex-Yugoslavia.

The International Criminal Tribunal for Rwanda was probably the worst case of victors’ justice. Whereas war raged when the events in question took place, only members of the former government or opponents of the Rwandan Patriotic Front (RPF) and its leader Paul Kagame, who was backed by the U.S. and UK, were indicted.

Despite irrefutable evidence of crimes committed by the RPF and by Paul Kagame himself—who triggered the mass killings in Rwanda by invading the country illegally from Uganda, and as evidence indicates, shot down the airplane of Hutu president Juvenal Habyarimana—he and his entire army have enjoyed total impunity.

What has happened to the people the International Criminal Tribunal for Rwanda acquitted, sentenced or sentenced and eventually freed? In short, some of the acquitted or “freed” people are still under house arrest in Niger years after they were acquitted or “freed,” stateless, without papers, without the right to join their families, and/or abandoned by an international kangaroo court. 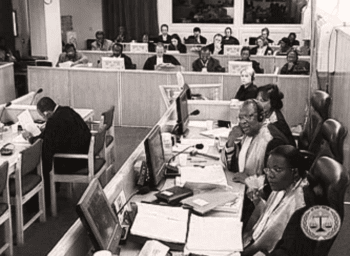 The International Criminal Tribunal for Rwanda was as heavily politicized if not more than the tribunal for Yugsolavia. [Source: unictr.irmct.org]

Others are sent to 21st century penal colonies in Benin, Mali, and Senegal, but not to The Hague, headquarters of the ICC. It is a judicial apartheid for Africans. The question arises: How could the UN High Commission on Human Rights entrust the inquiry into crimes in Ukraine to a judge like Erik Møse who left such a flagrant violation of human rights in his wake and who has been silent about solving the problem?

Déjà vu all over again

The current calls to indict Russian authorities, citizens and the president of Russia resemble exactly what NATO did in 2011 to Libya and to Muammar Gaddafi.

In March 2011, shortly after U.S. Ambassador to the UN Susan Rice declared that Qaddafi was providing Libyan troops with Viagra to help them rape women, the very obedient ICC prosecutor Luis Moreno Ocampo, upped the ante, saying that Qaddafi had ordered that hundreds of women be raped and that Gaddafi himself “decided to rape.” He produced no evidence.

The UN Commission on Human Rights also quickly sent investigators to identify the crimes committed, including rape and the use of Viagra by the Libyan Armed Forces. When their report came out in March 2012, the investigators concluded that there was no evidence of any systematic policy of sexual violence. 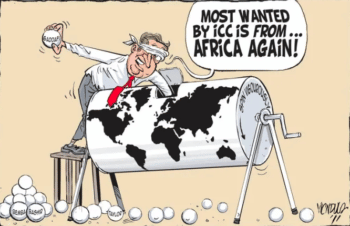 Nonetheless, Moreno Ocampo insisted that the new Libyan authorities had irrefutable evidence to that effect. He appeared to want to provide more propaganda to justify the destruction of Libya and the assassination of Muammar Qaddafi on October 21, 2011. (Source: Slouching Towards Sirte: NATO’s War on Libya and Africa, Maximilian Forte, Baraka Books, 2012, pp. 253-256.)

Russia is not Libya

Fortunately, Russia is not Libya and the unipolar world is sputtering out. Yet old habits die hard and can continue to destroy people and lives.

Although the promoters of so-called international criminal justice are going to have a hard time making their dreams come true, they can still score propaganda points, especially when most of the Western media are satisfied to parrot NATO and EU spokespeople.