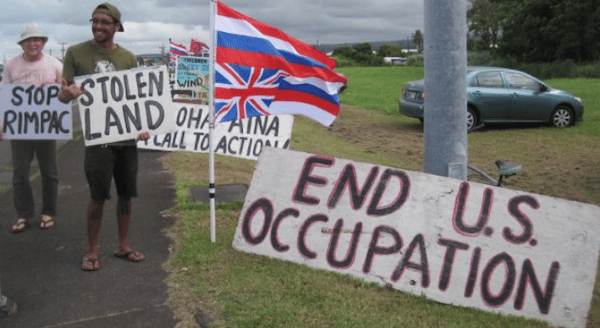 Dear Readers:  A short quiz:  How did Hawai’i legally become part of the United States? 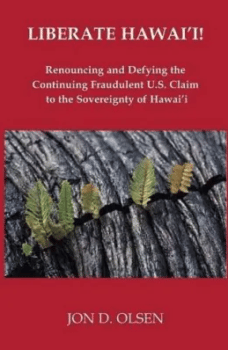 The correct answer is G. As I pointed out by analogy in my 2014 book, LIBERATE HAWAI’I! Renouncing and Defying the Continuing Fraudulent U.S. Claim to the Sovereignty of Hawai’i, visualize this scenario:

You come home from work one day to your many generations’ family property where you have lived all of your life and find that a team is removing your belongings to the front lawn. And when you indignantly demand to know what is going on, two policemen and the county sheriff advise you that the new owner is taking possession.

You protest adamantly that you never sold the property to anyone; this is your home! The sheriff then shows you a folder with a deed for the property that indicates that you had signed a power of attorney to another person, one you know but never trusted, and that, under its terms, he had the right to convey your property, and had done so to the “new owner.”

You are then, of course, astounded, proclaiming loudly that you have never signed such a power of attorney, and that any claim to have done so was fraudulent, and the purported signature is a forgery. The sheriff shrugs his shoulders and says, “Then take it up with the judge,” and walks away. Lacking any other recourse, you take it up with the judge who reviews the situation and declares, “Well, there seems to be some impropriety here, so I will rule that the new owner allow you to build a small residence on the back end of the property so you will not be homeless. Case dismissed. 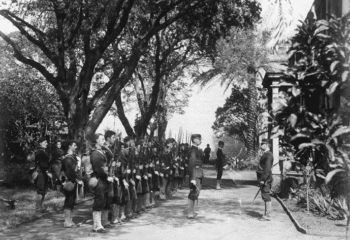 That folks is what happened in 1898 in Hawai’i. In 1893, when much to her surprise and dismay, a delegation of 160 armed men from the USS Boston landed from Honolulu Harbor and took up positions facing Iolani Palace, then the seat of government of Queen Lili’uokalani, in support of a proclamation by Caucasian Hawaiian residents, less than twenty in number, who claimed to be “the Provisional Government of Hawai’i” which later declared itself to be The Republic of Hawai’i.

Not a single Native Hawaiian, then by far the great majority of the population, had a role in this coup nor had approved it. The claim to be the government of Hawai’i was fraudulent and the purported “treaty” (that never passed anyway) amounted to forgery. Thus, all subsequent iterations—Republic of Hawai’i, Territory of the U.S., State of the U.S.—are null and void.

These insurrectionists then hustled off to Washington, D.C., where newly elected President Grover Cleveland received their message asking for annexation of Hawai’i. But at the same time, a delegation representing the Hawaiian majority arrived with the opposite message. He then declined to pursue annexation but sent a representative to investigate first hand. 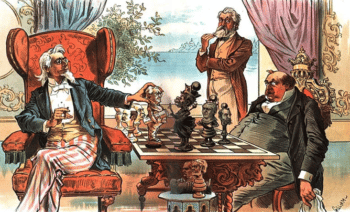 After several months had passed, a comprehensive report was delivered to President Cleveland and he gave a speech to Congress on December18, 1893 (reprinted as appendix A in LIBERATE HAWAI’I!), in which he referred to the actions of U.S. authorities as “an act of war” against a peaceful and trusting people.

What ensued was stalemate for the next four years until William McKinley was inaugurated, followed shortly by the Spanish-American War in 1898, with the consequent ceding of Spanish colonies in the Philippines, Guam, Puerto Rico and Cuba. Hawai’i had never been a colony of Spain or any other country, but for 50 years had been recognized as an independent country, with consulates and embassies all over the world.

The cousin of Sanford Dole, who was integrally involved with the coup against the queen, and subsequently was president of the purported “Republic of Hawai’i,” was James Dole, founder of Dole Plantation of pineapple fame. Thousands of acres of pineapples, which grow from the stiff-leafed crown at the top of the fruit, were planted over decades until it became far more profitable to export the operations to Asian countries and to use the limited Hawai’i lands for extensive suburban subdivisions. These homes now each sell at hundreds of thousands of dollars. These many thousands of homes are packed like sardines, often so densely that a decent athlete could jump from one roof to another. 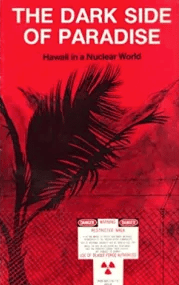 During the century following the alleged “annexation,” five major corporations evolved to control commerce in and out of Hawai’i and the retail business derived from imported goods.

The power of the Republican Party to which these local oligarchs belonged, who intermarried and evolved interlocking directorates, was not broken until the 1950s when a coalition of strong labor unions, Japanese World War II veterans, and the Democratic Party unseated them and have controlled Hawai’i continually since, with the exception of two terms of Republican Linda Lingle in the first decade of the 21st century. The legislature is overwhelmingly populated by Democrats.

Prior to the purported “annexation,” and a major reason for it, was the desirability by advocates of manifest destiny of securing the world-class harbor called Pearl Harbor (where no pearls at all are likely to be found now as a result of contamination).

During World War II, further tracts of land were seized, including the eighth largest island of some 28,000 acres called Kaho’olawe, which they used for decades for bombing practice, like the islands of Vieques and Culebra in Puerto Rico. In the 1970s, protests against this desecration of the land by Hawaiian activists generated much sympathy among the population and, in 2003, the island was finally relinquished to the government of Hawai’i with significant stewardship granted to Hawaiian organizations. 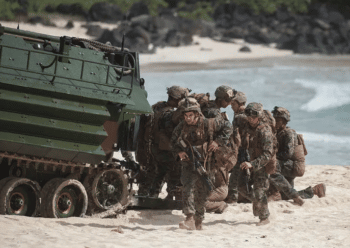 Under McKinley, a new attempt at an annexation treaty was made, but it failed even on procedure, not getting the two-thirds majority in the Senate. However, that failure was dwarfed by an even greater flaw: The U.S. had no right at all to make the attempt as the alleged “Republic of Hawai’i” was an illegitimate coup-government as declared so by none other than President Cleveland himself.

The history of the U.S. military’s occupation, control and desecration of the land and sea could easily fill substantial books, one of which was written in the seventies: The Dark Side of Paradise. For several decades, including 2022, there have been ecologically devastating military “exercises” in which not only the U.S., but numerous other countries are invited to bomb and strafe isolated parts of land and ocean sites.

They then used a sleight of hand and passed by simple majority a “Joint Resolution of Congress,” pretending that it was equivalent to a treaty. Due to the threat of military force, the only thing that changed was control, not sovereignty.

The legal status remains problematic: Hawai’i is a country whose government was overthrown by the threat of force, and occupied by that very first U.S. regime change. Such an action does not convey sovereignty over it by occupation, any more than say the U.S. occupation of Japan after World War II or when the government of Saddam Hussein was overthrown. Neither Japan nor Iraq ceased to exist as a country. 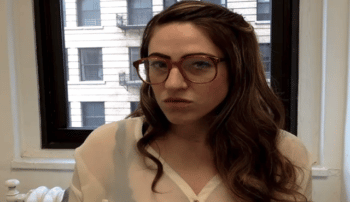 In recent decades, Hawaiians have been intensely studying their own history, none more so than Dr. Keanu Sai. Virtually all those who are familiar with the subject would say Dr. Sai, who took a related case to the International Court of Arbitration in 2000-2001, is the world authority on the subject.

In recent years, the National Lawyers Guild and the International Association of Democratic Lawyers have come to the same overall conclusions presented in LIBERATE HAWAI’I!, all of which owe their understanding to Dr. Sai, as foremost among many who have contributed to this study. Consequently, while few outside Hawai’i have this grasp of history, tens of thousands of Hawai’i residents understand it well.

Hawaiian activists are not alone; they have important allies. Among them is the International Association of Democratic Lawyers (IADL), whose president, U.S. attorney Jeanne Mirer, is quoted as saying:

As an international organization of human rights lawyers dedicated to the furtherance of peace, justice and the rule of law, the IADL reiterates its support for the Hawaiian Kingdom and the people of Hawai’i in their ongoing struggle for sovereignty and self-determination. The United States has an obligation to comply with international humanitarian law and the law of occupation.1

As an organization that values human rights and the rights of ecosystems over property interests, the NLG supports all native peoples’ right to self-determination and resistance against settler-colonial oppression—whether it be in Palestine, Standing Rock, or Hawai’i. The U.S. is no exception to standards set by international and humanitarian law, and must end its occupation of the Hawaiian Kingdom.

the United States has been unlawfully imposing American municipal laws over the territory of the Hawaiian Kingdom in violation of international laws and the law of occupation.3

Nota bene: While most of these provisions directly impact the U.S.-Hawai’i situation, the final one also imposes obligations on the part of those many countries which had recognized Hawai’i as an independent country (cited in LIBERATE HAWAI’I!) and with whom it had established normal diplomatic relations, including mutual embassies and consulates. Some activity in this regard has already been initiated by the Acting Hawaiian Kingdom government.

In a deliberate move to enforce compliance with international law, the International Association of Democratic Lawyers (IADL) and the American Association of Jurists—Asociación Americana de Juristas—(AAJ), sent a joint letter to all the missions accredited to the United Nations in New York City and in Geneva regarding the prolonged and illegal belligerent occupation of the Hawaiian Kingdom by the United States since January 17, 1893.* The joint letter was sent on February 16, 2022.5

*The day the queen was forced by the presence of hostile armed forces of the United States to, in her words, “yield my authority” until the matter could be resolved in Washington, D.C. This was a pledge to neither surrender nor engage in armed resistance, given the disproportion of lethal force, relative to each side. 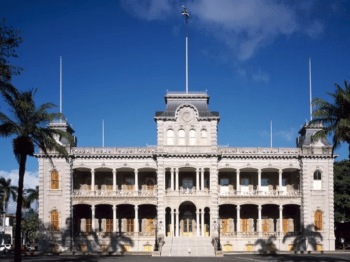 This is a legal case arguing all of the above and filed by the Hawaiian Kingdom, naming as Federal Defendants: Joseph Robinette Biden, Jr., Kamala Harris, John Aquilino, Commander, U.S. Indo-Pacific Command, Charles P. Rettig, Commissioner of the Internal Revenue Service, Charles E. Schumer, and Nancy Pelosi. On “Friday August 12, 2022, District Judge Leslie Kobayashi filed a Minute order taking under advisement the Hawaiian Kingdom’s Motion to Certify for interlocutory appeal her Order of July 28, 2022, denying the Hawaiian Kingdom’s motion for reconsideration of her previous Order granting the Federal Defendants motion to dismiss the amended complaint.”6

The federal government takes the position that this is a “settled matter,” and treats objections to that claim as essentially frivolous, but fails to acknowledge that the U.S. in fact “recognized the Hawaiian Kingdom as a sovereign and independent State on July 6, 1844, by letter of Secretary of State John C. Calhoun on behalf of President John Tyler, and later entered into treaty relations and the establishment of embassies and consulates in the two countries.

In effect, despite a desperate attempt by the U.S. to find a way out, this is a legal checkmate and victory for Hawai’i.